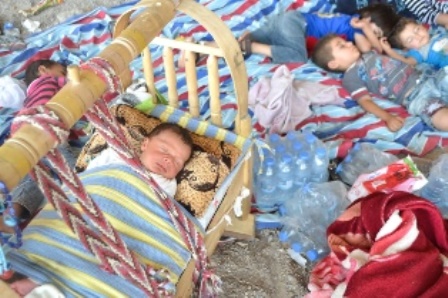 Refugees from Mosul or towns on the Nineveh plain seeking shelter under a highway near Dohuk in the Kurdish region.
They fled the violence caused by IS.
August 7, 2014
Courtesy of Capni

Declaring the plight of Christians in the Middle East a “state of emergency,” evangelical and Protestant churches in Syria and Lebanon have issued a plea for Western advocacy and aid.

The Supreme Council of the Evangelical Community in Syria and Lebanon, meeting in Beirut on Aug. 29, issued an “urgent appeal” for political action and humanitarian aid to avert what it calls an “existential threat” to Christianity in the region.

“This is especially important with regard to halting the flow of finances and arms to the ‘takfiri’ and radical groups,” the statement read. “We urge you to influence these governments in order to put pressure on the international and regional powers that support these radicals.” Takfiri is a word used to describe Sunni Muslims who regard other Muslims as apostates, and non-Muslims as infidels who deserve death.

• A strategy to “support Christian presence in the East.”

“This has been, and must continue to be, achieved through the strengthening of educational and social institutions that have, and continue to contribute vigorously to the rejection of radicalism and violence,” the statement said.

• Food, water, medicine and other humanitarian aid to war victims and refugees forced to flee violence.

“Our hope is that you act swiftly before it is too late,” the statement concludes.

The council’s statement is directed to evangelical and Protestant Christians, urging them to “act as soon as possible.” Even before the Aug. 29 statement, some church leaders had already begun to agitate for action. Two weeks earlier, the Church of England pointedly pressed UK Prime Minister David Cameron on what the Rt. Rev. Nicholas Baines, the bishop of Leeds, said was an unclear strategy.

“[W]e do not seem to have a coherent or comprehensive approach to Islamist extremism as it is developing across the globe,” wrote Baines, who said his letter had the support of the Archbishop of Canterbury, Justin Welby.

On Sept. 4, prior to a meeting with US President Barak Obama ahead of a NATO summit in Wales, Cameron said he is open to UK airstrikes against the militant jihadist force that calls itself the Islamic State, and that he wants to provide Kurds in the north of Iraq with arms to help defend themselves and the hundreds of thousands of ethnic and religious minorities, many of them Christian, who have flooded the Kurdish region to escape IS death threats.

“[W]e must work with partners to put a fatal squeeze on the organisation, but it must start with helping those on the ground that are fighting this organisation,” Cameron was quoted as saying by the Guardian.

Inside Iraq, Chaldean Catholic Patriarch Louis Sako has put his name behind a month-old campaign to stop guaranteeing each religion a federal ministry seat. The “Ministries Without Quotas” campaign has proposed that appointments to the ministries of education, higher education, culture and sports be made based on merit, not sectarian affiliation, which the campaign says has produced ineffective government. Though not part of Iraqi law, the quota system was created after the US-led invasion that drove out Saddam Hussein, in an attempt to ensure that Sunni Muslims, Shiite Muslims, and ethnic Kurds are represented at the government’s highest level.

Sako “has blessed the campaign,” according to a Ministries Without Quotas statement published by Ankawa, an independent Iraqi news website.