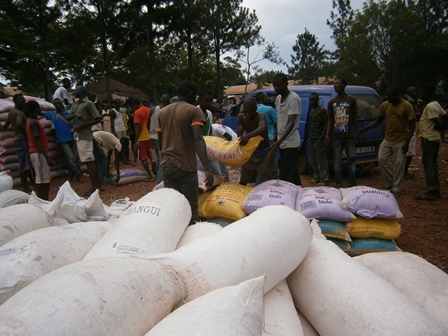 The UN has taken over peacekeeping in CAR amidst an upsurge of violence which has left scores dead, including two pastors.

Ouanam, of the Evangelical Church of Brethren, was killed Sept. 2, when armed men stormed the northern town of Nana Bakassa. The attackers arrived on motorbikes, and for about five hours they looted properties before leaving the town, local sources told World Watch Monitor. Three other people were killed while others took refuge in the bush or in surrounding towns such as Bossangoa. Ouanam is survived by a wife and 4 children.

In the second attack, on Sept. 8, Bapteme, a deacon and three choir members were shot dead in the compound of Elim Church, at Ngakogbo, 70 kilometres from Bambari, which was engulfed by deadly clashes in July and August.

Bapteme leaves behind a wife and four children.

More than 100 people were killed – some by gunfire and others by machetes — in the attack, which sent terrorized villagers fleeing into the bush in search of safety.

Another pastor, injured during the Ngakogbo attack, explained to World Watch Monitor the circumstances of the violence. 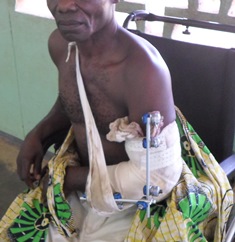 Lucien Imbi of Apostolic Church said the trouble started Sept. 6 as Fulani herdsmen, linked with Séléka rebels, clashed with anti-Balaka militiamen. The violence continued the following day and resulted in the death of 4 Fulani fighters. This prompted violent Séléka retaliation against the Christian population.

“When Séléka arrived around 12.30, we hid at Elim Church,” Imbi said. “To our surprise, three Séléka elements broke into the church and forced us to come out. They then asked each of us to state our identity.

“Then they took us, one after the other, adding: ‘What should we do with pastors when ours are killed by your brothers anti-Balaka?’ When they started to shouting, I fell on the ground. It was then I realized a bullet hit my left arm. ”

“The Seleka waited for a while to ensure that we were really dead before leaving,” Imbi said. “I crawled, with great pain, to my home, leaving the lifeless bodies of Pastor Bapteme and four members of his church on the ground”.

Imbi was hospitalized, but said his injuries are not life threatening.

The Alliance of Evangelicals in Central Africa has condemned the killings. In a statement issued Sept. 8, the Alliance expressed concern over the “scenes of killings organized by the armed gangs, for unknown motives, and perpetrated mainly against places of worship, ecclesiastical leaders and church members.”

It also called on the transitional authorities to protect all citizens. It also urged international forces to fully implement their United Nations mandate, which requires the protection of citizens, the disarmament of armed groups and the implementation of the Disarmament, Demobilization and Reintegration process.

It is in this volatile climate that, on Sept. 15, the UN took over peacekeeping operations. Some 6,000 troops already deployed in CAR have swapped their green African Union helmets for the blue of the UN. In total, 12,000 troops are expected to form the UN force, called MINUSCA after its French acronym.

The deployment of UN troops has received a cautious welcome.

“The switch from AU to UN peacekeepers must be more than a cosmetic change, the swapping green berets for blue helmets. Instead, it must serve as a fresh start for the peacekeeping operation in CAR,” said Steve Cockburn, Amnesty International’s deputy regional director for West and Central Africa. “The gap between the number of peacekeepers promised and the number deployed must be urgently filled. Only once the full force is on the ground, undertaking patrols and protecting CAR’s civilian population, can the UN properly fulfil its protection mandate.”

Claude Cafardy, Deputy Head of Mission in the CAR for Doctors Without Borders, sounded more pessimistic.

“It seems that forces will look different. But right now, we are not confident [in] their efficiency in the coming months in CAR,” Cafardy said.

Since independence in 1960, about ten peacekeeping missions have been deployed in CAR, and so far have failed to bring a lasting stability in the country.