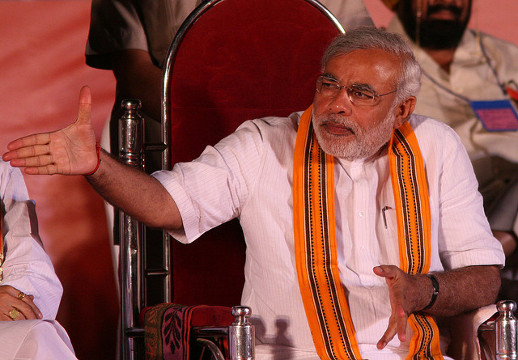 An Indian couple who married Sept. 26 had their marriage annulled five days later by police under pressure from Hindu nationalists.

The couple, Joseph Pawar and Ayushi Wani, were arrested in Gujarat after complaints that Pawar, a Christian, had lured his Hindu bride into marriage.

The forced dissolution of the marriage quickly drew protets from India’s Christian groups, who have attempted to put pressure on Narendra Modi, the new prime minister of India, for what they say is his persistent silence in the face of increased violence towards Christians and other religious minorities.

In a report issued in New Delhi on Sept. 27, a group of Indian religious leaders accused Modi of remaining mute during 600 incidents targeting religious minorities since his landslide election victory in May.

At the same time on the other side of the world, during Modi’s five-day visit to the United States in late September, neither he nor his hosts said a word about evidence indicating growing sectarian hostility at the hands of nationalist Hindus, whose political party, the Bharatiya Janata Party or BJP, swept Modi into national power.

The Sept. 30 meeting between Modi and U.S. President Barack Obama — the first summit involving the leader of one of the world’s oldest democracies, and the leader of the largest — did not produce any public mention of religious freedom of any sort.

Diplomatic silence on the subject perhaps was to be expected. The U.S. had denied Modi a visa in 2005 when he was chief minister of the Indian state of Gujarat, where, in 2002, Hindu riots killed more than 1,200 people, mostly Muslims but also Christians. As Modi has led the BJP to control of the national government this year, Hindu violence against minorities, including Christians, has spiked.

Now prime minister of a country that claims one-sixth of the world’s population, Modi was not subjected to any official public reminder of the sectarian violence to which he was connected, or the rebuff America had dealt him nearly 10 years ago.  The words religion, religious, and Christian did not appear among the nearly 6,900 words that made up the leaders’ joint statement, their public individual remarks, the US-India joint strategic vision statement, or Modi’s  speech three days earlier to the United Nations General Assembly.

Others were not concerned with diplomacy. Outside New York’s Madison Square Garden on Sept. 28, protesters made a point of connecting Modi to the Gujarat violence, and accused him of supporting the murder of Christians, Muslims and even Hindus in India. Inside the arena, more than 18,000 people, mostly Indian expats living in America, gave Modi a rock-star reception to a speech he made in Hindi.

On the day of Modi’s arrival in the U.S., Sept. 26, a group called the Coalition Against Genocide released a letter, signed by 11 members of the U.S. House of Representatives, that urged Obama to “discuss religious inclusion and the protection of religious minorities in India.” Referencing Modi’s connection to the 2002 violence, the letter said Modi “can play a constructive role by criticizing extremists and opening a dialogue in the country about violence aimed at religious minorities.”

None of the 11 House members released any public statement about the letter or their support of it. One of the 11, Keith Ellison of Minnesota, is content to let the letter speak for itself, his press spokesman said.

The letter recalls Modi’s post-election address to India, in which he said “a government has only one religion – India first.”

“This statement is promising,” the joint letter said. “However, given the reported increase in violence against Christians and Muslims, the reality on the ground in India’s communities indicates that this promise must be followed by action.”

If the subject of religious freedom was raised during the private sessions between Obama and Modi, neither mentioned it in the subsequent public statements.

“During a private dinner we spent most of our time talking about the economy,” Obama said. The closest the two came to publicly referencing religious freedom was a mention in the joint statement about the “shared values, people-to-people ties, and pluralistic traditions” of India and the United States. And, in the strategic partnership vision statement was the acknowledgement that “our strategic partnership rests on our shared mission to provide equal opportunity for our people through democracy and freedom.”

“The first 100 days of the new regime have, however, seen the rising pitch of a crescendo of hate speech against Muslims and Christians. Their identity derided, their patriotism scoffed at, their citizenship questioned, their faith mocked.”

While the talk in Washington was of shared values and economic opportunity, back home, fears and anguish were growing over Modi’s “silence” in the face of increasing verbal and physical attacks on Christians and Muslims alike.

More than 500 people took part in the four-hour protest Sept. 27 in New Delhi, at which a report titled “100 days under the New Regime – the state of Minorities” was released by bishops of different denominations along with Christian, Muslim and secular activists.

“The first 100 days of the new regime have, however, seen the rising pitch of a crescendo of hate speech against Muslims and Christians. Their identity derided, their patriotism scoffed at, their citizenship questioned, their faith mocked,” said a press statement about the protest, providing a summary of the 92-page report compiled by Christian and other activists.

“The environment has degenerated into one of coercion, divisiveness, and suspicion. This has percolated to the small towns and villages of rural India, severing bonds forged in a dialogue of life over the centuries,” the statement read. “The attacks have assumed alarming proportions.”

It said more than 600 incidents targeting religious minorities occurred between May to September, especially in areas that have held, or soon will hold, legislative elections.

“Both democracy and secularism are in grave danger under the government led by Modi,” said Sheba Farooqui, of the All India Democratic Women’s Association. “The condition of minority communities is dilapidating day by day due to indifference meted out and apathy shown by the government.”

A C Michael, one of the protest organizers, told World Watch Monitor that “the common refrain was the silence of Prime Minister Modi.”

Almost all the speakers “expressed shock over the silence of the Prime Minister on the increasing violence against minorities,” said Michael, a former member of the Minority Commission of Delhi.

“The sad part is that the Prime Minister does not speak either in public or in (his) party against those indulging in hatred,” said John Dayal, an outspoken Christian activist and secretary general of the All India Christian Council.

The 92-page report was endorsed by 33 groups, representing different faiths and secular groups.

“If solution to this menace is not meted out now, then in the coming times minorities will even lose their power of speech and expression,” said Muslim activist Zafur-ul-Islam. “We have contributed a lot in nation building and we are also citizens of this country, as other communities are.”

Said Bishop John Simon of Believers Church: “The Christians have done much admirable work in almost every social sphere, including health and education. Our contribution needs no elaboration. We have to get united in order to fight for our rights.”

The protesters rejected Modi’s call, made during his Aug. 15 Independence Day message, for a “10-year moratorium on religion-based violence.”

“India has no place for hate and needs not a ten-year moratorium, but an end to the communal and targeted violence against religious minorities,” the report said.

“The blatant support from central (federal) and local political leaders to antisocial groups has triggered violence in many places,” the press statement concerning the report said.

Unfazed by the criticism, the BJP in a brazen step has decided to praise 63 party workers who were jailed after the July 4 street violence in Moradabad in northern Uttar Pradesh state, in which the district magistrate was seriously injured, the Indian Express reported on October 2.  The BJP supporters had clashed with police after a meeting called to protest the removal of a loudspeaker from a temple in the town was disallowed.

Of the 600 incidents listed in the report, Muslims were the most frequent target, while Christians accounted for about three dozen. But it was an incident involving Christians that prompted the protest.

Christian leaders had met in New Delhi in late August following widespread reports that 72 Christians had “voluntarily” abandoned their faith, and that the Seventh-Day Adventist church had been “purified” and converted into a Hindu temple in a village about 160 kilometres southeast of New Delhi.

An ecumenical team visiting the village discovered the supposed mass conversion was a sham, and that a dozen pastors had been detained and beaten by police at the urging of a local BJP leader.

“The Christian community, its pastors, congregations and churches, were targets of mob violence and impunity in dozens of cases in Uttar Pradesh, Madhya Pradesh and Chhattisgarh (states),” said the report, put together by several committees comprising of lawyers, activists and others.

The press statement summarizing the report claimed that anti-minority forces have set dates, including Christmas 2014, to “cleanse” various areas of Muslims and Christians, with the assistance of police. And it said there have been “attempts at religious profiling of Christian academic institutions, and their students” in New Delhi.

Looking beyond India to the U.S., the statement criticized the decision of Southern University, in Louisiana, for its offer of an honorary doctorate to Modi “for his work in inclusive growth and in recognition of his contribution towards social transformation, ‘especially for empowering women and minorities in Gujarat.’ ”

“The facts on the ground,” the statement said, “are very different.”

On eve of the New Delhi protest, a church was torched at Pakritola Ghutas village in Mandla district of central Madhya Pradesh state. The police dismissed it as the act of “inebriated” hooligans who broke into the church and set on fire religious books, furniture, musical instruments and the altar.

Angered at the forced breakup of the Sept. 26 marriage of Joseph Pawar and Ayushi Wani, the Global Council of Indian Christians attempted to stage an Oct. 1 rally near the couple’s hometown of Jorbat, in Madhya Pradesh state. On Sept. 30, government authorities issued an order forbidding the gathering, citing vows by nationalist groups to hold demonstrations of their own until Wani, who had taken refuge with a women’s-support group, was returned to her family. Council President Sajan George called the edict “a travesty of justice.”

The BJP is the majority party in Madhya Pradesh’s state government.

Separately, the Religious Liberty Commission of India petitioned Madhya Pradesh Chief Minister Shivraj Singh Chouhan directly, with an Oct. 7 letter that cited the police arrest of Pawar the “most outrageous” of several incidents documented in the letter. Commission National Director Rev. Vijayesh Lal cited the Sept. 27 burning of a church, and a Sept. 12 arrest of seven Christian church workers on what he said were false accusations of attempting to gain converts with money, among other affronts.

“It seems strange that the district administration is succumbing to the pressure of lawless elements,” Lal wrote to the chief minister, a member of the BJP. “It is also transgressing on the Constitutional Right of Freedom of Religion, and Freedom of Expression. This will undoubtedly make the lawless elements stronger while coercing those who are peaceable and abide by the law.”

Lal asked for the chief minister’s “personal intervention to restore the confidence of the minority Christan community.”