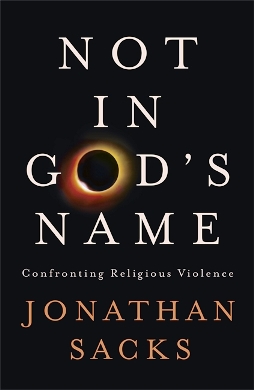 Ten years on from the 7/7 London bombings, in which 52 people were killed and hundreds were injured by four separate suicide bombers, the world is still looking for an answer as to why religious people kill in the name of God.

So starts the first line of Jonathan Sack’s new book, Not in God’s Name: Confronting Religious Violence, revealing a book bv a believer distressed not only by the violence, but puzzled by the theological tragedy that drives the violence.  He wants to know what makes religious people kill in the name of God, and shows broad learning in evolutionary biology, social psychology, sociology and theology to present an argument that is sure to enlighten as well as provoke.

Sacks is well placed to muse on this theme as the former Chief Rabbi of Britain and a prolific author on religious conflict.  In fact, he has carved out a niche for himself as the man who gave theological coherence to the Samuel Huntingdon “clash of civilisations” thesis while also critiquing it. Sacks’ 2004 book, The Dignity of Difference: How to Avoid the Clash of Civilisations, remains one of the wisest texts for negotiating religious pluralism in the modern world.

Sacks has no time for the politician’s mantra that violence committed by religious extremists like ISIL has nothing to do with Islam.  Yes, the vast majority of the conflicts in the world today are nothing to do with religion, but “when terrorist or military groups invoke holy war, define their battle as a struggle against Satan, condemn unbelievers to death and commit murder while declaring ‘God is great,’ to deny that they are acting on religious motives is absurd” (p.11).  Harder work needs to be done to glimpse the twisted logic and primitive psychology of these groups, he says, otherwise the proffered solutions will never create a compelling enough counter-narrative that weans believers from hate to love, and to value weakness rather than power.

Religious violence is rooted in the same source as all violence – identity wars, and Sacks worries that the West, which secularized so merrily, has created societies and institutions that cannot provide enough identity because it has forgotten humans are meaning -seeking creatures; “The result is that the twenty-first century has left us with a maximum of choice and a minimum of meaning” (p.13).  Having thought religion was finished, now the West has seen it roar back – partly because of the vacuum secularisation created and, tragically, the religion that has returned is not gentle or ecumenical, but adversarial and aggressive.  Make no mistake he warns “the greatest threat to freedom in the post-modern world is radical, politicised religion” (14).  So if you don’t realise you are dealing with religion – however twisted – you are not going to find any meaningful responses.

So Sacks takes us on his epic journey to the roots of the problem. First stop is evolutionary biology and the fact that humans always group; we are altruistic to our in-group, and aggressive to our out-group – which is where violence comes from.  We learn not to kill strangers through reciprocal altruism, and religion evolves as the main means of ensuring that groups of strangers do not keep killing each other.  So “violence has nothing to do with religion as such…it has to do with identity and life in groups” (p.39).

Yet we cannot do without an identity, and the chronic tribalism that fuels religious violence today has occurred primarily because the three great secular substitutes for religion – nationalism, communism and race – have failed to unite us according to Sacks.  People take up religious violence fundamentally because they long for a community that engages something greater than just the self he argues.

But the kind of religion that seduces them into violence as opposed to altruism is due to dualism for Sacks. Dualism, where God is split into a ‘good’ and an ‘evil’ Person, results in an attitude that sees the in-group as all good, and the out-group as all evil. Sacks urges us to take a tougher path, and see God as the source of bad as well as good, of “judgement as well as forgiveness, justice as well as love” (p.53).  A pathological dualism drives violence because it does three things: “It makes you dehumanize and demonize your enemies.  It leads you to see yourself as a victim.  And it allows you to commit ‘altruistic’ evil, killing in the name of God…” (p.54).

Sacks continues to build his case.  What then turns dualism into a pathology?  After all, not all dualists sign up to ISIS.  He turns to the cultural anthropologist Rene Girard, who argued that the best way for two rival groups to end a cycle of violence is to kill a third party, a scapegoat.  Of course, religion ritualized this, but for Sacks for many centuries, the way different religious groups avoided destroying each other was to scapegoat the Jews.  Girard and even Freud himself argued that it was not religion that led to violence, but violence that led to religion.  For Girard, the source of all violence was memetic desire, which is wanting what someone else has because they have it.  This is behaviour seen most baldly in the interactions of children, and since sibling rivalries are the spine of the book of Genesis – Cain and Abel, Isaac and Ishmael, Jacob and Esau, Joseph and his brothers – Sacks comes at last to his favourite ground – theology.

If anyone is interested in reading a thrilling and detailed guide to the stories of the book of Genesis, they could do worse than to enjoy the middle third of this book.  Sacks’s limpid prose, allied to wise exegesis, goes through the great family stories and shows that God never overlooks those he appears to reject – Ishmael, Esau – but actually blesses them differently.  In fact, he argues, God makes two promises, a humanitarian one to everyone because they are made in His image, and a covenant one to a specific group because they have been called His children.  In a striking reversal of sibling rivalry, the covenant promise to Isaac, Jacob and Joseph subverts the sibling rivalry, the pay-off being that if you can identify with your rival in a role reversal, you can find a better way to eschew violence.  That is what the best kind of religion offers, but one must attempt this whether from a religious motive or not.

Fundamentalism in religion subverts this he claims, because it “reads texts as if God were as simple as we are.” (p.207).   Sacks finishes up with a few prescriptions that are powerfully phrased but vague.

He may be a theologian but he is no policy wonk.  “We must put the same longterm planning into strengthening religious freedom as was put into the spread of religious extremism” he says (p.262).  And, “we must train a generation of religious leaders and educators who embrace the world in its diversity, and sacred texts in their maximal generosity.” (p.262). Noble imperatives, but it will take another kind of person than Sacks to convert these into workable policies and programs.

Sacks’ great gift to us has been to lift the lid on why someone can behead someone else, convinced they are bringing glory to God.  It is not enough to denounce it as merely pathological.  It has a pathology with a religious lineage.  Miss that, and you can never win.  Start there, and you are on your way.  Still a long way to go, but the only effective starting point – however unfashionable it may be to say – is to start with theology.  As he writes, “wars are won by weapons, but it takes ideas to win a peace.” This book, while not startling for its originality of thought, is so clear, cogent and wise, it must rank as a vital text for anyone aspiring to “win the peace.”

Not in God’s Name: Confronting Religious Violence is published by Hodder & Stoughton, London, 2015)