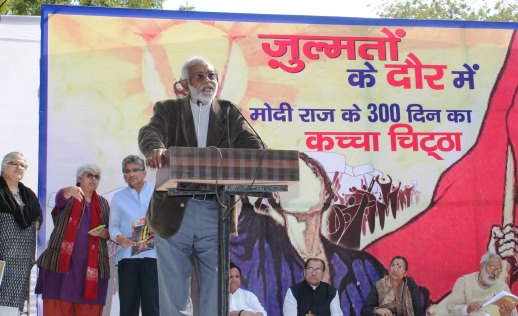 Hindu nationalists have hit out at Christians and Muslims in India, after the number of adherents to “Bharatiya” (traditionally Indian) faiths fell, according to the recently released results of the 2011 decennial national census.

Although the overall proportion of Christians fell marginally in the last decade from 2.34 per cent to 2.30 percent, there was a 13 per cent increase in the north-eastern state of Arunachal Pradesh, causing Hindus to complain of a “serious religious imbalance” in the state. Meanwhile, the Muslim population has grown from 9.8 per cent to 14.23 per cent in the past 50 years, leading one critic to go so far as to suggest Muslim families should be limited to only two children.

But Christian activist John Dayal said the “hysteria” was simply an attempt at hatemongering.

“All this fuss about census data is a precursor to social violence against non-Indic religions,” he warned. “There is nothing new in this campaign. There is a clear strategy to create a demographic hysteria against Christians and Muslims as outsiders.”

The Christian population has actually declined in five states, including the southern state of Kerala -the Christian heartland, where Saint Thomas is said to have first brought the message of Christianity. The proportion of Christians in Kerala has fallen from 19.1 per cent to 18.4 per cent of the 33 million population. In the 1960s the ratio of Christians was nearly 25 percent, but it has steadily declined ever since.

Dayal said that the Rashtriya Swayamsevak Sangh (RSS) Hindu nationalist group “wants to push forward a violent and exclusive concept of citizenship based on religion”.

Christianity and Islam, he said, are being branded as “foreign religions”, while other religions like Hinduism, Buddhism, Jainism and Sikhism are projected as “Bharatiya” religions.

A statement from the RSS singled out the rise of Christians in Arunachal Pradesh, the sparsely populated mountainous state home to only 1.3 million people.

“Religious imbalance of the population in the north-eastern states has assumed serious proportions,” the RSS statement said, in reference to four of the seven tiny ethnic states in the north-east (sandwiched between Bangladesh, Bhutan, China and Myanmar) being majority Christian, while Christianity is growing in the other three. 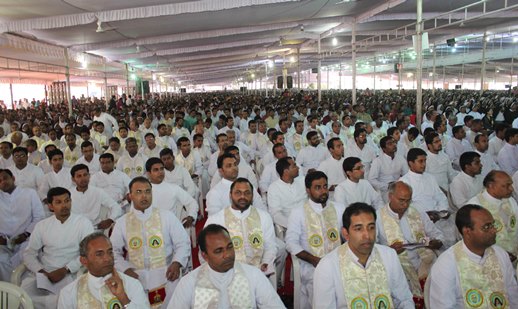 A Catholic crowd at a thanksgiving service in Kamalassery, Kerala, celebrating the canonisation by the Vatican of two Keralites, December 2014Photo: Anto Akkara

“The people of Arunachal are animists and not Hindus, as claimed by RSS. Yet, all the animists have been included among Hindus in census after census. Many of them are becoming Christians. That is why our numbers are growing,” he said.

“The pattern is the same in the other north-eastern states,” where ethnic tribal animists have embraced the Christian faith in large numbers, he said, adding that the RSS, with government support, tried to convert the animists of Arunachal to Hinduism and even enacted a law in 1978 to ban conversions. “But that had only little success,” he said.

The increasing numbers of conversions to Christianity in the north-east, the RSS statement said, threatened “the unity, integrity and [Hindu] identity of the country”.

However, Teki said: “We not anti-nationals. We are no less patriotic than any other. RSS is trying to generate hostility towards Christians.”

The RSS statement asking the government to “reformulate” a national population policy and prepare a national register of citizens came a week after Mohan Bhagwat, RSS chief, raised the issue in his annual address, which was broadcast nationwide by the state-controlled TV network, Doordarshan.

“Facts and figures of last two census reports and imbalances that have come to notice as a result are being widely discussed. Our present and future is getting impacted by the same … We need to rise above vote bank politics to formulate a holistic approach, equally applicable to all citizens, towards the population policy,” Bhagwat said.

Meanwhile, Pravin Togadia, working president of the Vishwa Hindu Parishad (World Hindu Council), claimed Hindus were in danger of “extinction” in a September article in RSS’s publication, “Organiser”. He also called for legislation to punish Muslims if they had more than two children. According to the 2011 census data, the Muslim community registered a 0.8% growth between 2001 and 2011, while the Hindu population declined by 0.7%.

“The issue of conversion, I suppose you are aware, has been mischievously publicised,” said Rev. Roger Gaikwad, general secretary of the National Council of Churches in India (NCCI), in an open letter to Prime Minister Narendra Modi in October.

“Still they keep misinterpreting church humanitarian services, such as education, health care and social service as enticements to convert.”