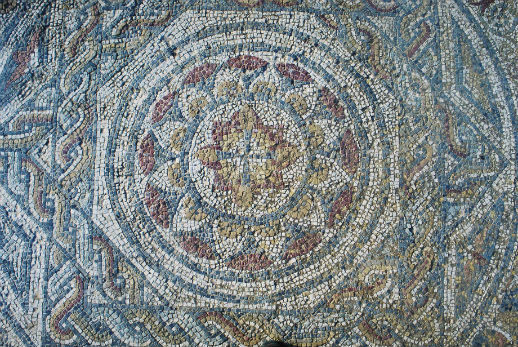 A mozaic of a cross in the ruins of Sabratha (80 km west of Tripoli) testifies to the country’s Christian roots.World Watch Monitor

‘Maizah’ saw no choice other than fleeing Libya.

She was beaten up by a group of bearded men, and offered the position of a fourth “wife”. She knew that as a Christian even her own family might kill her. Running away was her only option.

Now in her twenties, Maizah is still suffering from traumatic experiences. Even after finding refuge in a Western country, she is still afraid someone will find out where she lives and come after her.

Her appearance is quite changed from before. She wears a cross that is not hard to miss. Seated in her tiny living room on a red sofa, she talks about her life back in Libya.

“When I was eight years old, I asked my mother, ‘Where is God, what does he look like?’ ‘It’s not good to ask this,’ she replied angrily. ‘You should ask for forgiveness. God has no form.’ But I wasn’t convinced.

You should ask for forgiveness. God has no form

“I saw young girls going to a Sufi mosque to memorize the Quran. I wanted to go with them. My family was okay with that, but later that mosque was closed down.

“At nine, I went to a Salafist mosque. When the imam saw me wearing trousers, he began beating me. I ran out. I was looking for God, but this imam shocked me.”

After this, Maizah didn’t go to the mosque anymore.

As a teenager, she began again to search for God. “Someone told me about another mosque; she said that the people there were different. I went there completely covered with a scarf, even my hands were covered.

“The second time, I entered wearing trousers. I wanted to see what would happen. They accepted me. I memorized a lot of verses from the Quran. I liked the place.”

But Maizah’s comfort was short-lived. “In time they started to tell me ‘You have a beautiful body, why don’t you cover it more?’ They convinced me to cover more.”

In the mosque she was dressed in an Islamic way, but when she was out with family or friends she continued wearing more liberal-style clothes. “In the mosque they found out. They told me that I was ‘cheating God’.

“Of course that is not what I wanted, but I started to notice that they were also ‘cheating’ God.

“I saw them doing so many bad things–I overheard one of the leaders talking on the phone and discovered that she was a liar.” Disappointed, Maizah made the radical decision to leave the mosque and live a non-religious life.

‘The Way, the Truth and the Life’

Years later, at the beginning of 2011, Maizah had a profound spiritual experience, one she couldn’t explain away.

While one day crying in bed, “I felt someone touch my feet,” she said.

“The room had been dark, but all of a sudden there was a man shining like light. He didn’t look unreal, but I felt I couldn’t touch him. He kept standing next to me. I felt happiness in my heart just because of his presence. ‘I am the Way, the Truth and the Life,’ he said. Then he was gone.”

This was only two weeks before the civil war started in Libya. When the bombs started falling close to their home, the family decided to flee to Egypt.

‘A candle for Libya’

While in Egypt, Maizah came into contact with a Christian neighbour. The woman invited her over. Maizah’s relatives warned her against it because of the woman’s religion. 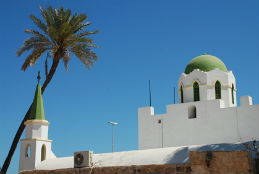 Libyans are not allowed to practice any religion other than Islam.World Watch Monitor

“That made me really want to know more. This woman was really honest with me. I asked her to tell me about Jesus. Her words spoke directly to my heart. I believed her, I felt it was true. I asked her to show me a Bible–it was the first time I saw one. I was scared of it.”

Maizah began to visit her Christian neighbour daily. “One day I told her about the man I saw in my bedroom. She told me it was Jesus, and she showed me a Bible verse in which He said–I am the Way, the Truth, and the Life.”

As time went by, Maizah felt she wanted to profess her new faith in Jesus. “The neighbour blessed me and said, ‘You will be a candle for Libya, shine for the people of Libya.'”

During her next visit to Egypt she was baptized. With help from her Egyptian friend, she got in touch with an Egyptian Christian family in Libya.

Even before the recent sway of Islamist insurgency in the country, attending a church in Libya has always been impossible for Libyans. The official churches are only allowed for foreign Christians. “We met for two years in secret,” remembered Maizah.

In 2013, her supportive Christian ‘family’ was arrested. A priest brought her into contact with another Christian. Maizah was warned: “The police were searching for you when they arrested your friends; they found notes with your name.” She fled to Egypt again.

Maizah’s birth family did everything to find her. She ended up in Turkey–the plan was that she would go to Europe.

“One day I called my mother on the phone. My sister answered. She said my mother was not well, that she was paralysed. I went home because I wanted to be with her.

“At the airport my family was waiting for me as if nothing happened. When I entered my home, my mother was standing there. I didn’t believe what I saw. I felt betrayed.”

Her brother said there were some people who wanted to talk with her. “I shouldn’t be afraid. He would stay with me. The living room was filled with men in white robes and long beards. They started to ask questions.”

When I entered my home, I didn’t believe what I saw

“They continued to hit me more and more, but then, somehow, I became aware that I was being protected, I didn’t feel the pain anymore. They kept on hitting and hitting me. I am still bearing the consequences of that day.”

At last, their leader spoke to Maizah alone: “Your name is on a list of people who should be killed. I can make you an offer–I can marry you. I have three wives, you can be the fourth. If you do this we forget about all of this.”

Shocked by the offer, Maizah said she agreed, in order to gain time. She said she needed to see a doctor before she could marry him. He agreed to this but didn’t want her to go to a Libyan hospital. She was taken to neighbouring Tunisia. “They constantly kept an eye on me. There was no chance to run.”

She had memorized the phone number of a pastor in that country. With the help of a doctor she managed to escape. She found refuge in a safe house.

Her outraged family started a search for her, but the safe house proved to be safe indeed.

Maizah – not her real name – finally made it to a Western country. Even there, she is still afraid of people coming after her.