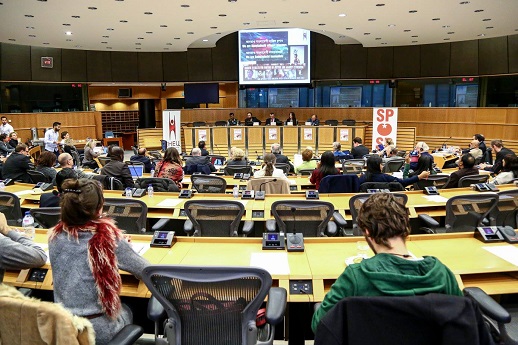 The European Parliament *Intergroup on Freedom of Religion or Belief and Religious Tolerance (FoRB & RT) launched yesterday (30 June) its third annual report on the state of freedom of religion or belief in the world for 2015.

“This is a document to change the reality through the European Union institutions,” explained its co-president, Peter Van Dalen, a Member of the European Parliament (MEP); it gives recommendations for the European External Action Service (EEAS), the Council and the European Commission. Van Dalen, however, encouraged everyone to look beyond those pages because “people are suffering”.

More to be done in the other EU institutions

The intergroup co-presidents welcomed the fact that the European Parliament is increasingly aware of this human right being violated throughout the world. They are nonetheless “not content” with the other institutions. “The [FORB] guidelines were embraced by us, but the [European] Delegations [i.e. EU “embassies” in the countries] do not even know them,” complained fellow co-president MEP Denis de Jong.

These guidelines were written by the EEAS as a tool for the EU officials and member states. A piece of research mentioned in the report from Professor François Foret (Université Libre de Bruxelles) shows that there are very low levels of awareness of the EU Guidelines at the Delegation level.

“Human rights should not be a hobby, they should be a core task for a diplomat [who should] engage with civil society and religious leaders,” continued de Jong, who asked for both training and more political will. “We should not allow that human rights ‘go down’ because the EU has other priorities”.

From the human rights unit of the EEAS, Nicole Reckinger said they will “take these comments seriously”, as they launch the process for reviewing the guidelines.

The internal-external coherence of EU policies

The newly appointed EU Special Envoy for freedom of religion or belief outside the European Union, the former education commissioner Ján Figeľ, also attended the event to present his mandate, which will be “external-oriented via areas of international cooperation and development”.

His priority region is the Middle East, but also South-East Asia and Northern and Central Africa. He will be under the supervision of the development commissioner, Neven Mimica, and will report back to the “Article 17 interlocutors” – that is, the churches and religious communities, and the philosophical and non-confessional organisations that meet regularly for dialogue with the European Commission.

Mr. Figel’ spoke about the importance of the coherence of the policies in the European Union: “We should do at home what we want to see outside,” he said.

The Intergroup report also highlights that the EU’s ability to persuade “third countries” (those outside the EU) will depend on “our own ability to consistently uphold these domestically”. The Intergroup’s official remit, however, only includes EU’s external relations.

The EU Special Envoy congratulated both the European Parliament as “the institution to raise awareness” and the NGOs attending the event as a “global force”.

The UN Special Rapporteur on Freedom of Religion or Belief, Heiner Bielefeldt, whose mandate is soon to finish, also encouraged civil society. “All meaningful changes in a country come from the society,” he said, calling for a strategy of “winning the hearts of the majorities” to protect the minorities.

Professor Bielefeldt warned against the “danger of resignation and of becoming cynical, especially when it comes to religion”. He explained his experiences when visiting Sierra Leone, where every religious community is involved in the Truth and Reconciliation Commission. “There are people living together without conflict, we should not close our hearts, minds or borders,” he added.

Below, World Watch Monitor highlights the report’s primary institutional and country-specific recommendations for the EU

– To the European External Action Service:

– To the European Commission:

The countries have been selected on the basis of: human rights violations by the governments or the lack of positive action by the governments to protect religious communities from persecution; and according to the leverage the EU can have.

There are 53 countries selected where FoRB is seriously under threat. The data was gathered through civil society organisations, and the Intergroup selected the focal countries (above).

*The Intergroup of the European Parliament on Freedom of Religion or Belief seeks more political will in the promotion of religious freedom.