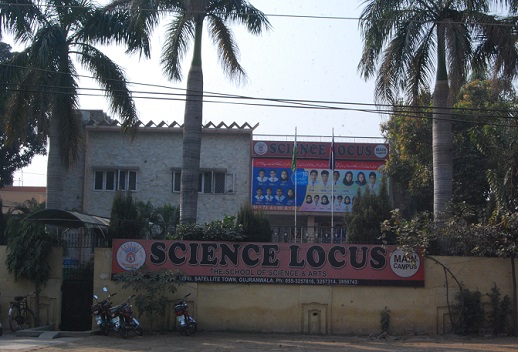 The Science Locus School of Science & Arts in Gujranwala, Pakistan.www.sciencelocusschool.edu.pk

An anti-terrorism court in Pakistan has sentenced a Christian man to death for committing blasphemy against the prophet of Islam.

Anjum Sandhu, 60, had initially sought police protection in May 2015, after alleging he was the victim of blackmail and extortion, but he was instead charged with blasphemy by the police, after the men he had accused levelled charges against him.

Sandhu, who has an Honours degree in Chemistry and a Masters in English Literature, is one of the three directors of eight branches of the Science Locus School in Gujranwala.

“Naz had previously worked at the school, but was dismissed for leaking examination papers, according to one of Sandhu’s relatives,” human rights activist Napoleon Qayyum told World Watch Monitor.

The police report, dated 15 May, 2015, states that after Sandhu identified the two, they were arrested and the police found that they had at least 20,000 rupees between them, which the police took from them.

But the two men then told the police that Sandhu, during a discussion at his school, had “used blasphemous words” and that they had a recording of him doing so.

However, a close relative of Sandhu’s, who did not wish to be identified, told Qayyum that in 20 years of running schools, Sandhu had never shown any “inclination towards discussing religion”.

The relative added that, “since the passing of this judgment, we have locked our houses and moved to an undisclosed location for fear of our lives”.

In Pakistan, dozens of people have been killed over a suspicion they committed blasphemy. Several Christian settlements have also been attacked, looted and set on fire on the pretext of blasphemy.

Accusation of ‘blasphemy’ on audio recording

“The blackmailing in this case involved an audio recording of a voice that sounded like Sandhu’s,” said Qayyum. “Naz, with the help of his friend, Ali, produced an audio recording with a similar voice to Sandhu’s and threatened him with dire consequences if he did not give them the money they demanded. When they once again demanded money, Sandhu consulted with his friends and lodged a complaint with the police. The police, rather than registering a blackmail case, demanded further money from Sandhu, knowing he was running the chain of schools as a successful business.”

The procedure for filing a First Information Report in Pakistan, as stipulated under the Criminal Procedure Code, is that “information relating to the commission of a cognisable offence, if given orally to any officer in charge of a police station, shall be recorded in writing by him or under his direction.”

“However, in this instance, the policeman, rather than recording Sandhu’s statement, assumed the role of a complainant himself,” Qayyum said. “Sandhu took the matter to the police because he was confident that he was innocent and that the police would be able to permanently deal with the culprits, but he never knew that the police themselves would become another bigger problem.”

Sandhu’s legal representative, Arif Goraya, told World Watch Monitor that the case was tried in an anti-terrorism court because “extortion while putting a person in fear of death or grievous hurt is treated as a terrorist act”.

“Sub-inspector Shaukat Hayyat investigated the case under the same head of the police station who had lodged this case,” he added. “Also, all the witnesses were from the police and there was no private witness; the latter carry far more weight in the eye of law. Also, the police never investigated the school students to ask if Sandhu ever used such words while addressing them. The judge believes that the Forensic Science Laboratory report connects the commission of the crime with Sandhu.

However, we say the report clearly expresses the inability of the laboratory to give opinion on voice recognition and matching.”

A list by Express Tribune, a Pakistan newspaper, of the most prominent people killed in Pakistan shows that a large number of them are killed over the issue of blasphemy.

The late governor of Punjab, Salmaan Taseer, was killed for supporting a Christian woman, Aasiya Noreen (known as “Asia Bibi”), who is waiting for the final decision from the highest court sometime this year on her death penalty. However, the list does not include Minorities Affairs Minister Shahbaz Bhatti, who died in 2011 for supporting Noreen and for seeking reform in the blasphemy laws.