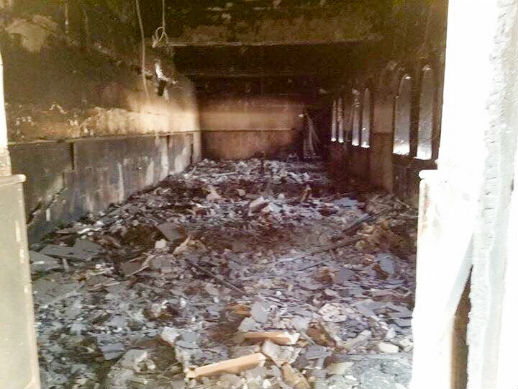 As prayers were offered in Syriac in front of the altar of the trashed church of Mart Shmoni in the recently freed town of Bartella, more homes where Christians used to live in Iraq’s north-eastern Nineveh Plain were being claimed back from the Islamic State (IS).

Qaraqosh, Iraq’s largest Christian town, has been regained by Iraqi forces, sources close to the area, have told World Watch Monitor. Also known by its Syriac name, Baghdeda was home to 50,000-60,000 people (95% Christian) before IS invaded it in 2014.

The troops now control the city centre and St. Mary’s Al-Tahira Syriac Catholic Church, the biggest church in the town.

— Video (2’30” long) showing church bells in Bartella rang for first time since Aug. 2014 and, midway through, priests and soldiers praying in a desecrated church in Qaraqosh —

Karamles, another town of significant Christian presence halfway between Bartella and Baghdeda, east of Mosul, may soon be fully in Iraqi hands.

We are warned IS possibly put mines in our homes.

Meanwhile, Bashiqa, another Nineveh town whose name testifies to its Assyrian roots, remains under siege, while Kurdish Peshmerga forces have regained more of the surrounding area.

Fighting continues for other towns where Christians were once a majority, including Telkeif, as anti-IS forces continue their push for Iraq’s second-largest city of Mosul, 10km away.

Telkeif was almost entirely a Christian town before it was Arabised and the majority of its ancient Chaldeans migrated to the Detroit area, in the US – a situation replicated in varying degrees across areas and towns in Iraq and the wider Middle East.

But despite images of liberating Iraqi militias ringing bells or cleaning statues of the Virgin on behalf of Nineveh’s displaced Christians, the Plain’s natives are not making a comeback just yet.

The graffiti reads, ‘No god but Allah [the Islamic proclamation of faith] is above [greater than] the cross’, though, ironically, it can also be read as ‘He who’s on the cross is God and no other’.World Watch Monitor

Long before the hot summer of 2014, when IS strove to wipe out every remaining Christian vestige from those ancient lands, Iraqi Christians have seen the country they called home turning increasingly more hostile towards them.

Iraq’s Christian presence has been rapidly declining in recent decades. In the early 1990s, one and a half million Christians reportedly lived in the country. Today, at most 250,000 are thought to still be living there, half of them internally displaced.

A report presented in October by Christian charity Open Doors UK says radical groups have been working for the religious cleansing of Iraq, with the aim of making the country “purely Islamic”.

Iraq’s Parliament, while apparently thrilled that the Nineveh Plain is being “liberated” from the “extremist” IS, has recently voted for a blanket ban on the sale, import and production of alcohol. In a country that at least officially recognises among its citizens indigenous groups like Christians, Yazidis, Shabaks and others, the availability of alcohol was found to be unconstitutional, as it is “un-Islamic”.

Now that the displaced may be considering their first moves back to their lost properties, Henriette Kats, analyst at the World Watch Research unit of Open Doors International, cautions against false optimism.

“Of course it is to be hoped that the citizens of Mosul and of the neighbouring towns will be able to return to their homes when the IS militants are defeated,” she said. “[But], although many Christians are looking forward to returning, many others are distrustful and say that they do not believe they can ever live in Iraq in safety again.”

NGOs fear that this military offensive will lead to new streams of refugees, which in itself could cause demographic changes – further alienating the Christians from their ancestral lands.