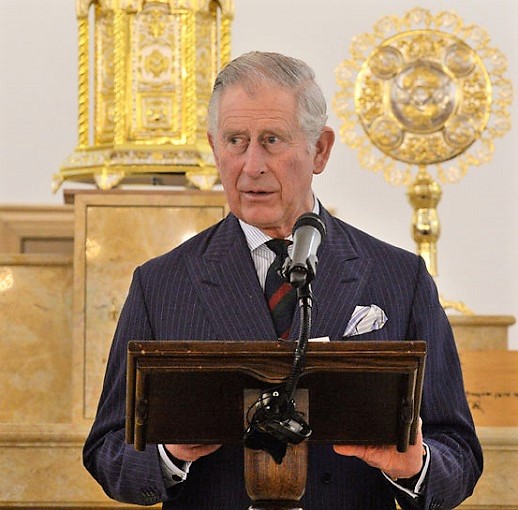 Iraqi church leaders in Britain have welcomed a radio message by Prince Charles, the future King of England highlighting the persecution of religious minorities, but said that it must be followed by steps by Western governments to protect them. Prince Charles, whose pre-recorded message on UK BBC Radio 4’s ‘Thought for The Day’ slot was broadcast this morning (22 Dec), said that attacks on many minority faiths around the world were increasing, “and in some countries even more insidious forms of extremism have recently surfaced, which aim to eliminate all types of religious diversity.” He said a Jesuit in Syria recently told him Christianity could disappear from Iraq, where Christians and other minorities have been ruthlessly targeted by Sunni and Shia militias for more than a decade, within five years.

He pointed out that religious persecution is a factor behind a rise in the number of displaced people and refugees, which the UN says rose by 5.8 million to 65.3 million last year, and noted that some refugees experience harassment in the country to which they flee on account of “increasingly aggressive” populist groups.

“We owe it to those who suffered and died so horribly not to repeat the horrors of the past,” he said.

The prince said that adherents of all faiths have a duty to respect religious freedom and accept other people’s “right to live out their peaceful response to the love of God”. He referred not only to Mary, Joseph and Jesus seeking refuge in Egypt from Herod’s slaughter of all boys under 2 years old, but also to Mohammed’s migration from Mecca to Medina to seek “freedom for himself and his followers to worship”.

He mentioned the recent consecration service of the Syriac Orthodox Cathedral in west London, for which three bishops from Iraq and Syria had been denied visas by the British Home Office, as an inspirational example.  “Here were a people persecuted for their religion in their own country, but finding refuge in another land and freedom to practise their faith according to their conscience,” he said.

Iraqi church leaders in Britain welcomed his message. Syriac Orthodox Archbishop Toma Dawod said: “His Royal Highness the Prince put his fingeron our wound. He is supporting the victim; we’re victims of terrorism.” Arguing that Islamist extremism poses a threat to Europe and Iraqi Christians alike, he added: “The British Government should listen to His Royal Highness, because the terrorists are over all the world. They are shaking our house. The British Government should support the victims and stop terrorism.”

Fr Nadheer Dako, head of the Chaldean (Church) Mission in the UK, said he hoped the Prince’s message would “correct” politicians’ understanding of the threat facing Middle Eastern minorities and force them to see the threat posed by extremist Islam in broader terms. “They must wake up,” he said: “If the Syrian Government wins the war in Aleppo and if the Iraqi Government wins in Mosul, it is not enough. The war is not against Islamic State but against the ideology.”

Mgr Nizar Semaan, of the Syriac Catholic Church, welcomed the Prince’s “message of solidarity” but said it was not just needed at Christmas. He agreed that Christianity in Iraq could be extinguished within five years “if we don’t have the support of the international community … no one recognises that Christians are the true victims of the war [in Iraq and Syria]; it’s not their war.” He said Christians who want to stay in the region need assurances of reconstruction and security, and those who wish to emigrate should be offered visas. “I don’t see why the international community, especially Britain, is not taking care of Iraqi refugees.” Two and a half years after Islamic State forced more than 100,000 Christians to flee northern Iraq, he said many are still in camps in Kurdistan. He added that Britain should use its influence in the Gulf to forces its allies there – some of whom funded militias in both countries – to help fund reconstruction.

In London recently I met a Jesuit priest from Syria. He gave me a graphic account of what life is like for those Christians he was forced to leave behind.  He told me of mass kidnappings in parts of Syria and Iraq and how he feared that Christians will be driven en masse out of lands described in the Bible.  He thought it quite possible there will be no Christians in Iraq within five years.  Clearly, for such people, religious freedom is a daily, stark choice between life and death.

The scale of religious persecution around the world is not widely appreciated. Nor is it limited to Christians in the troubled regions of the Middle East. A recent report suggests that attacks are increasing on Yazidis, Jews, Ahmadis, Baha’is and many other minority faiths.  And in some countries even more insidious forms of extremism have recently surfaced, which aim to eliminate all types of religious diversity.

We are also struggling to capture the immensity of the ripple effect of such persecution. According to the United Nations, 5.8 million more people abandoned their homes in 2015 than the year before, bringing the annual total to a staggering 65.3 million. That is almost equivalent to the entire population of the United Kingdom.

And the suffering doesn’t end when they arrive seeking refuge in a foreign land. We are now seeing the rise of many populist groups across the world that are increasingly aggressive towards those who adhere to a minority faith.

All of this has deeply disturbing echoes of the dark days of the 1930s.  I was born in 1948 – just after the end of World War II in which my parents’ generation had fought, and died, in a battle against intolerance, monstrous extremism and an inhuman attempt to exterminate the Jewish population of Europe.  That, nearly seventy years later, we should still be seeing such evil persecution is, to me, beyond all belief. We owe it to those who suffered and died so horribly not to repeat the horrors of the past.

Normally, at Christmas, we think of the birth of our Lord Jesus Christ. I wonder, though, if this year we might remember how the story of the Nativity unfolds – with the fleeing of the Holy Family to escape violent persecution.  And we might also remember that when the Prophet Mohammed migrated from Mecca to Medina, he did so because he, too, was seeking the freedom for himself and his followers to worship.

Whichever religious path we follow, the destination is the same – to value and respect the other person, accepting their right to live out their peaceful response to the love of God.

That’s what I saw when attending the consecration of the Syriac Orthodox Cathedral in London recently. Here were a people persecuted for their religion in their own country, but finding refuge in another land and freedom to practise their faith according to their conscience.

It is an example to inspire us all this Christmastime.
(Transcript courtesy of The Prince of Wales)