The north-east Indian state of Jharkhand has cleared the draft of an “anti-conversion bill” that could mean four-year prison sentences and 100,000 rupee fines (US$1,500) for those found to have forced another person to change religions, reports The New Indian Express. If what has been dubbed the “Religious Freedom Bill […] Crosses continue to be desecrated in the Indian state of Goa, despite the police claiming to have captured the ‘culprit’, a 50-year-old Catholic who, from what police say, appears to be mentally ill. Francis Pereira was arrested on 14 July, but the desecrations have continued, most recently on 27 July […] The son of a church leader shot dead in north-western India on Saturday (15 July) has revealed that his father had received threats that if he continued to preach, he would be killed. Alisha Masih, 22, who is also training to be a pastor, said his father, Sultan, who was […] 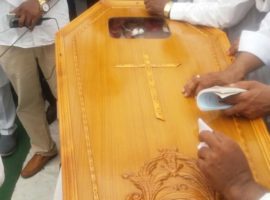 The Christian community in Ludhiana, the largest city in India’s north-western state of Punjab, is in shock after a pastor was shot dead outside his Pentecostal church on Saturday evening (15 July). Sultan Masih, 47, who also ran a school for the poor, was gunned down by two people on […] Today (17 July) Indian lawmakers are expected to elect Bihar Governor Ram Nath Kovind as the nation’s next president in a move that will strengthen the position of Prime Minister Narendra Modi and his Hindu nationalist party. According to Reuters the victory of the candidate put forward by Modi’s ruling […] Christian leaders in India have voiced concern that a priest accused of abusing a boy may have been framed to undermine the reputation of the local Christian community. Police in the central state of Madhya Pradesh arrested Fr Leo D’Souza, 56, on 10 July after a complaint from the parents […] Thousands of people, including church groups and representatives of civil society, have gathered in cities across India over the past ten days to protest against mounting religious intolerance and to express solidarity with the victims of the violence, under the banner “Not in My Name”. The protests in Kolkata, Hyderabad, […] The leaders of India’s Christian minority – 2.3 per cent of India’s 1.3 billion population – have distanced themselves from rumours of increasingly close ties with the ruling Hindu nationalist BJP. The latest rumours began following a meeting between senior Catholic Church leaders and the BJP’s national president, Amit Shah, […] Christians in the western Indian state of Gujarat have demanded the removal from schools of a textbook that describes Jesus as a demon, reports Asia News The description in ‘Teacher-disciple relationships in Indian culture’, a book for ninth-grade pupils, was discovered by Subramaniam Iyer, a lawyer. Translated from Hindi, the contentious […] A marked rise in vigilante incidents against couples in inter-faith relationships is a cause for concern in Uttar Pradesh, the northern Indian state where the ruling Hindu nationalist BJP recently enjoyed massive electoral success, reports the Woolf Institute, a UK-based interfaith research unit. It says incidents like the lynching on 2 May […]