Six Christians were badly injured and a house torched in an attack by Hindu extremists in the eastern Indian state of Odisha, following the death and burial of a Christian baby. The incident occurred on 27 February in Tangaguda, a town in Malkangiri District, where three Christian families live alongside […] After a year in which hate crimes against Indian Christians happened at a rate of almost one verified incident per day, the state which registered the most incidents in 2017 (over 50) – Tamil Nadu – continues to see outbreaks of violence. In the first two months of 2018, the […] The Evangelical Fellowship of India (EFI) has described 2017 as “one of the most traumatic” years for Indian Christians in a decade after it recorded 351 verified incidences of hate crimes against Christians during the year. The Religious Liberty Commission of the EFI, which brings together Christians from more than […] An acknowledgement by India’s BJP-led government that there has been a rise in religion-based hate crime has coincided with a warning from the Catholic Bishops’ Conference of India (CBCI) about the dangers to the country of a Hindu-nationalist agenda. Statistics revealed in India’s parliament on 6 February confirmed a long-standing […] 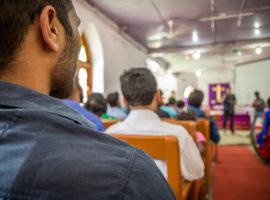 The body of Rev. Gideon Periyaswamy, 43-year-old pastor of the church of Maknayeem in Adayachery village, in India’s southern Tamil Nadu state, was found hanging from the roof of his house on 20 January. Church congregation members who discovered his body described his knees bent to the floor and his […] A Catholic school in the central Indian state of Madhya Pradesh has received threats from Hindu nationalists, who claim children at the school were punished for singing patriotic songs – the third school to come under pressure this month. The nationalists claimed around 30 students at the St. Joseph Convent […] Two of seven Indian Christians who have spent nearly a decade in prison – convicted of murdering a Hindu leader whose death sparked the worst case of anti-Christian violence in India’s history – were granted temporary parole over the Christmas period to spend time with their families. Evidence seems to be […] A large group of Hindu nationalists clashed with police on 4 January outside a Catholic college in Vidisha, in the central Indian state of Madhya Pradesh, after they tried to force the school to carry out a Hindu religious ritual. More than 900 members of the Akhil Bharatiya Vidyarthi Parishad, […] How will Christians under pressure for their faith celebrate Christmas? In the fifth of our series we hear from India. “Where is the joy? There is so much of fear now,” said AC Michael, a prominent Christian leader, when asked about the mood among Christians as they prepare for Christmas […]