Thousands of Nigerians who fled Boko Haram’s insurgency, and sought refuge in neighbouring Cameroon, have been forced back home, the UN said on 29 June, as Reuters reports. According to the UN refugee agency (UNHCR), some 887 Nigerians, most of them children, were repatriated against their will on 27 June alone. The . . . Read More
June 27, 2017 Addis Ababa, African Union, Benin, Boko Haram, Borno, Cameroon, Chad, Lake Chad, Maiduguri, Muhammadu Buhari, Niger, Nigeria As the 29th African Union (AU) Summit begins today (27 June), one of the major talking points will be the “now-major conflict zone” of the Lake Chad Basin, writes Omar S Mahmood, analyst at The Institute for Security Studies. The UN has described the situation in north-eastern Nigeria – one . . . Read More
May 16, 2017 Nigeria Boko Haram, Borno, Maiduguri A 14-year-old girl arrested on suspicion of being on a suicide mission in northern Nigeria says she was chosen because she refused to marry Boko Haram fighters. One of three suspects arrested at a military facility, the girl said that a week after she had refused her third proposal she . . . Read More
May 15, 2017 Nigeria Abuja, Boko Haram, Borno, Chibok girls, Muhammadu Buhari 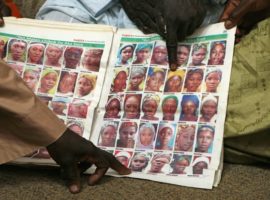 Boko Haram released a video on Friday (12 May) claiming to show Chibok schoolgirls who refused to be rescued as part of last week’s swap deal that saw 82 girls freed by the Nigerian government. In the three-minute video, a girl dressed in a veil and holding a gun says . . . Read More
May 9, 2017 Nigeria Borno, Chibok girls, Maiduguri, Yola Despite the good news of 82 freed ‘Chibok girls’, 14 million are in need of aid in north-east Nigeria, the centre of the Boko Haram insurgency. Of the 14 million, more than half are “severely food insecure”. The UN describes the unfolding disaster in the region as the “greatest crisis on . . . Read More
April 28, 2017 Nigeria Boko Haram, Borno, Chibok girls, Damasak, Kidnapping, Muhammadu Buhari, Nigeria, Refugees, Women As thousands of refugees return home to northern Nigeria, they are discovering with dismay the scale of devastation left by Boko Haram. In Damasak (Borno State), a city once occupied by the Islamist extremists, hundreds of children are missing. Most of them were seized by Boko Haram in autumn 2014. . . . Read More
April 20, 2017 Nigeria Boko Haram, Borno, Islamic extremism A German pastor whose charity supports widows and orphans in north-eastern Nigeria has spoken of the terrible suffering endured there by victims of Boko Haram. Renate Ellmenreich used to teach literacy classes in the country, but returned home in 1999 after her husband died. However, speaking on the BBC World Service’s . . . Read More
March 27, 2017 Nigeria Adamawa, Boko Haram, Borno, Gwoza, IDPs, Yobe, Yola The UN has described the unfolding disaster in north-eastern Nigeria as the “greatest crisis on the continent” – the full extent of which has only been revealed as extremist militant group Boko Haram is pushed back. The UN estimated in December that 75,000 children are at risk of dying of . . . Read More
February 28, 2017 Boko Haram, Borno, Lake Chad, Nigeria, Norway, Somalia, UN, Yemen
Only a third of the $1.5bn in emergency funding sought by the UN this year to prevent a famine in parts of northern Nigeria and neighbouring areas of the Lake Chad region has been raised at a summit in Oslo. Aid agencies must get food to almost 3 million by . . . Read More
February 22, 2017 Nigeria Borno, Chibok girls, Education, Kano, Katsina, Muhammadu Buhari, Nigeria, Rape, Terrorism, Women
One of Nigeria’s most prominent Muslim leaders has suggested that polygamy among the poor should be banned, saying that having masses of uneducated, poor children leads to terrorism. Muhammad Sanusi, the Emir of the northern state of Kano, who has four wives, said that polygamy itself is not wrong, but . . . Read More