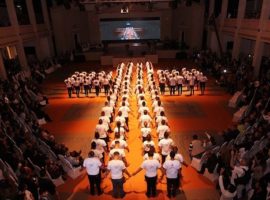 The event opened with around 100 young people forming the shape of a cross.Babylon Ministries   Thousands of displaced Iraqi Christians celebrated a “Return Festival” as the military advance against Islamic State (IS) in and around the city of Mosul raised their hopes of returning home after two years in . . . Read More
November 22, 2016 Iraq Assyrians, Baghdad, Erbil, IDPs, Islamic State, Jordan, Mosul, Nineveh Plains, Peshmerga, Qaraqosh, Refugees, Tel Kaif 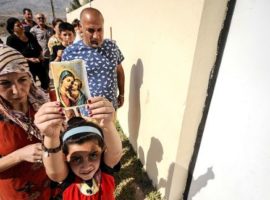 A young girl in a camp in Levo, northern Iraq, holds up a picture of the Virgin Mary and Jesus. One question that still angers many of the Christians who fled northern Iraq as jihadists from Islamic State (IS) advanced on their towns and villages is, “Where were the Kurdish . . . Read More
November 21, 2016 Iraq Erbil, IDPs, Iraq, Islamic State, Kurds
The military defeat of Islamic State (IS) will not be enough to encourage displaced Iraqi Christians back to the cities, towns and villages from which the jihadists chased them, according to a senior priest in the region. Archimandrite Emanuel Youkhana, a priest in the Assyrian Church of the East and . . . Read More
November 18, 2016 Nigeria Adamawa, Boko Haram, Borno, Cameroon, Chad, Gwoza, IDPs, Niger, UN, Yobe 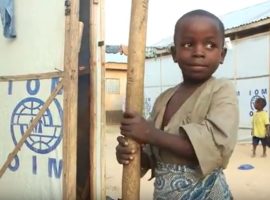 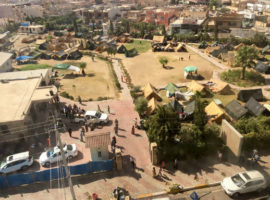 Tens of thousands of Christian families were chased from their homes in north-eastern Iraq when Islamic State jihadists invaded the Nineveh Plains in summer 2014. At first they expected to return within a few days. But the days became weeks, the weeks months, and the months years. World Watch Monitor traces . . . Read More
November 3, 2016 Nigeria Boko Haram, Borno, Church of Christ in Nigeria, IDPs, Maiduguri, Nigeria
A Church of Christ in Nigeria (COCIN) pastor was among seven persons killed in two assumed Boko Haram suicide bombings in Maiduguri on 29 Oct. No further details on the pastor were yet available, but BBC reports that a female suicide bomber blew herself up outside the Bakassi IDP camp, . . . Read More
October 7, 2016 Al-Qaeda, Ankawa, Arabs, Assyrians, Erbil, IDPs, Iraq, Islamic State, Mosul, Qatar, Recep Tayyip Erdogan, Saudi Arabia, Sunni, Turkey
Turkish President Recep Tayyip Erdoğan has declared that only Sunni Muslims should be allowed to live in the second largest Iraqi city of Mosul once it has been liberated from Islamic State control. Interviewed by Saudi journalist Jamal Khashoggi on the Saudi Arabia-based TV station Rotana Khalejia on 2 Oct., . . . Read More
September 22, 2016 Iraq Ankawa, Baghdad, Erbil, IDPs, Iraq, Islamic State, Karamles, Louis Raphael I Sako, Nineveh Plains
The ordination of Martin Baani, a Catholic priest who became one of the when he dedicated himself to the needs of thousands of people in displacement camps, has been celebrated as a revival of Christianity in the Middle East, reports . Louis Sako, Chaldean Catholic Archbishop of Baghdad, who performed . . . Read More
September 20, 2016 Lebanon IDPs, Islamic State, Lebanon, Migrants, Refugees, UN 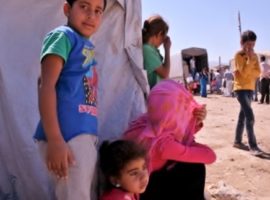 One in every 113 people on earth is a refugee, according to UN figures; yesterday at its General Assembly in the US, it adopted the New York Declaration aimed at reaching a more humane and coordinated approach to large movements of refugees and migrants. At the meeting, UN Secretary-General Ban . . . Read More
August 18, 2016 Iraq Alqosh, Assyrians, Chaldeans, IDPs, Iraq, Louis Raphael I Sako, Nineveh Plains
A Christian town some 50km north of the Islamic State’s Iraq stronghold of Mosul has celebrated its first Communion Mass, completing the initiation of a hundred boys and girls in the faith. In what was described as a “historic moment”, Chaldean Catholic Patriarch Louis Raphael Sako presided over the ceremony . . . Read More