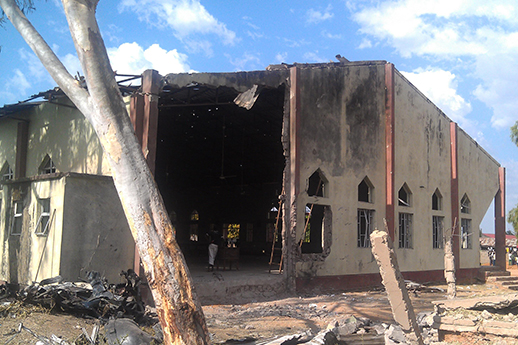 Nigeria’s President Goodluck Jonathan was reported last week to have said that statistics show that more Muslims than Christians have been killed by Boko Haram.

Speaking at his Presidential villa in the capital at the opening meeting of the Honorary International Investors’ Council, led by UK Baroness Lynda Chalker (a former Secretary of State for International Development), he is reported to have said: “Initially, people thought the insurgency is about religious issues, but the pattern of attacks shows clearly that it has nothing to do with religion. Just as there are threats to churches, so also there are threats to mosques.

“They attack everywhere, killing Muslims and Christians. Even more Muslims have died in the conflict than Christians have. So the groups, whether political or whatever interest have external influence, considering the issues of Al Qaeda.

“Basically, it goes beyond religious issues. They are terrorists that have decided to destabilise the country for some reasons, sometimes it could be Western influence, governance issues and so on. They are terror groups that are not representing any religion.”

The Christian Association of Nigeria (CAN) has refuted his assertion. Its spokesman Sunday Oibe responded: “Our attention has been drawn to a purported claim by President Goodluck Jonathan that the Boko Haram insurgents in the north have killed more Muslims than Christians and that it is not a religious issue.

“The purported statement by Mr. President is highly disappointing considering the fact that Christians and their churches and businesses have been the major targets of the Boko Haram terror group.

“We want to believe that the President was misquoted… If it is true that Mr. President actually made this assertion, then we are highly disappointed and sad at this veiled attempt to distort the facts as it concerns the activities of the Boko Haram sect.

“We say this because there has never been any bomb that has been exploded in any mosque or targeted at any mosque in the entire activities of the Boko Haram sect in the north. The Boko Haram members even said that when a Muslim is killed, it is by mistake”.

A new paper, produced for the World Watch List by a Nigerian researcher who prefers to remain anonymous for security reasons, argues that the situation in Nigeria is a classic example of what could be referred to as persecution eclipse.

This is a situation, writes the author, whereby persecution and civil conflict overlap to the extent that the former is in a real or imaginative sense overshadowed or rendered almost invisible by the latter.

The paper argues that persecution eclipse minimises, overlooks or denies the suffering of a victim of persecution; encourages a causal analysis that provides vicarious justifications for the perpetrators’ actions; shifts the focus of interrogation from religious freedom violations to conflict analysis; and embraces an instrumental view of conflict in which religion assumes an insignificant place in the analysis.

The concept of persecution eclipse is proposed to show how religious freedom itself can become a casualty in a situation where genuine persecution becomes lost in a murky debate.

The author distinguishes two broad categories of persecution that Christians in northern Nigeria experience: insidious persecution (typified by the daily experiences of harassment, exclusion and discrimination of many Christian minorities in the region) and elevated persecution, a more lethal form of persecution, based on outright violence.

“The majority of conflicts reported in international media as ‘clashes’ between Muslims and Christians in actual fact have been one-sided violence against Christians.”

The author claims that insidious persecution has been occurring for years, and that while elevated persecution used to be sporadic, it has become entrenched very visibly in recent years.

Civil unrest obscures religious persecution and can itself be a vehicle for persecution, the author claims, through its negative impact on the stability of society and the way it encourages Islamist groups to violently pursue their religious agenda.

“Inter-religious conflicts [relating to] the struggle over power and resources are endemic in Nigeria,” writes the author. “These conflicts have been used as vehicles to pursue the objectives of persecution and to widen its scope. In order to misinform the outside world, perpetrators have learned to invent narratives that conceal the nexus between persecution and conflict, and engage in propaganda using mainstream and social media.”

Another dimension of this misinformation, he argues, is that “the majority of the incidents of conflicts that have been reported in the international media as ‘clashes’ between Muslims and Christians in actual fact have been one-sided violence against Christians.”

This report makes many interesting observations, but it doesn’t investigate them in depth. However, the author has laid the groundwork for a more detailed investigation, on which others can build.