Majority-Buddhist Myanmar is made up of eight major and eight minor ethnic groups, each of which hoped for autonomy after Burmese independence 70 years ago, and some of the world’s longest-running civil wars continue here. Operation World, a Christian missionary organisation, calls Myanmar “a deeply fractured nation on a political and especially ethnic level”. The conflict zones along the country’s borders are where most of Myanmar’s Christians live, including the Kachin and Karen ethnic minorities, which have faced years of government oppression. Meanwhile, the rise in the number of Muslims has provoked the Patriotic Association of Myanmar, locally known as Ma Ba Tha and led by influential Buddhist monks. Ma Ba Tha is not merely anti-Muslim, it is Buddhist nationalist, so Christians are not beyond its focus. Myanmar was thrown into a crisis following a coup on 1 February 2021 which has left ethnic religious minorities even more vulnerable. Majority-Buddhist Myanmar is made up of eight major and eight minor ethnic groups, each of which hoped for autonomy after Burmese independence 70 years ago. On February 12th, 1947 Aung San Suu Kyi’s father, then national leader, signed the Panglong Agreement, promising all ethnic minorities a place in a new […] Four of the 41 Bible students forcibly recruited by an ethnic minority army in Myanmar’s northern Shan state in September have escaped, according to Catholic news site UCAN. Last month an initial group of 17 students escaped from a United Wa State Army (UWSA) base in the Wa hills near the […] Seventeen of the 41 Bible students forcibly recruited by an ethnic minority army in Myanmar’s northern Shan state in September have escaped, according to Catholic news site UCAN. The students arrived in groups of two or three at the Lahu Baptist Church in Kyaing Tong town, eastern Shan state, in the […] A military group in Myanmar has detained ethnic minority Wa and Lahu Christians and ordered them to pledge that they will not pray in churches but only in their homes, Catholic news agency UCAN reports. One hundred Wa Christians, who signed a statement giving a guarantee, have since been released, […] The discrimination a Christian can meet on a daily basis in Myanmar is explained by Tun from the Chin ethnic minority. He left his town in Chin state and moved his family to another area to pastor a small group of Christians in a predominantly Buddhist village. His name is […] Myanmar’s Peace Commission has held a meeting in China with the representatives of three ethnic armed groups fighting the Myanmar Armed Forces along the country’s northern border, AsiaNews reports. The  Ta’ang National Liberation Army, Arakan Army and Myanmar National Democratic Alliance Army are part of the Northern Alliance, which also […] 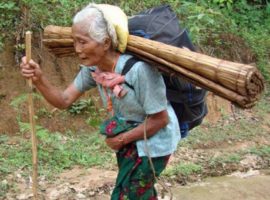 Myanmar has blocked humanitarian aid to tens of thousands of forcibly displaced people in the ongoing war in northern Kachin state – for over seven years – says humanitarian group Fortify Rights in a new report. “Consecutive governments and the military have wilfully obstructed local and international aid groups, denying […] The US government announced on Friday that it had imposed sanctions on Myanmar for “widespread human rights abuses” against Christians, Rohingya Muslims and other ethnic minorities, reports The New York Times. According to the Treasury Department the abuses against Rohingya Muslims in southwestern Rakhine state, forcing more than 700,000 to seek […]