Although Russia is a secular state with an atheist past, the regime favours the Russian Orthodox Church, which can mean problems for other denominations. Non-traditional Protestant churches are accused by the Russian Orthodox Church of stealing their members. Since 2011, several legal restrictions have shown a trend towards greater state control and more isolation from the West, which has affected denominations that are seen as “Western”. Meanwhile, in the Muslim-dominated Chechnya and Dagestan republics, converts to Christianity are considered traitors to their national identity. In July 2016, President Vladimir Putin signed into law what some commentators referred to as an “anti-missionary bill”. The Yarovaya Law was formally introduced as an “anti-terrorism” measure, allowing the government to monitor extremist groups. However, Russia’s Christians have also been affected, particularly missionaries, who need a permit, and “house churches”, which are now illegal, as religious activity is only allowed inside registered buildings. Maximum fines are $780 for individuals or $15,000 for organisations. In August 2016 American missionary Don Ossewaarde was fined $640 for holding a church service in his home. He took his case to Russia’s Supreme Court and then, in March 2017, to the European Court for Human Rights. (Photo: Fred Inklaar via Flickr; CC 2.0) Foreign students of Pentecostal churches in Russia’s Nizhny Novgorod region have become a particular target for the authorities under the so-called “anti-missionary” law introduced two years ago, Forum 18 reports. The vague definition of “missionary activity” in the law, officially titled the Yarovaya Law after one of its authors, has meant that law […] “This is a very dire time for human rights in Russia,” according to the Russia programme director for Human Rights Watch, Tanya Lokshina, speaking ahead of the start of the 2018 Football World Cup, which kicked off in Moscow earlier today. Since Vladimir Putin became Russia’s president again in 2012 […] Lawyers working for Christian and other minority religious organisations in Russia have welcomed a Constitutional Court ruling over the country’s so-called “anti-missionary law”, reports regional news agency Forum 18. The March ruling helps to partially clarify what is missionary activity. It stated that “giving information about religious events would constitute […] Seven people were killed in an attack on a church in Chechnya on Saturday (19 May) that was claimed by Islamic State, local sources told World Watch Monitor. The victims included two police officers who were guarding the church, all four militants and one churchgoer, World Watch Monitor was told. […] Legal requirements applied to the expression of freedom of religion in Russia impose a significant burden on religious communities not recognised by the state – in the shape of fines, legal costs and bureaucracy – reports regional news agency Forum 18. The requirements are “unclear” and applied “inconsistently”, Forum 18 […] 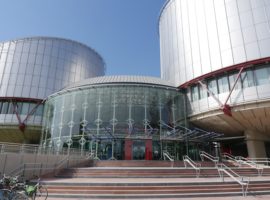 Religious freedom advocate ADF International is today (7 March) filing a third-party brief with the European Court of Human Rights, arguing “for the right to religious freedom to be properly respected in Russia”. (Such a brief is a statement by a third party, usually an NGO or academic, which has […] Three people have been arrested in connection with the gun attack at a Russian Orthodox Church in Kizlyar, Dagestan, last Sunday (18 February), in which five people died and five others were injured. One of those arrested, Magometrasul Gadjiev, 19, studied at the same Muslim spiritual seminary as the attacker, […] Authorities in one of the least stable parts of Russia have identified the suspected gunman who killed five women at a church yesterday (18 February) before being shot dead by security forces. The mayoral office in Kizlyar, in the restive and ethnically diverse region of Dagestan, named the assailant as […] Russia’s anti-extremism laws are being used to crack down on peaceful religious minorities such as Protestants, Jehovah’s Witnesses and Hare Krishnas, the top US religious-freedom watchdog says. A report commissioned by the US Commission on International Religious Freedom (USCIRF) found that “vague and problematic definitions of ‘extremism’ in Russian law […] The European Court of Human Rights (ECHR) has asked for clarification over how Russia applies its  religion law to foreign citizens, reports news agency Interfax. The case that triggered their interest was that of an Evangelical Christian of Indian descent, who was one of the first people to be deported […]