As the number of Christians from a Muslim background is growing, they face restrictions and difficulties with radical Islamic groups, local religious leaders, and families. There are fatwas implemented all over the country, especially in rural areas, and demands to introduce Sharia (Islamic law) to show the country belongs to the “House of Islam”. Local government officials create various obstacles for Christians, but the rise in attacks claimed by the Islamic State group has been countered by security forces. 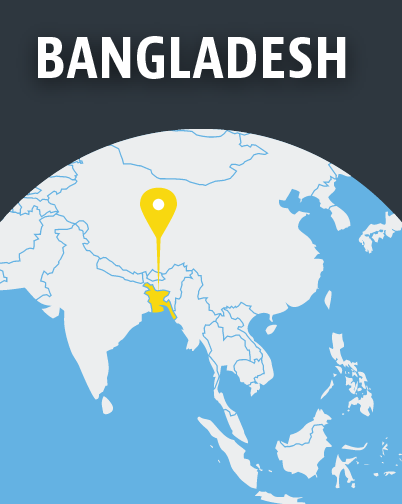 “Christians appear weak and can be easily persecuted.” That’s the reaction of the president of the Bangladesh Christian Association to reports of two Catholics being sexually assaulted in recent days – one a 15-year-old girl, the other a mother of three. The assaults are reported by Asia News to have […] Bangladesh’s prime minister has pledged that anyone who offends Islam or its prophet will be prosecuted. Sheikh Hasina said the religion of Bangladesh “is Islam. Anyone who pronounces offensive comments against it, or against the Prophet Muhammad, will be prosecuted according to the law,” as reported by Asia News. Her […] Christians and other minorities in Bangladesh face a “daunting election” at the end of the year, warns the Bangladeshi Bureau Chief of Catholic news agency UCAN. “Elections and violence go hand-in-hand in Bangladesh and minorities often face the brunt of this amid a tug-of-war between political parties jockeying for power,” […] Bangladesh is considering the introduction of a new law that would further limit freedom of expression and belief in the country, a senior Bangladeshi journalist warns. The Digital Security Act, a draft of which has been approved by the government, will include a section that “criminalizes online content regarded as defamatory […] The arrest of two members of a banned Bangladeshi militant group, who confessed to wanting to kill Christian converts, has put the spotlight on the changing tactics of Muslim extremist groups in the country. Security forces arrested two members of Jamaat-ul-Mujahideen Bangladesh (JMB) on 14 February in Dhaka, the capital, […] More than 200 Catholics have marched in the Bangladesh capital, Dhaka, in protest over last week’s attack on one of the country’s oldest churches, reports Asia News. Attackers broke into Canterbury St. Augustine church, also in Dhaka, early on 8 February, tied up and beat the parish priest and stole money […]

Portuguese Christians, initially merchants and later also missionaries, arrived in Bangladesh 500 years ago and started communities. Today Bangladeshi Christians form a tiny group in the Muslim-majority nation and face various challenges because of their faith. According to Fr. David Bipul Das, a Catholic priest in the diocese of Barisal, […] A Catholic priest who went missing in Bangladesh days ahead of a visit by Pope Francis has been found alive, but there is still confusion over the circumstances of his disappearance. Father Walter William Rozario, 41, is said by his family to have escaped from his captors and called his […] Pope Francis has arrived in Bangladesh, where a Catholic priest disappeared three days ago, highlighting the pressure Christians and other minority groups are under in the mainly Muslim country. Father Walter William Rozario, who is also the headmaster of a high school, went missing in northern Natore district on 27 […] Police in Bangladesh’s northern Natore district have charged 12 militants with the murder of a Catholic shopkeeper in June last year. The charges followed a reported confession by a militant leader in custody, who is said to have admitted that members of Jamaat-ul-Mujahideen Bangladesh, an organisation affiliated to the Islamic […]