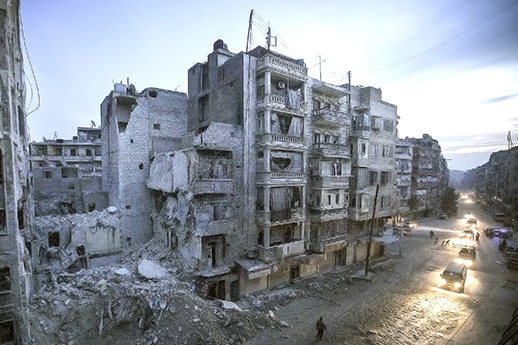 Syria has been torn apart by a conflict lasting more than two years.flickr.com/freedomhouse

Syrian Christians are the victims of disproportionate violence and abuse as sectarian violence continues to engulf Syria, says a new report.

Christian women are especially vulnerable to sexual abuse, while Christian men are facing pressure from both sides to join the battle, according to Vulnerability Assessment of Syria’s Christians, coordinated by the World Watch Research unit’s Dennis Petri, with analysis from political commentator Nicholas Heras.

The result, the report claims, is that Christians are scared to engage in public displays of worship, while proportionally more Christian refugees are leaving Syria than any other religious or ethnic group.

Vulnerability Assessment of Syria’s Christians acknowledges that many of the struggles facing Christians in Syria are shared by the entire population, but says Christians are “soft targets” and “particularly vulnerable” to some things, including hostility in refugee camps, targeting by Islamist groups and criminals, and confiscation of land.

Christians are “caught in the crossfire of the strife between government and opposition forces and suffer violence from both parties”, writes Petri.

Christians are not always targeted deliberately, he says, but this “does not mean they are not a vulnerable group… and implies they are in varying degrees liable to suffer specific threats”.

More than two years have passed since the beginning of the civil war between President Bashar al-Assad’s government forces and the Free Syrian Army and the fight is increasingly taking the shape of a “jihad” against the Syrian government, writes Heras, as opposition forces are ever more “Islamized”.

Meanwhile Syria’s Christians are called victims of “systematic militarization”, which Heras predicts will become a “significant trend” in the near future.

Vulnerability Assessment of Syria’s Christians predicts four possible outcomes to the conflict, the most likely being the eventual overthrow of the government by opposition forces “dominated by Islamists”.

In this event, the report predicts continued sectarian violence due to the failure by opposition forces to completely destroy government forces and al-Assad’s supporters.

The other potential outcomes predicted are: the al-Assad regime prevails but violence continues in the short-term; opposition forces take complete control of Syria and form an Islamic state – the “worst-case scenario for Syria’s Christians”; or the civil war continues but the sectarian element of the conflict is reduced.

Whatever the outcome, Heras predicts a bleak future for all Syrians, and this includes Christians.

“Christians face the prospect of never being able to return to their homes and businesses, or of returning to a civil order that is less pluralistic and accepting of minority rights than before the war,” he says.