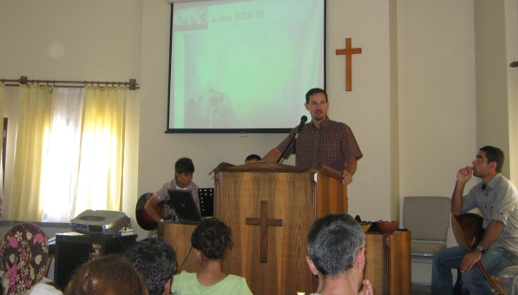 After 12 years serving a church in Turkey voluntarily and peacefully, Jerry Mattix suddenly is on the country’s blacklist.

Officially, the government has deemed Mattix a threat to national security. Yet the police have told him he is “welcome” to apply for a visa.

Such is the perplexing state of affairs in Turkey’s southeast province of Diyarbakir, where Mattix and several other once-welcome Christian foreigners have become personae non gratae.

In April and June, Turkey denied Mattix, a U.S. citizen, a religious-worker visa. When he and his family tried on June 7 to re-enter the country, they were turned away.

He and his family had lived in Diyarbakir for over a decade, helping the local church. Mattix also has authored several books, in Turkish, explaining Christianity.

“What exactly they cite as my crime that is so threatening to national security I do not know,” Mattix told World Watch Monitor from the United Kingdom, “but I can only guess that it has to do with the fact that I have been serving the local Turkish churches all these years.”

View Diyarbakır in a larger map

Diyarbakir is known for its diverse mix of Turks of Kurdish, Arab and Syrian ethnic background. It also is located near the epicenter of ongoing clashes between Turkish military and Kurdish rebels, and not far from Turkey’s border with Syria, over which thousands of Syrian refugees have fled, overwhelming local authorities. These issues have made the region politically sensitive for Turkey’s ruling AK Party, which is trying to marry democratic principles with modern Islam.

Mattix and his family are not the only ones who have discovered their welcome has worn out. In the past two years, at least six other foreign-born families have either been deported or denied renewals of their residency permits.

“Sadly, this is not just a personal vendetta on the part of the government,” Mattix said. “Several other Christian workers in our region and connected to our church have been forced to leave in the last year.”

Since May, when protests against the ruling government of Prime Minister Recep Tayyip Erdogan erupted in Istanbul’s Gezi Park, some foreign nationals have expressed apprehension about the government’s view of them. Turkish authorities arrested seven foreign nationals on June 5, on suspicion of helping to provoke the riots, which sparked demonstrations nationwide, Hurriyet Daily News reported.

For their part, churches in southeastern Turkey say they’ve been deprived of their right to obtain help and support from foreigners.

The 2010 charter granting association status to the Protestant church in Diyarbakir specified it could employ local or foreign clergy or religious workers on a paid or volunteer basis for the purpose of educating its members. Turkey’s constitution, furthermore, grants all citizens freedom to choose, study, and communicate their religion.

Ahmet Guvener, pastor of the Diyarbakir Protestant Church for the last 16 years, said losing Mattix has left them ill-equipped to do so.

“This is leaving us in a really difficult position,” he told World Watch Monitor, “because we don’t have a religious worker and in Turkey it is forbidden to train our own [Christian] theologians. We invite foreign Christian workers, but here we encounter serious residency problems and we are left at a loss as to what to do.”

The troubles for Mattix began in September 2012, when undercover police attended a Sunday-morning service at the church. Four months later, in January, Mattix was fined 679 Turkish lira (US $352) for “illegal work.” Diyarbakir Church was fined 6,795 lira ($3,530) for employing Mattix illegally.

“The police came and observed our service and in their internal police report said: ‘Jerry Ian Mattix preached for 30 minutes and then prayed.’ That was ‘work’ for them,” Guvener said.

A lawyer for the church is appealing the fines, claiming Mattix is a self-supporting volunteer who has never been paid by the church for his ministry involvement.

For the last 12 years Mattix and his family have resided in Turkey under a long-term residency visa, as do most foreigners who are not employed with a formal work permit. Renewal of the residency visa was refused in November 2012, prompting his church sponsors to seek a religious-worker visa for him.

There are very few known cases of foreigners living in Turkey under religious-worker visas, although the law in theory permits churches to hire foreigners.

“We want Jerry as a religious worker to serve here, and though we applied for the appropriate visas for him, the authorities refused him [in April and June],” Guvener said. “On top, they fined us [in January], which means the government had already made a decision.”

It wasn’t until Mattix tried to enter Turkey at Ataturk International Airport in June that he discovered from police that he had been officially blacklisted, on two counts. The first was his fine for “working,” which he had already paid. The second alleged Mattix was involved in activities that threaten national security.

“In other words, they had declared me an enemy of the state, on a par with terrorists,” he said.

Mattix said he also learned that the second count against him had been placed on March 29, prior to the government’s first denial of a religious-worker visa.

“For 12 years he never did anything but be a peaceful man,” pastor Guvener said. “But when he applied for the ‘religious worker’ status, the government had already decided he was a national threat to the point that they blacklisted him, with no chance of him returning to the country indefinitely.”

The church’s lawyer asked the government why Mattix had been blacklisted, denied a visa and denied entry to Turkey. In response, the police sent a letter that avoided those questions and invited the American to apply for an appropriate visa.

Mattix and Guvener said they believe the deportation of Christian foreigners could spread across the country.

“All in all it seems like a planned and systematic effort to root out foreign Christians who are ministering alongside local Turkish Christians, especially in the eastern provinces,” Mattix said.

“It is the easiest and most natural place to begin this purging,” he said, “because there are fewer foreigners in the eastern provinces and the region in general is rife with political tensions, which serve as ample justification for this type of cleansing.”

Guvener said he fears for the future of the local churches in the southeast.

“There is a discomfort with foreign Christians here, and slowly they will clean them out. In the end the churches in the east will become weak and scattered, because there are no mature Christian workers among us.”

There are an estimated 4,500 Protestant Christian Turks living in Turkey, concentrated mostly in Istanbul. The church in Diyarbakir claims 80 members who are converts to Christianity. It is located in a traditionally Christian district of Diyarbakir, on the same street as the Syrian Orthodox community’s Virgin Mary Church. Today about 2,000 Syriac Christians still reside in their traditional homelands in the southeast. More than 15,000 others have moved to Istanbul in recent decades. The city was once also home to a bustling Armenian community.