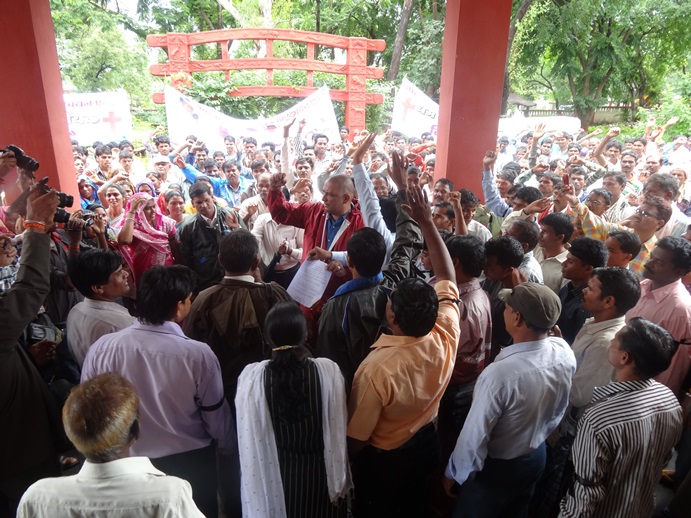 Protesters gather in Jhabua, a town in the west of Madhya Pradesh, on July 24.World Watch Monitor

Madhya Pradesh state in central India awaits the outcome of proposed amendments to its ‘anti-conversion law’, which would lengthen prison time and fines for anyone convicted of forcing someone to change their religion.

With state elections looming before this government ends its term in October, some observers claim the move is an attempt by the ruling Bharatiya Janata Party (BJP) to appease Hindu hardliners.

The Christian minority now awaits the verdict of the state Governor, Ramnaresh Yadav, who must sign the bill before it can become law.

The amendment was one of a number of topics considered during a two-week local assembly meeting beginning on July 8 and scheduled to finish on July 19.

However, local sources told World Watch Monitor that proceedings were halted on July 11, while the opposition prepared a no-confidence motion against the present BJP government.

The Governor has therefore delayed his response to the proposed amendment and called for another meeting of the local assembly.

The Madhya Pradesh Freedom of Religion Act, introduced in 1968, prohibits forcible conversion, but critics say the law has been abused by those who wish only to prevent others from changing their religion. As such, they have been widely labelled ‘anti-conversion laws’.

Dr. John Dayal, a member of the National Integration Council for the Government of India and Secretary General of the All India Christian Council, says that rather than promoting freedom of religion, laws such as the Madhya Pradesh Freedom of Religion Act of 1968 are in fact “violations of the religious freedom guaranteed by the constitution”.

“It is a deliberate attempt to polarise society and to keep Dalits and other marginalised groups in serfdom,” he says. “We are determined to challenge such black laws.”

As punishment, the 1968 Act recommends a fine of up to 5,000 rupees ($83) and imprisonment of up to one year. In the case of a conversion involving a child, a woman or member of a ‘scheduled caste or tribe’ (those recognised in India’s Constitution as ‘historically disadvantaged’ by background), prison term and fine can be doubled.

The proposed amendment recommends maximum punishment of three years’ imprisonment and a fine of 50,000 rupees ($830), or four years and 100,000 rupees ($1660) in the case of a child, woman or member of a scheduled caste or tribe.

The amendment also introduces the requirement for both the converter and would-be convert to obtain state permission at least 30 days prior to conversion.

For this purpose an application would need to be filed with the district magistrate, who may then ask the police to investigate.

Those failing to obtain prior permission – both convert and converter – could face one year’s imprisonment and a 1,000-rupee fine.

Protests
Christian leaders in Bhopal, the state capital, met Chief Minister Shivraj Singh Chouhan before the July 8 congress and petitioned him to reject the bill, while hundreds of Christians have attended protests across the state. 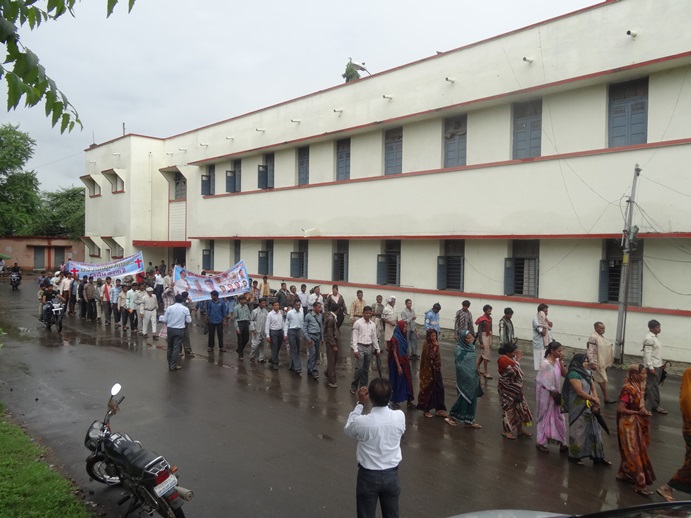 “For us this bill is very important. The poor community in Madhya Pradesh will face a situation like Gujarat [a state in the west of India, where the law is particularly severe] if this amendment is made.”

Iyengar said that meetings had been held in every district in Madhya Pradesh and petitions signed against the amendment. Non-religious groups such as the centrist Bahujan Samaj Party (Majority People’s Party) also attended the protests.

“Never were the Christian community so united as at this time,” she said.

Background
In 2006, a comparable amendment to the state’s ‘anti-conversion law’ was reported internationally as ‘passed’, but then former Governor Balram Jakhar twice refused to give his approval.

This was also the case for a proposed amendment to the respective law in the mountainous northern state of Himachal Pradesh, which was quashed last year after protests led by the Evangelical Fellowship of India and Act Now for Harmony and Democracy.

In the vast and diverse country, Christians often live freely. However, India ranks among the 50 countries where life as a Christian is most difficult, according to Open Doors International, a global ministry that serves Christians who are pressured because of their faith.

The country is No. 31 on Open Doors’ 2013 World Watch List, largely because of a streak of Hindu nationalism, or Hindutva, that envisions India as a purely Hindu state.

Earlier this week, World Watch Monitor reported a number of specific examples of attacks against India’s Christians in recent months.