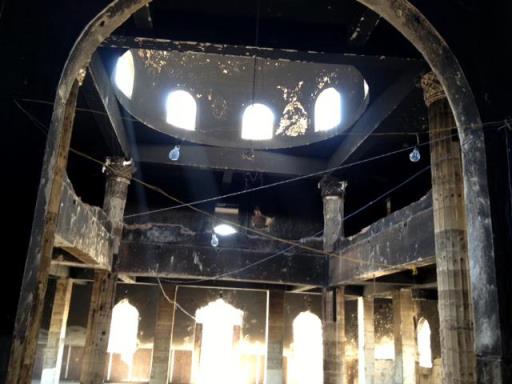 The charred remains of the Orthodox Church of the Virgin Mary in Delga.World Watch Monitor

A few days on from the Egyptian army’s re-establishment of state control over Delga in Minya province, the country’s Coptic Christians are beginning to reveal the extent of their sufferings at the hands of supporters of former President Mohamed Morsi.

Delga in Upper Egypt, a remote village about 150 miles south of Cairo, was one of the worst affected, as Morsi supporters vented their anger against Copts for their perceived part in the Muslim Brotherhood government’s overthrow.

Estimates say of the approximate 120,000 population, roughly a third are Christian. Since the Aug. 14 wave of anti-Christian violence that swept over Egypt, the Christians of Delga had complained they had been abandoned by police and government security forces.

Many of their churches and businesses burned, and their houses marked with red “X”s, Delga Christians either fled or hunkered down in their homes.

Father Abraam Abu El-Yameen, priest of the 1600-year-old monastery of St Mary and Abraam, which was torched, told World Watch Monitor that as many as 150 Christian families fled the village and that those who remain are scared.

“[Despite] the existence of the military in the village and the arrest of more than 100 Muslim militants, the Christians here are so afraid because they have received many threats from Muslims,” he said.

“Despite the intervention of security forces in Delga, Christians are still harassed by some fanatics; where they throw stones at Christians saying, ‘the army and the police will not protect you from us’,” he said, in a statement on Tuesday (Sept. 17).

The Bishop said more security forces were needed in the streets of Delga. He also said Christians had suffered damage worth millions of Egyptian pounds, including the desecration of every church in the village.

Father Ayoub Youssef, priest of St George’s Coptic Catholic church, told MBC Masr TV that life had finally “returned to normal” for many Christians. However, he said continued police presence was necessary and that Christians should be compensated for their loss of homes and businesses.

Fr. Youssef said houses should be restored because “some have been totally looted… even the furniture and everything”.

He also requested an investigation into the murder of two Christians, Hani Iskandar Thomas and Shafik Zakher.

The Guardian reported that Thomas’s body was dragged around town by a tractor, before some Muslim friends buried him. However, his body was then unearthed and threats were made that if anyone tried to bury him again, they would be killed. In the end, the family paid some Muslim neighbours to do it.

Bishop Macarius, responsible for the Minya region, warned in a statement that the consequences of the sectarian clashes could have lasting effects.

In particular, he warned Christian students returning to their studies that they must guard against viewing their Muslim neighbours with enmity.

“We will not leave Egypt because we love it and this is where we belong,” he said. “We should advise and command our children not to fight with their [Muslim] brethren and not to have any bitterness towards them. God permits this to happen [ultimately] for our own good, He loves us and will change all this to blessings.”