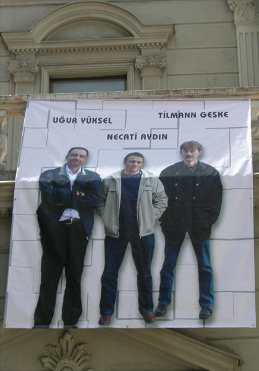 Nearly six years into the court trial over the murder of three Christians in southeastern Turkey, documents have emerged confirming that secret military units were involved in those assassinations and others.

Malatya’s 3rd Criminal Court is forcing prosecutors and the military to turn over previously secret documents, throwing light on a shadowy network believed to be behind several decades of assassination and coup plots in Turkey.

The court is conducting the trial of five men accused of stabbing, torturing and then slashing the throats of Turkish Christians Necati Aydin and Ugur Yuksel and German Christian Tilmann Geske in the Malatya office of Zirve Christian Publishing on April 18, 2007.

Earlier this month, the Ankara Prosecutor’s Office handed over to the Malatya court confidential intelligence files seized from the General Staff’s Tactical Mobilization Group archives, known as the “Cosmic Room” in the Turkish media.

According to the most recent indictment in the Zirve case, the documents confirm the existence and illegal activities of secret military units involved in extrajudicial surveillance and assassinations of members of Turkey’s Christian minority communities.

“These documents have made it easier for us to see the big picture of what kind of an organization this is,” Zirve plaintiff lawyer Erdal Dogan told Taraf newspaper on Sept. 16.

In effect, the attorney said, prosecuting Malatya’s Zirve case is revealing the structures that previously orchestrated the murders of two other Christians – Italian Catholic priest Andrea Santoro at his parish in Trabzon in February 2006, and Turkish Armenian editor Hrant Dink in front of his Agos newspaper office in Istanbul in January 2007.

In the Zirve case, the young suspects were arrested and put on trial, but the instigators behind them obscured their own identities by destroying evidence and mounting clever disinformation campaigns, according to the newly revealed documents.

The assassinations have all been linked to the Ergenekon conspiracy, a ‘deep state’ organization embedded in various branches of the secular Turkish military. According to the Ergenekon verdicts handed down in August, the group’s express purpose was to discredit and bring down the pro-Islamic Justice and Development Party (AKP) government by targeting Christian minorities and causing civil chaos.

Under the guise of protecting “national security,” the Turkish military has until recently refused court orders to reveal intelligence documents or respond to subpoenas to testify in civilian courts. According to the Zirve prosecution indictment, the surrendered Cosmic Room documents reveal that these secret military units were spreading deliberate misinformation against perceived “enemies of the state,” including Christians.

Under the currently ruling AKP, the government signed a National Security Council decision in 2003 declaring “missionary activities” to be a threat.

Lawyers for the Zirve victims complained last year about the Justice Ministry’s abrupt removal of the Malatya prosecutors, and later a High Council prosecutor, while they were pursuing investigations into the Zirve killings. “This cannot be called a ‘routine’ procedure,” Dogan declared at the time.

Since January of this year, presiding Judge Hayrettin Kisa has upped the pace of the drawn-out Malatya trial, holding almost monthly sets of week-long hearings, in line with his stated objective to finish the legal process by the end of 2013.

With a total of 14 suspected perpetrators to examine, the Malatya court has gone through tedious weeks of testimony and cross examination.

Newly submitted evidence has also been probed, including digital copies of telephone conversations and additional court files from the Ergenekon, Balyoz (Sledgehammer), JITEM and Musa Anter cases, all involving alleged death squads within the military.

Several weeks of hearings this spring focused on the testimony and cross-examination of Ilker Cinar, a suspect who testified that he had been hired by elements within the Turkish military to manipulate public opinion on behalf of the ‘deep state.’

Carrying identity papers as a journalist for the Malatya gendarmerie — a law-enforcement arm of the military — Cinar said he worked with the National Strategies and Operations Department of Turkey (TUSHAD), which he claimed was the “armed wing of Ergenekon,” set up in 1993 by another suspect, Ret. Gen. Hursit Tolan.

“Tell people that missionaries want to divide Turkey,” read one of the disclosed TUSHAD documents released in the Cosmic Room files.

Cinar testified he was involved with several of the other accused military suspects in the plan to attack the Christians at the Zirve office. He alleged that there were both black (civilian) and white (military) forces working under TUSHAD which teamed together to carry out the Malatya murders, as well as the Dink and Santoro slayings.

‘This is not the state’

At a May hearing, Cinar testified that he initially believed TUSHAD was backed by the state, but later concluded otherwise. “This formation is behind all the hideous attacks targeting minorities and Christians. This is not the state,” he declared. “If I hadn’t spoken against this, the blame would be on the five youths who were chosen as the victims [to carry out the attacks]. I am listening to the voice of my conscience,” he told the court.

To date, Tolan and former Malatya Gendarmerie Commander Mehmet Ulger have been fingered as key culprits in planning the Malatya plot. But a telephone conversation recorded the day after the murders between Cinar and university theology instructor Ruhi Polat provided evidence of Polat’s involvement.

“Write this in a corner of your head,” Polat told Cinar. “There is no return from this business. We wanted these dishonourable guys just to intimidate them [the Christians]. We said hit them, but they killed them. So you will help us, right?”

The conspirators took immediate and ongoing steps, Cinar testified, to destroy the evidence of their involvement and spread mistruths through the Turkish press – first while the prosecutors were preparing the murder indictment, and continuing throughout the years-long trial. He was threatened a year after the murders by Ulger, and then saw his own name on a death list at the Tarsus police department a few months later.

Professing to be shocked ever since the night he learned that the Malatya plot had turned into murder, Cinar eventually decided to turn state’s evidence and testify in the Zirve trial against his military and police conspirators.

The two Turkish victims were both Muslims who had converted to Christianity. The German widow and her children continue to live in Malatya. The day of the men’s deaths has since been designated a World Day of Prayer for Turkey by the local Protestant community.

An estimated 5,000 converts constitute the small Protestant Christian community in Turkey, where citizens are allowed by law to change their religious identity in a simple administrative procedure.