It has been an astonishing last 12 months for books on the persecution of Christians when there has been such silence on the issue for so long.

First came ‘Christianophobia: A Faith Under Attack’ in late 2012; then the more simply titled, ‘Persecuted: the Global Assault on Christians’ in March of 2013; and now on November 1 the latest and longest of the titles so far: ‘The Global War on Christians: Despatches from the Front Lines of Anti-Christian Persecution’. 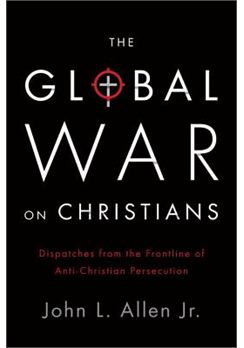 The Global War on Christians: Dispatches from the Front Lines of Anti-Christian Persecution.John L Allen Jr.

Of the three, two are written by journalists with little history of reporting on the religious liberty arena – Rupert Short writing Christianophobia and John L Allen Jr., penning the latest book – as opposed to the battle hardened trio of Paul Marshall, Leila Gilbert and Nina Shea.

This is not always a fault of course, as they bring a bug-eyed enthusiasm to exposing statistics and trends that others in the field may have grown accustomed to tolerating, but what is fascinating is how similarly all three books read – they are all essentially journalistic briefings and round ups of countries and regions where persecution of Christians is rife.

Of the three, it is Allen’s that stands out as the most comprehensive and well written, showing a nodding acquaintance with a far wider range of source material than the two previous books, and bringing a deep knowledge of Roman Catholic sources into play, which is most welcome.

At times, Allen can be a little too generous, and his adoption of the controversially high martyrdom statistics of Todd Johnston’s Center for the Study of Global Christianity – most significantly the claim that the number of Christian martyrs runs at 100,000 per year – can land him into unnecessary trouble when recourse to more sober statistics would have made the point just as well.

The first half of Allen’s book is well written but unremarkable. Like most authors in the field he starts with outrage at the unreported nature of the story of Christian persecution: “Why isn’t the whole world abuzz with outrage over the grotesque violations of human rights at Me’eter?” he asks (p3). This is the vast concentration camp in Eritrea where two thousand Christians are housed in containers that boil in the day and freeze at night.

Marshalling the evidence, he is bold to call the global persecution of Christians a ‘war’: “What other word are we supposed to use? We’re talking about a massive, worldwide pattern of violence and oppression directed against a specific group of people, often explicitly understood by its perpetrators as part of a broader cultural and spiritual struggle”(p8).

He then speculates helpfully as to why this global ‘war’ on Christians is so underreported. The world at large fails to see the story because, following French philosopher and former government official Regis Debray’s analysis, the victims are too Christian to excite the Left and too foreign to interest the Right (p16).

As for the silence of Western Churches, Allen puts it down to most Christians having “no personal experience of persecution” (p17); and also a tendency to interpret Christianity in purely pietistic terms, or even “good cause fatigue”. He also warns against “interfaith correctness” which often hesitates to name inter-faith tensions for fear that dialogue channels may be compromised, and a Church life that is far too focused on internal squabbles and issues.

The first part of the book is an excellent round up of recent persecution incidents and trends, region by region. He covers Africa, Asia, Latin America, the Middle East, and Eastern Europe with a sure-footed and balanced overview.

However, if it is a digest of incidents and trends one requires, probably Marshall, Gilbert and Shea’s round up in ‘Persecuted: the Global Assault on Christians’ is better value, especially as it is keyed to the underlying ‘engines’ that drive persecution, and not merely regions. But Allen does have to include this data. What amazes is that in an age of infographics, not a single publisher can attempt a map, table or graphic illustration of the extent of persecution worldwide. If as Allen says, the West is full of Christians to whom the whole persecution story seems utterly foreign, then to give them no visual help whatsoever borders on the criminal.

Allen’s next two sections set his book apart. He first tackles five myths about Christian persecution that lead to the whole phenomenon being downplayed. Myth #1 is “…that Christians are at risk only where they’re a minority”: he exposes Christians who were killed in Christian majority countries such as Colombia, Kenya and the Philippines. Surprisingly, those he names were put to death by anti-Christian extremists, and he does not mention persecution at the hands of Christian institutions per se.

Myth #2 is “…that no one saw it coming”: a brilliant chapter that rightly chastises, for example, complacent officialdom in Turkey that continually claims that anti-Christian violence is sporadic and purely criminal, when in fact a whole culture is being corralled in an anti-Christian direction.

Myth #3 is “…that it’s all about Islam” and he rounds up a galaxy of threats that lie entirely beyond Islam, such as ultranationalism, totalitarian states, Hindu and Buddhist radicalism, organised crime, and even Christian radicalism, to name just a few.

“No book ranges quite as widely as Allen’s in his portrait of the persecuted church today and the benefits that should accrue to all who pay attention to this underreported phenomenon.”

The final two myths may be the most important, however, in delaying a groundswell of effective outrage at the extent of anti-Christian persecution. One is the myth that “…it’s only persecution if the motives are religious.” Denial strategies are in place such that whenever someone experiences persecution, either “they were too aggressive,” or “it’s probably all exaggerated,” or most significantly, “they were not hurt from a religious motive.”

As Allen writes of this final denial strategy: it “holds that a particular act of persecution or brutality counts as ‘anti-Christian’ only if the motives of the perpetrator are specifically religious” (p216). But what about anti-Nazi Dietrich Bonhoeffer put to death for political motives? Or Eric De Putter in Cameroon, a Frenchman stabbed to death (July 2012) in a strange incident when he may have been intending to expose corruption in a university? Or two Catholic missionaries killed in Burundi by robbers, yet only resident in the region because of their Christian witness? Or Colombian pastors targeted by guerrillas because their faith compelled them to oppose the drug trade? Allen will not have this shrinkage, and opts for a fuller understanding of Christian witness in hostile cultures, so that the culture’s anti-Christian response can be considered as persecution.

The final myth is “…that anti-Christian persecution is a political issue,” and what is meant here is that the suffering of Christians falls victim to politicisation. “Those on the political left may celebrate martyrs to corporate greed or to right-wing police states, but fear to speak out about the suffering of Christians behind the lines of the Islamic world,” writes Allen (p231). Then he adds: “Conservatives may be reluctant to condemn the situation facing Christians in the state of Israel or in regimes that are presently in fashion on the right as allies in the ‘war on terror’…Either way, the result is a reductive reading of the true score of anti-Christian persecution, and a double standard when it comes to engaging its protagonists” (p231).

Allen’s final section is a round up, perhaps somewhat optimistic in tone, of the significance and future role the whole issue could have in terms of politics and church life. Allen expects the persecution of Christians to be a “signature concern” among policy makers in the 21st century.

One hopes he is right, and there is evidence for his view that three megatrends are combining to make religious freedom an ‘idee fixe’: the global South character of world Christianity is putting renewed pressure on the more liberal Christian institutions of the West, then the higher profile of suffering experienced by those in other religions, in addition to Christian suffering going thoroughly global (especially now that local churches and Christian expressions are under threat from a radical secularism). Christianity is also conscripted by Allen as a pro-democracy force, which again could impact upon the policy elite… if they have eyes to see.

It is perhaps appropriate that Allen largely ends with the spiritual implications of global persecution, a subject that is talked too little about. He talks of a new “ecumenism of the martyrs”, which could give a new impetus to the ecumenical movement. But also that the extent of Christians suffering under persecution could renew a theology “from below”, resulting in a stronger theological impetus that identifies the faith with the victims of suffering far more powerfully, whether that suffering comes purely from poverty or persecution; and indeed, for the holistic Allen, the two are rarely separated. Could a new focus on the persecuted millions usher us into a time of renewed Christian missionary ferment, as the sharper edges of Christ’s concern are shown in bold and attractive relief by the growing hostility?

No book ranges quite as widely as Allen’s in his portrait of the persecuted church today and the benefits that should accrue to all who pay attention to this underreported phenomenon. Above all, it is kind in its tone and its treatment of its sources, refusing to pin the cause of the persecuted to one patch of ideological terrain. For that reason alone, one hopes the book will be a great success.

For all that, reading a similar book for the third time in a row makes one long for another Solzhenitsyn to come along and put art at the service of the persecuted again. While Allen has provided the best overall briefing about persecution today – no mean feat – one has a sneaking suspicion that what is needed more urgently is not more brilliant (and better illustrated) summaries, but more authentic and in-depth story-telling.