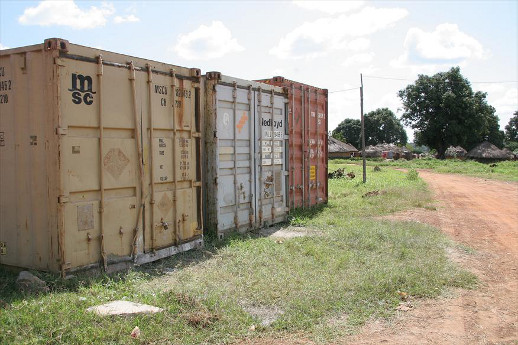 Shipping containers, such as these photographed in South Sudan, are used as makeshift prison cells in neighbouring Eritrea. Wehazit Berhane Debesai died during the week of Oct. 14 in an Eritrea prison, though it was not reported if she was being held in a shipping containter.Courtesy Open Doors International

An Eritrean Christian woman has become the latest known prisoner of conscience to have died in Eritrea.

The death of Wehazit Berhane Debesai, who was in her thirties, comes amidst renewed condemnation of Eritrea’s human rights abuses by the United Nations and NGOs.

Debesai died during the week of Oct. 14 of pneumonia, following a year of imprisonment in harsh conditions, where she was denied access to medical treatment because she refused to denounce her Christian beliefs.

Debesai’s death also coincided with the arrest of around 70 Christians at a prayer gathering in Asmara, the capital.

These arrests bring to nearly 300 the number of Christians known to have been taken into custody this year in what local Christians have called the most serious campaign against the Eritrean Church yet.

This follows the deaths earlier this month of around 380 mostly Eritrean and Somali migrants as they attempted to flee to Europe in ill-equipped vessels, crossing the Mediterranean from Libya.

The United Nations’ special rapporteur on human rights in Eritrea, Sheila Keetharuth, recently told the General Assembly that human rights abuses in Eritrea are causing “countless Eritreans to desert from their positions and flee the country”.

Eritreans are second only to Syrians in terms of the number of those who have fled to Italy by sea up to 30 September this year (UN figures). “It demonstrates the desperation of those who decide to flee, despite the extreme dangers along escape routes and an unknown future,” said Keetharuth.

UN figures claim that between 2,000 and 3,000 people are fleeing Eritrea every month despite a “shoot-to-kill policy” for those who attempt to leave.
More than 300,000 Eritreans are believed to have fled the country in the past decade.

Eritrea’s ambassador to the UN, Arya Desta, rejected these claims, saying they were being used as a “tool of political pressure” for making “unfair and unjust” sanctions. He also denied the implementation of a shoot-to-kill policy.

Debesai had been taking part in national service when she was arrested last year for her involvement in Christian activities outside of the government-sanctioned Orthodox, Catholic and Evangelical Lutheran church groups.

Debesai, who was engaged to be married, was then kept incommunicado in Adi Quala, near the Ethiopian border.

Her fiancé Yohannes was arrested on the same day and also held in Adi Quala.

A representative of  Open Doors, a charity that works with Christians under pressure for their faith, said that many Christian men and women are being held in underground dungeons, metal shipping containers and military detention centres.

“They face exposure, hard labour and insufficient food, water and hygiene. They are regularly denied medical treatment for malaria and pneumonia contracted while in prison or diseases like diabetes, hypertension or cancer that they may have arrived with,” said the representative.

A number of rights organisations, including Amnesty International and Human Rights Watch, have condemned Eritrea’s human rights record. Amnesty International claims that Eritrea’s prisons are filled with “thousands of political prisoners, locked up without ever being charged with a crime, many of whom are never heard from again”.

At least 10,000 political prisoners have been imprisoned since 1993, claims the organisation, and many die in detention as a result of “torture, appalling conditions or suicide”.

Speaking to the BBC World Service in the aftermath of the first Eritrean deaths off the island of Lampedusa, Gaiam Ciprian of London’s South Bank University said that every Eritrean between 16 and 40 has to do national service, and since there is no effective de-mobilisation, so no-one really leaves it.

He also said the Eritrean economy has virtually collapsed.