Ninety-six Christians died in the twin attacks on All Saints Church in Peshawar.World Watch Monitor

The debate over the precise number of Christians martyred each year continues.

In May, a Vatican spokesman told the United Nations Human Rights Council that as many as 100,000 Christians are martyred each year.

That figure stems from the Center for the Study of Global Christianity (CSGC) at Gordon-Conwell Theological Seminary in Massachusetts, recognised as “home to the world’s leading scholars of Christian demographics” according to Judd Birdsall, formerly of the US State Department’s Office of International Religious Freedom, and currently a PhD student at Cambridge University.

While CSGC researchers estimated that around one million Christians were martyred in the first 10 years of the 21st Century, leading to an average of around 100,000 a year, Birdsall said he “found this figure puzzling”. While he said he admires CSGC’s “rigorous and interesting” work, his colleagues’ annual reports for the State Department contained “accounts of dozens, sometimes hundreds, of martyrs. Some Christian… organisations place the number as high as 1,000. Why the discrepancy?”

One such organisation is Open Doors International, which works in more than 25 countries to support Christians who face many levels of “persecution” – from extreme harassment and discrimination to torture and death.

Frans Veerman, Director of the World Watch List (WWL), Open Doors’ annual monitor of the 50 most dangerous countries in which to be a Christian, said that for the WWL 2012 the charity could confirm only 1200 Christians actually killed because of their faith: “1200 as the very, very minimum count”.

He said the figure was likely to be higher than this, but that the organisation could only comment on deaths that could be verified. However, that total still means an average of over 100 deaths a month. Of the 1200, 791 were of Christians in Nigeria, most at the hands of Boko Haram, as World Watch Monitor reported in March.

In 2013, the rise of Islamist movements in, for instance, Syria and the Central African Republic have added to this year’s toll.

Also, the latest figure of deaths in the twin bombs of All Saints, Peshawar is 96 – from one day’s attacks.

“Two thirds of the 2.3 billion Christians in the world today live… in dangerous neighbourhoods. They are often poor. They often belong to ethnic, linguistic and cultural minorities. And they are often at risk. And ultimately I think making that point is more important than being precise about the death toll.”

Open Doors International Director of Research and Strategy Ron Boyd McMillan added: “Every year, since we started WWL in 1991, the number of Christians killed for their faith was in the 100s or 1000s, never in the 100,000s.”

Veerman says that, beyond those Christians whose deaths can be verified, there are two more categories to consider.  The first is Christians who are killed due to increased vulnerability, such as those in conflict areas.

“In conflict and war, it is about double vulnerability – in situations where Christians have not been respected, or have been discriminated against for many years, conflict can make them extra vulnerable in the sense that they draw extra negative attention from the military, or militant social groups, etc.” he says. “They are also the easiest to attack because they are normally not protected – impunity already existing before the conflict. Examples are Sudan and the Nuba people, with many Christians and their communities being quick and easy prey; also Christians within Syria, as Open Doors’ Vulnerability Assessment of Syria’s Christians tried to show”.

Thomas Schirrmacher from the International Society for Human Rights estimates a figure of between 7,000 and 8,000 Christian martyrs each year, and Veerman thinks that, when you add this first extra group of victims to the 1200 verifiable cases, this could be about right.

However Veerman also includes a second group who could be considered as martyrs too: Christians who die due to long-term discrimination, through the deprivation of basic necessities such as clean water and medical care. They experience long-term vulnerability, often where they are treated as a “minority”, says Veerman:

“Open Doors’ definition of ‘persecution’ is ‘any hostility experienced as a result of identification with Christ. This can include hostile attitudes, words and actions towards Christians’… Christians aren’t always directly killed, but so much squeezed with regulations and vulnerabilities that they just perish – not at once, but in the course of years. So some people don’t count that as martyrs because it’s not a question of directly killing them. But if we would count them as martyrs, it would be an enormous number of people.”

However, the precise number of Christians who die due to these factors is impossible to quantify.

The huge disparity between the figures from Open Doors and others, and the CSGC can be explained by the latter’s decision to also include Christians killed in conflicts. 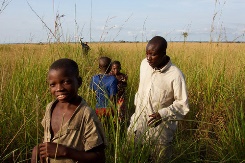 The CGSC includes the deaths of some 900,000 Congolese in its tally.John O’Keefe / Flickr / Creative Commons

The CSGC notes that some 900,000 Christians died in the Democratic Republic of Congo (defined as a ‘Christian’ country) in the first decade of the 21st Century, and this comprises 90% of the total number of Christians killed in that period.

CSGC said that their “broad” definition of martyrdom allowed them to be included in the figure. (Its broad definition of a “martyr” is “believers in Christ who have lost their lives prematurely, in situations of witness, as a result of human hostility”).

However, Ian Linden of the Tony Blair Faith Foundation and associate professor of religion at the School of Oriental and African Studies in London said the deaths of Christians in the Congo were the consequences of a failed state, not martyrdom, as the BBC reports. (Linden was the former Director of the Catholic Institute for International Relations).

Judd Birdsall concurs: “[Christians] are often caught up in conflicts sparked by a complex web of ethnic, economic, political, ideological and other factors. Singling out the religious factor — let alone identifying religious martyrs — is incredibly complicated. That’s not to say religion isn’t a major motivating and mobilising factor in many conflicts”.

However, there is another area of activity apart from war in which Christians can die for their faith.

As Birdsall concedes: “[CSGC’s] definition goes far beyond deaths in the context of public proclamation of belief in Jesus. It is interested in the ‘entire lifestyle’ of the murdered believer. Even if a killer is not targeting Christians on account of their faith, Christians are ‘counted as martyrs to the extent that their actions in such situations are a testimony to their faith’.

“The Center’s broad definition and large numbers force us to reconsider our standard definitions of martyrdom. A martyr is not just a solitary saint mauled by lions in the Coliseum or a reformer burned at the stake. ‘Situations of witness’ vary widely and may seem quite mundane. Many martyrs are ordinary people with extraordinary courage and commitment.”

This definition would also apply in cases when Christians, living out the tenets of their faith, challenge criminality, corruption and entrenched interests such as those of drugs or trafficking cartels, and then pay with their lives for the stance they take. Again it is impossible to always verify such cases.

John Allen, author of the book The Global War on Christians, whose publication a week ago appears to have rekindled the debate, believes the precise figure is ultimately less important.

“I think it would be good to have reliable figures on this issue, but I don’t think it ultimately matters in terms of the point of my book, which is to break through the narrative that tends to dominate discussion in the West – that Christians can’t be persecuted because they belong to the world’s most powerful Church,” he said.

“The truth is two thirds of the 2.3 billion Christians in the world today live… in dangerous neighbourhoods. They are often poor. They often belong to ethnic, linguistic and cultural minorities. And they are often at risk. And ultimately I think making that point is more important than being precise about the death toll.”