Consensus is emerging to begin “contingency planning” to send a UN peacekeeping force to the lawless Central African Republic, the UN’s No. 2 official said on Monday.

Until a UN force, estimated at 6,000 soldiers and 1,700 police, can be deployed, Deputy Secretary-General Jan Liasson urged the UN Security Council to rally international support for a peace operation in the CAR currently managed by the African Union. France’s Defence Minister, responding to a request form the CAR’s transitional government, said today that it will send 1000 more troops as reinforcements to its 400-person force on the ground in the French-speaking country.

Landlocked in the heart of the continent, the Central African Republic has been beset by violence since March, when a coalition of opposition groups, led by Michel Djotodia under the Séléka banner, drove out President Francois Bozizé.

Djotodia took control of a transitional government, which set elections for early 2015 but lost control of Séléka soldiers. He disbanded Séléka in September, but elements continue to loot, rape and murder Christians in particular.

Since September, the mostly Christian and Animist local population have formed self-defence groups, which have now attacked Muslims, in turn inviting brutal reprisals from Séléka and raising fears of inter-faith genocide. 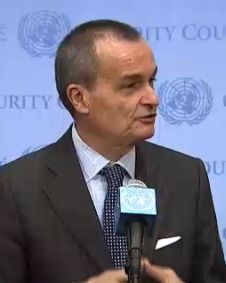 Gerard Araud, French ambassador to the UN.Taken from UN video

“The country in the heart of Africa is descending into complete chaos before our eyes” and requires a capable security force on the ground, Eliasson said. The occupation “must be robust and prevent what has the high potential to result in widespread atrocities”.

“The Secretary-General is particularly concerned about the alarming increase in intercommunal violence”, Eliasson said. “The traditional harmony among communities has been replaced by polarisation and widespread horror. The manipulation of religious affiliations for political purposes has fuelled never-before-seen sectarian violence between Muslims and Christians, particularly in the northwest and southeast parts of country”.

Monday’s council discussion was held on a day when Human Rights Watch issued a report documenting a Nov. 10 attack on the CAR town of Camp Bangui by former Séléka fighters who have assimilated into a broader army whose ultimate command is uncertain.

Based on interviews with survivors, Human Rights Watch said they arrived in Camp Bangui on Nov. 15 to find the town “laid to waste”.

“The centre of the town had been completely pillaged, and the vast majority of homes, sheltering 300 to 400 families, had been burned”, the report said. It said residents said three bodies had been found, but “the death toll is probably higher”.

The report said former Séléka fighters involved in the raid “told Human Rights Watch that they were ‘going to Camp Bangui to fight the anti-balaka’ “. The anti-balaka are armed units created by the ousted president, and are mostly Christian.

A UN team dispatched to CAR in late October reported that violence between the Islamist-dominated Séléka and the Christian-dominated anti-balaka “threatens to degenerate into a countrywide religious and ethnic divide with the potential to spiral into an uncontrollable situation that could include atrocities and have serious regional implications”.

On Monday in New York, French ambassador Araud said once a UN force is authorised, it will take several months to get it into the CAR. To improve security until then, representatives of the CAR, the African Union and the Economic Community of Central African States urged the Security Council for international support of the current peace operation on the ground, known as MISCA.

Eliasson told the council that MISCA’s capabilities are “severely limited”, lacking vehicle and communications equipment. Some units, he said, “are seen as siding with particular communities, based on religion.” But the situation, he said, demands immediate response, despite MISCA’s shortcomings.

“The present forecast”, he said after the closed-door meetings, “is that there will be a strengthened MISCA, and there will also be contributions from member states in agreement with the authorities in the CAR. But we also have been asked by several missions to start contingency planning for a possible UN peacekeeping operation”.