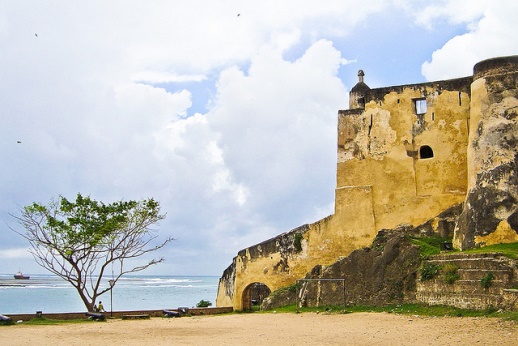 The widow of one of the bombers on the London Tube in July 2005, 29-year-old Samantha Lewthwaite, has been named in connection with the murders of two Kenyan pastors.

Lewthwaite is wanted for seven murders in Kenya altogether, including the recent execution of two radical Muslim clerics, and others. She was previously linked with the Nairobi Westgate bombings, though no charges were brought.

The Kenyan police chief of the regional coastal area (including Kenya’s second city, Mombasa), Aggrey Adoli, told Kenyan media that the security services have Lewthwaite (the daughter of a former British soldier, and colloquially known as the ‘White Widow’) as the top suspect in the deaths of Pastors Charles Mathole and Ibrahim Kithaka recently in Mombasa.

Mathole was a leader of Mombasa Redeemed Gospel Church in Mtopanga and Kithaka a leader of East African Pentecostal Churches in Kilifi.

The murder of the pastors shook Christians in Mombasa, with the Mombasa Church Forum calling on the government to protect churches. One church leader called for the government to issue them with guns, saying to the police to either protect the Christians or give them the means to do it themselves.

There is widespread criticism against the police for their inability to protect Christians in the coastal regions.

“Our many churches are not under any protection. They do not have walls or gates. The government should issue AK-47 rifles to every church so that we can stop them from being burnt, our property from being looted and our pastors and Christians from being killed,” said Lambert Mbela, a pastor at Mathole’s church, during his funeral.

Christians from different churches said that such a move would contradict Biblical teachings but argued that it showed the frustrations of the increasing level of insecurity.

“I don’t think arming Kenyan [clerics] will ensure security. However, the government should see this as the writing on the wall. Kenyans are getting tired of the continuing insecurity,” said the Rev. Peter Karanja, the General Secretary of the National Council of Churches of Kenya, at a news conference in Limuru, near Nairobi.

Kenya’s top Muslim leader also added his voice to halt the calls to arm pastors: “It is a good idea, but not all clerics should get the guns. Some are rogue clerics and may pose more danger to other religious leaders,” said Sheikh Juma Ngao, Chairman of the Kenya Muslim National Advisory Council.

The ‘White Widow’ has also been named as the key suspect in the executions of two radical Muslim clerics, Aboud Rogo Mohammed and his successor, Sheik Ibrahim Rogo, after reportedly falling out with them.

The murder of the two radical clerics had led to the worst violent protests Mombasa has seen. Muslim youths torched a Salvation Army church and also caused destruction elsewhere.

Lewthwaite is said to have ordered the murder of Mathole, 41, after she became paranoid over his contact with Kenyan intelligence officials. Mathole’s widow is reported to have told the Star newspaper that her husband had received death threats weeks before he was killed, after allegedly being approached by Kenyan Security Services. It is believed they wanted him to inform them if any young Muslim men had approached him for help to avoid being recruited by Al-Shabaab.

Police boss Aggrey Adoli said: “She is without a doubt an incredible threat to national and international security. We are working round the clock to bring her in, to stop her causing more carnage.”

Lewthwaite is apparently not working alone. Security Services say she has seven disciples: a Tanzanian preacher, a Somalian, a Ugandan and three Kenyans. They are also on the radar of security services.