Lawyers took shelter in a nearby office, using furniture to barricade the door from the mob outside.China Aid Association

An attack on lawyers hired to defend 17 detained Christians in central China, shown around the world on Sky TV, has drawn attention to a case which may not be as clear-cut as it has been reported.

The church leader at the centre of the dispute, Pastor Zhang Shaojie, appears to have been pushing the boundaries of what might be deemed ‘appropriate’ for a church leader within the government-sanctioned Three Self Patriotic Movement (TSPM), not least in now hiring lawyers known to be close to the China Aid Association, which alerted international media to the complex case.

These lawyers, who announced that they were beginning a hunger strike – until allowed access to their clients – were beaten and kicked, reportedly by a coachload of government-hired aggressors.

This was shown on Dec. 13 by Sky News, a commercial operation owned by BSkyB and distributed by Fox International Channels. Its reporter had visited Nanle in Henan Province to follow up on the missing Christians’ case.

According to Associated Press, lawyer Liu Weiguo said someone threw a brick at his head, causing it to bleed, and several other lawyers also were hurt as the crowd of men and women attacked them.

The lawyers had been called in over the case of 24 members of Nanle County Church, including five church leaders, who were arrested in mid-November. Seven are since reported, by the China Aid Association, to have been released.

The precise charges for the remainder are unknown, but their arrests are thought to relate to a dispute over a piece of land on which the group hoped to build a new church.

The government in Nanle County had declared that the current church building was not safe and had closed it on Nov. 30.

The previous local government is thought to have agreed to exchange the church’s land for new land on which to build a new church, but this offer was then withdrawn, after the change to a newly appointed Head of County. A series of protests by church members followed, leading to the arrests.

Communist authorities have often clashed with members of unofficial, or “house”, churches, with demolitions of houses of worship and beatings of parishioners not unknown. But it is unusual for authorities to crack down on a state-sanctioned church such as Nanle County Church, which is part of the TSPM.

However, local sources told World Watch Monitor that Pastor Zhang is one of an increasing number of TSPM pastors who do not always strictly keep to the government line. He is said to have attempted to cooperate with “house churches” and, in a high profile manner, to do things outside the boundary of the religious office which oversees all TSPM churches.

They added that the case against Pastor Zhang and his church does not necessarily suggest the religious environment in China is becoming less tolerant. In general, they said the government’s relationship with the Church is improving, but the implementation of policies on religious institutions varies depending upon the local officials. 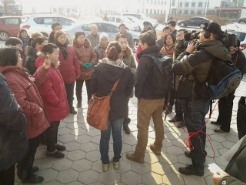 Meanwhile, they said the media may not have helped matters by increasing the profile of the case.

Lead lawyer Xia Jun told Sky News’s China Correspondent the group that assaulted them were “paid and backed by the local government… They come and go as required. All this is organised behind the scenes by the government.”

He said the same group had attacked him the previous day and that the case was for “pure religious causes”.

“Since [the 24] were arrested, all the activities like worshipping and services can’t take place as normal,” he added.

However, local sources told World Watch Monitor that Xia’s high profile as a human rights lawyer, closely related to the China Aid Association, headquartered in the USA, may have increased the government’s hostility towards him. He has been involved in many court cases with “house churches”, they said.

Reports say Nanle County Church claims those arrested on “fabricated criminal charges” have been tortured and that their arrests amount to “religious persecution”.

In preventing lawyers from visiting the accused, the church claims that local law enforcement agencies have “disregarded” and “violated the law” and have not “followed due legal procedure”.

Freedom of religious belief is guaranteed by Article 36 of the Chinese Constitution, although it is limited to state-sanctioned religious bodies such as the TSPM. Those who practice their religion outside these parameters can be accused of participating in illegal activities.