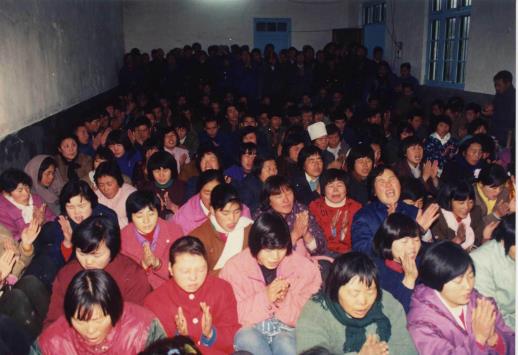 A church in eastern China has written a letter to the Chinese government, demanding permission to stage a protest against the detention of 23 members of its congregation.

The Nanle County Church in Puyang, Henan province, which comes under the ‘official’ state-sanctioned Three-Self Patriotic Movement (TSPM), claims the majority of those detained, including the church’s leader, Fan Ruiling, “have not received a criminal charge, nor any written notice, nor have their families been told where they are detained”.

Four other church leaders – Zhang Shaojie, Zhao Guoli, Wu Guishan and Zhang Cuixia – were arrested. The church says their whereabouts is “unknown and no one knows whether they are alive or dead”.

Communist authorities have often clashed with members of unofficial, or “house”, churches, with demolitions of houses of worship and beatings of parishioners not unknown. But it is unusual for authorities to crack down on a state-sanctioned church such as Nanle County Church.

The arrests took place on November 16 and 17, after a third group of church members had visited Beijing to protest against incidents related to church property.

Following the arrests, the church complained that government officials have stalked the church premises and harassed its members. It also claims that lawyers have been prevented from meeting those arrested.

Nanle County Church says those arrested on “fabricated criminal charges” have been tortured and that their arrests amount to “religious persecution”.

In preventing lawyers from visiting the accused, the church claims that local law enforcement agencies have “disregarded” and “violated the law” and have not “followed due legal procedure”.

In its letter, a copy of which was seen by China Aid, the church says that hundreds of government officials have “intruded” into the church without permission and “severely disrupted” church services by “taking photographs and videotaping meetings”.

“Many believers were threatened and received warnings from government agencies who forbade believers to leave their homes to attend worship service and severely interfered with the religious freedom of the believers of our church,” the church writes.

The church adds that it expects the required permit for it to hold public protests about the detentions to be granted “as soon as possible”.

China Aid condemned the arrests, saying: “This case against even the officially approved churches again shows the current Chinese regime has no intention to relent its increasing persecution of citizens for religious freedom. The mere proclamation of a blueprint for economic reform cannot make the ‘Chinese dream’ fully realised unless the Chinese government respects its citizens’ fundamental rights and freedom of religion and conscience. We call upon the Chinese top leaders to intervene immediately and release these leaders and hold abusive officials accountable.”

Freedom of religious belief is guaranteed by Article 36 of the Chinese Constitution, although it is limited to state-sanctioned religious bodies such as the TSPM. Those who practice their religion outside these parameters can be accused of participating in illegal activities.