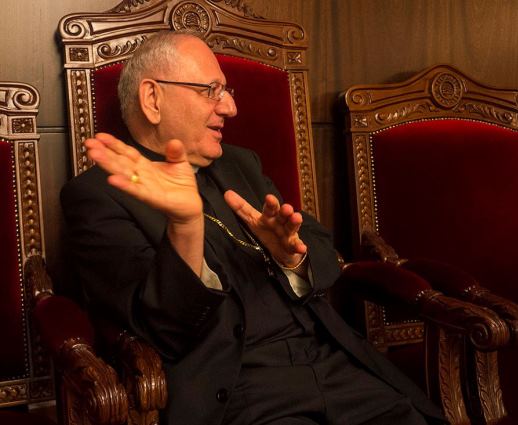 The Archbishop of Baghdad, Louis Raphael I Sako, has called on the West to help put an end to the “mortal exodus” of Christians from the Middle East.

Sako, who is also Patriarch of Babylon, told a conference in Rome, “Christianity and Freedom: Historical and Contemporary Perspectives”, that the West must assist the Muslim nations of the Middle East in “modernising Islam’s approach to religious freedom” and “convince Muslim nations that their repression and persecution of their minority Christian communities is not only harming the Christians, but is harming the societies themselves”.

Sako, a keynote speaker at the conference run by the Religious Freedom Project at Georgetown University, which recently hosted the UK’s Baroness Warsi, said the situation in Iraq over the past 10 years has gone from bad to worse, and that he can see similar situations unfolding in Egypt and Syria.

“In Iraq, after 10 years, we still don’t have security. There are daily attacks, explosions, kidnappings and murders. The same scenario is happening in Syria and in Egypt,” he said.

The Iraqi Archbishop pointed towards the rise of political Islam as one of the major opponents of the Church in the Middle East, while he said the US-led invasion of Iraq has “destroyed the country”, being replaced by a period of sectarian violence.

He added that governments seem “generally incapable” of controlling the sectarian battles between Sunni and Shiite Muslims.

“Suffering became an everyday struggle for all Iraqis, but especially for Christians,” he said. “Muslims are always strong enough with their tribes. They also have the advantage of living in a country ruled under Islamic orders. But Christians and other minority groups have been worn down by a worsening security situation.”

Since 2003, Sako said more than 1000 Christians have been killed in Iraq (and others kidnapped and tortured), while 62 churches and monasteries have been attacked.

“Islamist extremists want to take advantage of the current situation in order to empty the Christian presence in the Middle East, as if it were an obstacle for their plans.”

He added that less than half of Iraq’s 1.2 million Christians in 1987 remain – “and the numbers continue dropping”.

The United Nations Committee for Refugees recently stated that 850,000 Iraqi Christians have left since 2003.

Sako said the West “does not understand” the difficulties and fears of Middle Eastern Christians.

“Religious radicalism is growing and becoming very aggressive,” he said. “Religious violence is on the increase across the Middle East, breaking up communities and destroying relations between peoples from different religious traditions. This violence is damaging the very fabric of Middle Eastern societies. Islamist extremists want to take advantage of the current situation (that is, the anarchy in several regions) in order to empty the Christian presence in the Middle East, as if it were an obstacle for their plans.”

He called on the West to “open its eyes” to see the reality of the situations facing Christians in Iraq, Syria and Egypt.

The Archbishop echoed Pope Francis’s declaration that he “would not accept” a Middle East without Christians, which Sako said would “fundamentally alter the contours of culture and society in nations such as Iraq, Syria, and Egypt” and “deal a severe blow to any hope of pluralism and democracy”.  Christians are “an integral part of the national Arab tissue,” he said.