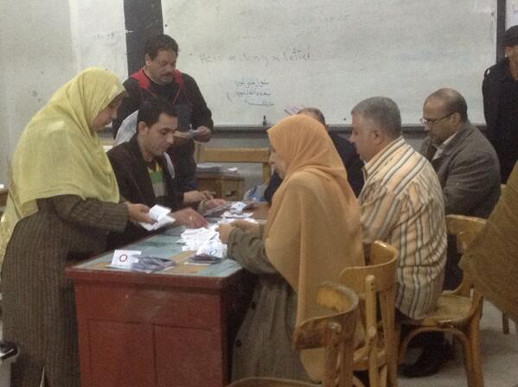 For the second time in 13 months, Egyptians have approved a new constitution. Compared to the constitution they just tossed aside, the new charter promises Christians a stronger standing and better representation than ever in the history of the Arab Republic. Coptic Pope Tawadros II and other Christian leaders endorsed it.

After the brief but disastrous rule of the Muslim Brotherhood, the new constitution is cause for optimism, to be sure, but the document by itself won’t change the situation for Christians in Egypt. Like other national charters, it announces principles of religious freedom. But Egypt also needs lawmakers and judges who establish and interpret laws in line with the constitution’s ideals. Here, the future is not as clear: The new constitution promises Christians a place in its legislative assemblies, for example, but not in its courts.

Even so, early returns indicate the new constitution has won overwhelming approval, even as many of the supporters of the former Islamist regime of the Muslim Brotherhood and ousted president Mohamed Morsi sat out the vote in protest.

Egypt’s new constitution represents yet another swing of the pendulum since the revolution of 2011 that toppled autocrat President Hosni Mubarak. The Muslim Brotherhood mobilised 13 million voters in June 2012 to elect Morsi, who supervised work on a new constitution. Work on the document lagged as frustrated Christians and other liberal elements dropped out of the Islamist-dominated drafting assembly. Late in 2012, Morsi ordered the remaining delegates to finish their work in one night, and pushed the draft out for a quick vote.

Widespread anti-Morsi protests backed the military’s removal of the president in July. The Muslim Brotherhood was outlawed, and work began on a new constitution.

The new charter reflects the desire to undo Muslim Brotherhood influence, and expresses an ultra-nationalism that idealises the army as the protector of the people’s will. As many Egyptians pointed out, voting in favour of the new constitution was an endorsement of the June 2012 revolution that drove out Morsi. The new constitution is a nationalist project intended to counter the Brotherhood’s Islamist policies and focuses on the unity of the Egyptian people, bringing together Islam’s crescent and Christianity’s cross. Consequently, supporters of the revolution would have been seen as traitors to the nationalist cause if they had voted against the document.

Highlighting the government’s appeal to national unity, Egypt’s interim president Adly Mansour visited the Coptic Papal Seat at Saint Mark’s Cathedral, the first Egyptian head of state to do so in more than 40 years. This gesture did not go unnoticed; Pope Tawadros endorsed the new constitution and urged Copts to vote in favour of it.

The new constitution has one major element in common with the document it replaces: It establishes Sharia as the principle source of legislation. But there is a difference.

Prior to the Brotherhood’s ascension to power in 2012, the interpretation of the “principles of Sharia” had been left to the courts. The 2012 constitution specifies, in Article 219, that the principles “include general evidence, the foundational principles of Islamic jurisprudence (usul ul-fiqh), and the reliable sources from among the Sunni schools of thoughts (madhahib)”. The potential consequences were far-reaching; Article 219 allowed Sharia law to penetrate all spheres of social and personal life, paving the way for literal and archaic interpretations of Sharia, as well as application of punishment.

It also removes Article 212, which had granted the government far-reaching powers to control endowments, and thus church finances, and by extension their operations and social services. By removing Article 212, the new constitution takes the power of the church purse away from a government that will continue to be dominated by Muslims in a country where Islam remains the state religion.

Both the old and new constitutions ostensibly guarantee the independence of Christian and Jewish religious affairs, and several new articles theoretically imply greater religious freedom. Article 64 sets forth the “absolute” freedom of belief (instead of the “inviolable” freedom established in the previous document), though it is restricted it to the Abrahamic religions, leaving Baha’i, Shia, atheists and agnostics without constitutional cover. Article 74 prohibits the founding of religious political parties and parties that discriminate against “sex, origin, sect or geographic location”. Article 53 promises all “citizens are equal before the law, possess equal rights and public duties, and may not be discriminated against on the basis of religion, belief, sex, origin, race, colour, language, disability, social class, political or geographical affiliation, or for any other reason”.

An activist who works closely with persecuted Christians in the countryside said the addition of Article 63, which forbids forced displacement of citizens, is especially welcome. Since the 1990s, the state has turned a blind eye to displaced Christians in Upper Egypt and other rural regions. Under threat of violence and faced with massive repression and discrimination by Islamists, tens of thousands of Christians had forcibly been displaced.

Constitutions typically confine themselves to broad principles, and usually are not the place for the detail of carrying them out. But Egypt’s new charter speaks to several specific Christian concerns.

In contrast to the previous constitution, for example, the new constitution acknowledges the cultural and historic status of Christians, and grants them greater political representation. In both the preamble and in Article 50, it refers to the cultural and historic heritage of the “Church of Jesus” and the Copts in particular. Article 244 enshrines “appropriate representation in the first House of Representatives” for Christians, among other minorities. Article 180 reiterates this principle on the level of local councils.

The new constitution also tackles one of the most enduring and sensitive issues for Egypt’s Christians: Church building and renovation permits. Article 235 promises that “in its first legislative term after this Constitution comes into effect, the House of Representatives shall issue a law to organise building and renovating churches, guaranteeing Christians the freedom to practice their religious rituals”. It’s the first time in Egypt’s history that a constitution has addressed this issue.

It is worrisome, then, that such detailed provisions for Christians are not to be found in other places in the document. The judicial sector, for example, remains mostly unreformed. It gains a measure of independence in the new charter by moving the power to choose the prosecutor general from the president to the Supreme Judicial Council. But there is no provision reserving a share of seats on the bench for Christians. The articles in the new constitution concerning the courts are the same articles in the old constitution concerning the courts.

Elsewhere, there is nothing to indicate whether the rights of religious minorities will be mirrored in, for example, educational curricula. Nor are there new mechanisms to hold individuals and institutions accountable for breaches of constitutional rights.

“It is the best constitution Egypt has had yet, but … [it is] still disappointing,” said an Egyptian human rights activist, who asked not to be named. The military-run interim government waged an intense vote-yes campaign, and dissenters – including some of the leaders of the 2011 revolution – have found themselves in trouble with the authorities.

So indeed, compared to the last constitution, Christians have more rights. However, the structural, societal, bureaucratic and judicial discrimination that has plagued Egypt’s Christians since the founding of the Arab Republic has historically been a consequence of the non-implementation of the different constitutions. Without any new enforcement mechanisms, it is not likely that much will change for Egypt’s Christians. Their rights will remain theoretical.

To put it in the words of a government official from the Egyptian Foreign Service, before this week’s vote: “This constitution is written for foreigners, not for Egyptians. Egyptians do not respect simple traffic rules; How could they respect constitutional articles? No one read the constitution. Still, the constitution will be passed with a majority vote of at least 70%.”

At best, this new constitution represents a return to the pre-Brotherhood status for Egypt’s Christians. The wine-skins are new; the wine, however, is not.

Markus Tozman is a graduate student of the Middle East at Johns Hopkins University SAIS. The views expressed in this analysis are his own.