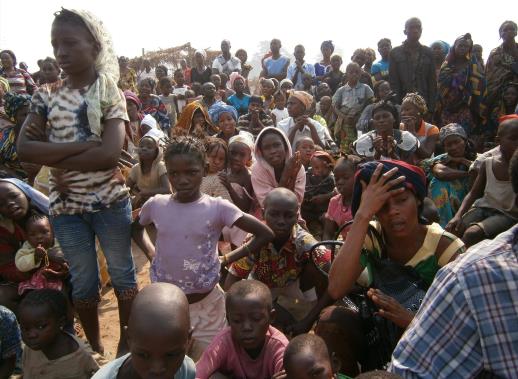 Two of the most senior religious figures in the Central African Republic (CAR) visited London this week to urge the UK to support the deployment of a UN-led peacekeeping operation in the war-torn country.

Dieudonné Nzapalainga, the Catholic Archbishop of Bangui, and Imam Omar Kobine Layama said the current peacekeeping force of French troops and the African Union is insufficient and that Central Africans live in fear.

“The situation has deteriorated in ways that are beyond comprehension,” wrote the leaders in a letter to UK Prime Minister David Cameron. “Heinous crimes are being committed by various armed groups, including murder, rape, kidnapping, pillaging, and the destruction of houses. Over one million of our people have been displaced by violence and two million require urgent humanitarian assistance. Despite the presence of 1,600 French troops and 4,000 African Union-led forces, violence and fear dominate daily life.”

The letter added that the country has known “cycles of crises for decades [but] we have never seen a situation as dramatic and alarming as it is today. Throughout the years, our people have lived side by side, in harmony. Today, we witness Christians and Muslims turning against one another; committing crimes of unspeakable violence against their own brothers and sisters”.

Mgr. Nzapalainga rejected the notion that the Central African Republic should be divided into two countries – one Muslim, the other Christian.

“The CAR is a country that is united and indivisible; we must keep it that way,” he told the BBC. “We won’t find solutions in division. There is a richness in diversity and we must protect that. When I was young, at Christmas time, we shared our toys with our Muslim friends and at Ramadan we would go and eat mutton with our Muslim friends. We were happy to do that; we went to school together, we played together, we were as one, without caring whether one was Muslim or Christian. We were brothers, Central Africans and proud of it.”

The Imam added that religious figures have taken on a critical role in the crisis as peacemakers, with many politicians afraid of speaking out in case of repercussions against themselves or their families.

“We [the religious leaders] are doing our job as humanitarians because religion is human,” he told the BBC. “If political figures aren’t talking, it may be because they are scared it will put their lives or their family’s lives in danger, but we’re shepherds and we must protect our flock.”

“Despite the presence of 1,600 French troops and 4,000 African Union-led forces, violence and fear dominate daily life.”

Earlier this month, Nicolas Guérékoyamé-Gbangou, head of the Central African Republic Protestant Church, who was also in the UK, claimed the conflict’s roots lay in political issues, but that now religious differences are being used as an excuse for violence.

“There is no Christian militia and there is no Muslim militia as well… This conflict is not religious at all,” he said.

Originally the three leaders were to travel in Europe together, but a personal bereavement meant that Rev. Guérékoyamé-Gbangou returned home early.

On Wednesday (January 29), members of the disbanded Séléka group threw four grenades into Elim-Mpoko Church in Bangui, which is led by Guérékoyamé-Gbangou. 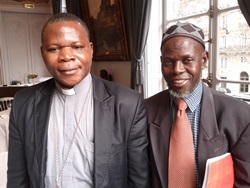 The Elim Mpoko Church is one of the 57 sites where displaced people have been hiding since the December escalation of violence in the capital. At the time of the attack it housed an estimated 1,500 refugees. MISCA peacekeepers used to protect this site, but it is understood that they were not present when the attackers struck.

The Central African Republic has been beset by violence since December 2012, when a coalition of rebel groups, led by Michel Djotodia under the Séléka banner, moved through the country to eventually drive out President Francois Bozizé in March 2013.

Djotodia took control of a transitional government, but lost control of Séléka soldiers. He disbanded Séléka in September and resigned from his post earlier this month.

Ex-Séléka members continue to loot, rape and murder Christians in particular. Since September, many local populations have co-opted already-existing self-defence groups named anti-Balaka, which have attacked the ex-Séléka and other locals, in turn inviting brutal reprisals from ex-Séléka members and raising fears of inter-faith genocide.

In December, the UN Security Council authorised the expansion of the African and French military forces currently attempting to maintain security in the CAR, and started planning for the possible conversion of those forces to a UN-managed peacekeeping operation.