Tribal attacks have claimed many lives in central Nigeria in recent months. In November, around 40 members of the Berom community were killed and buried in mass graves.World Watch Monitor

Fourteen people were killed when gunmen attacked Rapyem village in the early hours of Feb. 20. The victims were fast asleep when the attackers stormed into the village with guns and machetes, local media reported. All the victims were Christians.

Two days later, in the early hours of Feb. 22, gunmen attacked villagers living along the highway linking the local governments of Barakin-Ladi and Bokkos. Twenty-nine people were killed as they slept and a further 17 were injured, Julius Bala, the leader of a vigilante group of youths, told local media.

The attackers were repelled following a fierce battle with security forces, the spokesman of the Special Task Force, Captain Salisu Mustapha, told reporters.

Although the identity of the attackers is unknown, Fulani herdsmen are suspected of carrying out both attacks, which targeted Berom communities. Intercommunity clashes are frequent in this central state of Nigeria, between the mainly Christian indigenous Berom communities and the Muslim-dominated Hausa/Fulani tribe.

“Usually we end up saying the attackers are unknown because there has not been the chance to arrest any of them, but we cannot be far from the truth to say that they were Fulanis,” Rev. Soja Bewarang, Chairman of the Christian Association of Nigeria in Plateau state, told World Watch Monitor. “We are truly sad and continue to condemn the action of the attackers. So many were killed for no reason. We do not know to whom to report as everybody that matters is aware of the situation. We keep looking up to God for our protection and an end to the matter.”

The Berom community is comprised mostly of farmers, whereas the Hausa/Fulani minority are predominantly herdsmen.

Their rivalry over access to natural resources has been exacerbated over time, despite the deployment of a Special Task Force, a joint Army and police unit aimed at tackling the widespread violence in Nigeria’s so-called Middle Belt, on the dividing line between the mainly Christian south and predominantly Muslim north.

At least 163 people have been killed in attacks by suspected Fulanis since the beginning of the year. The tactics used in the attacks have resembled those employed in guerrilla warfare, with attackers taking the community by surprise, striking and then soon disappearing, according to Yunusa Nmadu, Executive Director of Christian Solidarity Worldwide in Nigeria. 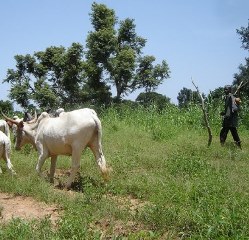 The majority of Fulanis are herdsmen, while the Berom community is comprised mainly of farmers.ACEI Cheung / Flickr / Creative Commons

“Families are targeted because the whole idea is to wipe away an entire community. In some cases prominent families such as community or religious leaders are targeted so that the followers can be weakened,” he said.

Nmadu added that the sophistication of the weapons used hinted that the attackers were acquiring them from another source.

“They must have some very wealthy sponsors that are faceless,” he said. “It might also be that the Fulani herdsmen have been infiltrated by Boko Haram and are recruiting them for such attacks.”

Boko Haram, which aims to create an Islamic state in Nigeria, has carried out deadly attacks in recent weeks, including the latest yesterday (Feb. 25) at a school in Yobe state, where dozens of boys were killed.

Though both Muslims and Christians have died in Boko Haram’s attacks, Nmadu said their natural obstacle to achieving an Islamic state would be the Christian religion and the security forces who have sworn to protect the sovereignty of the country.

On Feb. 20, the Islamist group, whose attacks have been concentrated on north-east and central Nigeria, threatened to extend its insurgency to Nigeria’s oil-rich Niger Delta in the south.

“You will in coming days see your refinery bombed,” warned its leader, Abubakar Shekau, in a video.

President Goodluck Jonathan declared a state of emergency in the three northern states of Borno, Adamawa and Yobe in May 2013, deploying the army to the region, but without significant impact. The recent upsurge in violence in the region has led to increased criticism of the government’s inability to root out the militants.

“The authorities have so far failed to fulfil their task of ensuring peace and security to Nigerians in every area of the country,” Mgr. Ignatius Ayau Kaigama, archbishop of Jos and president of the Nigerian Episcopal Conference, told the Catholic news agency, Fides.

However, Nmadu said he remains optimistic. “I believe that Nigeria will come out of this crisis strong, though unfortunately many will have to pay with their blood,” he said. “Military action alone will not win the battle. The war is also an ideological war.”