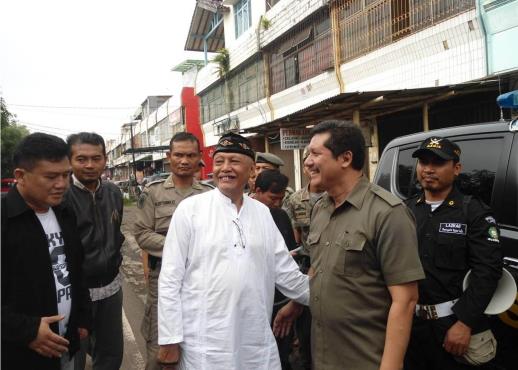 All smiles: A Muslim leader shares a joke with local police officers after protests in West Java that secured the closure of four churches.Courtesy Open Doors International

Oferlin Hia, pastor of the Christian New Covenant Church, is leading a petition to have the churches reinstated. He has lodged a complaint with the country’s Inter-Religious Harmony Forum and sent a letter to the regency chief, asking for an alternate venue. He has yet to receive a response.

“The churches are still in good spirits, but uncertainty lingers,” Hia told World Watch Monitor. “Using other church buildings is just a temporary solution; they’re not sure how long it could last.”

Before the enforced closure, the four churches – and another church that managed to avoid closure – had faced protests during worship services on Nov. 17 and Dec. 1, during which one church member was assaulted while attempting to take photographs. 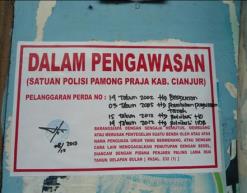 Signs were fixed onto the churches proclaiming them shut.Courtesy Open Doors International

Witnesses said that police officers were present, but offered little resistance and later assisted protesters in affixing signs onto the churches proclaiming them shut.

The protesters demanded that the churches obtain a permit to hold Christian gatherings.

Pastor Hia said the congregations had been meeting in local shops or offices while awaiting permits to construct church buildings.

“We had been applying for a permit, but local government officials didn’t respond although all requirements had been met,” he said.

According to local laws, a church must possess at least 90 members and gain the consent of at least 60 neighbours to secure a building permit.