President Goodluck Jonathan declared a state of emergency in Nigeria’s worst affected northern states in May 2013, deploying the army to the region, but without significant impact.Commonwealth Secretariat / Flickr / Creative Commons

In the days before a vicious wave of attacks on Feb. 15 that killed hundreds in northeast Nigeria, villagers fled their homes, fearful something terrible was about to happen. But the army was nowhere to be seen, a church leader says.

Militants of the Islamist Boko Haram sect swept out of the hills and bush of the Gwoza Mountains and into eight villages across Borno and Adamawa states. Armed with rifles, knifes and fire, they killed at least 200 and burned scores of homes and shops.

As many as 121 of the dead were from the Borno village of Izghe, a predominantly Christian town in the Muslim-majority northeast. Near midnight on Feb. 15, gunmen dressed in military fatigues and chanting “Allahu Akbar”, meaning “God is great”, rode in on trucks and motorcycles, survivors and local sources say. The attackers ordered villagers to gather together and then opened fire, chasing and killing any who attempted to escape and slitting the throats of several victims.

Though Borno and two other north-eastern states have been under an official state of emergency since May 2013, there were no Nigerian soldiers standing between the attackers and the residents, a church leader told World Watch Monitor. Two days earlier, 10 soldiers had been killed in a clash with members of Boko Haram in that area, but had since withdrawn, according to the District Head of Izghe, Mallam Bulama Apagu.

A local church leader told World Watch Monitor that rumours of an eventual reprisal attack by Boko Haram, without protection of the army, prompted hundreds to flee.

“Christians live in perpetual fear of being attacked. In recent days, it becomes very risky to travel from one place to another as attacks have become recurrent, almost on daily basis. We feel lonely and abandoned and rely on God for our security,” the church official said. World Watch Monitor is withholding his name to preserve his safety.

A survivor of the attack, farmer Barnabas Idi, who scaled the fence of his house and crawled for about 40 minutes to safety, was quoted in news reports saying security forces were not present during the attack, which lasted five hours.

The recent upsurge in violence has raised criticism over the government’s ability to root out the militants.

“The authorities have so far failed to fulfil their task of ensuring peace and security to Nigerians in every area of the country,” Mgr. Ignatius Ayau Kaigama, archbishop of Jos and president of the Nigerian Episcopal Conference, told the Catholic news agency Fides. “Despite the efforts and significant resources invested to combat these fanatical groups, policymakers and the Nigerian military have not yet managed to get to the bottom of the problem.”

Nigeria’s military ruler during a portion of the 1980s, retired Gen. Muhammadu Buhari, condemned the continued violence in Borno state.

“There is no justification for this wanton disregard for the sanctity and dignity of human life. Any ideology that traffics in terror and violence is a devilish ideology that has no place in a civilised society,” he said in a statement posted on his facebook page on Feb. 16. 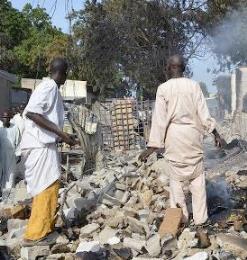 The Northern States Governors Forum, representing Nigeria’s 19 northern states, urged the federal government to arrest the violence before it spreads to other parts of the country. And the United Nations human rights office condemned “in the strongest terms” the killings in Izghe and elsewhere. About 367 people have been killed at the hands of Boko Haram in 22 separate incidents during the first six weeks of 2014.

“We are appalled by the extreme and indiscriminate violence which Nigeria has being witnessing in recent times, including the attacks on two villages on 11 February, which left 39 people dead, 65 injured and reportedly 2,000 homes destroyed,” spokesperson Ravina Shamdasani told a news conference in Geneva (on Feb. 18).

Situated in Borno state near the Cameroon border, Izghe is a Christian enclave in Nigeria’s predominantly Muslim northern states. On the same day, other villages in both Borno and Adamawa states, including Kirchang, Kwambula, Shuwa, Dagu, Yinagu, Bitiku and Yazza, were attacked by gunmen.

The first reports indicated between 90 to 106 people were killed. But the death toll has increased as volunteers have discovered more bodies in destroyed houses, nearby bushes and farmlands. The victims were buried in mass graves of 15 bodies each, a local leader told news media. More than 10,000 people have fled across the Borno state border into Adamawa state for fear of new Islamist attacks, local government chairman Maina Ularamu told the Associated Press.

Borno, Adamawa and Yobe states have been the most affected by the five-year Islamist insurgency in Nigeria. President Goodluck Jonathan declared a state of emergency in the three states in May 2013, deploying the army to the region, but without significant impact.

Nigeria ranks No. 14 on the 2014 World Watch List, a list of the 50 countries where life for Christians is most difficult, according to Christian charity Open Doors International. The violence of Boko Haram, which has killed thousands of Christians since 2009 in its attempt to establish fundamentalist Islamic rule, is a major reason for the country’s high ranking. But Open Doors International says the situation is more complex, especially in Nigeria’s 12 northern states where Islamic law is in place and “where local government and social groups leave hardly any space for Christians to live their own lives”.