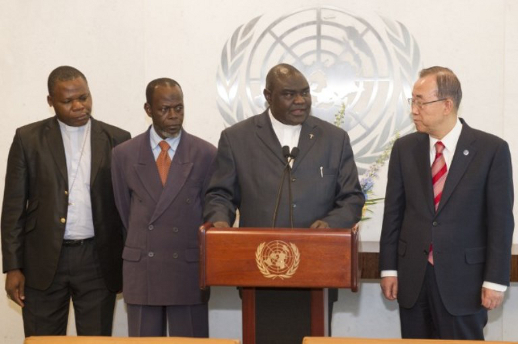 The three top religious leaders of the Central African Republic have once again travelled to the United Nations in New York to urge the Security Council to act quickly on its recommendations for a UN peacekeeping operation, as violence in their country continues. Despite a change of president and the arrival of a few thousand peacekeeping troops (although the EU’s promised 500 troops have not arrived on schedule) the slaughter has not abated.

The Catholic Archbishop of Bangui, the leader of the Protestant churches, and the Imam of Bangui also met UN Secretary-General Ban-Ki-moon, who said “We want to pass on an essential message: that the conflict in the Central African Republic is not about religion.” Ban described the three prelates, and their joint ‘platform for peace’ initiative, as a “powerful symbol of their country’s long-standing tradition of peaceful co-existence…Religious and ethnic affiliations are being manipulated for political purposes”, he said.

The Central African Republic has been plagued by violence since December 2012, when a coalition of Islamist rebel groups, led by Michel Djotodia under the Séléka banner, moved through the country to eventually drive out President Francois Bozizé in March 2013. Djotodia took control of a transitional government, while Séléka elements continued a campaign of looting, rape and murder, with a particular focus on Christian communities.

“Many church leaders we interviewed in the CAR observed that along with the military and political aspects of the political change was the intention to Islamise the country,” said Arne Mulders, a research specialist for Open Doors International, a charity that provides aid to Christians under pressure because of their faith.
Djotodia resigned in January, and the National Assembly appointed Catherine Samba-Panza president, making her the first female president of the CAR. As Séléka influence waned and the rebels retreated to the north and to neighbouring Chad and Sudan, local Muslims perceived as accomplices of Séléka have faced attacks by self-defence militias known as Anti-Balaka.
Adding their voices to the global calls for peace at the UN, two renowned singers called for an end to violence in CAR. The Senegal star and one-time Minister, Youssou N’Dour, and the Central African singer Idylle Mamba, respectively Muslim and Christian artists, promote a message of peace and tolerance in a single titled “One Africa,” which they sing as a duet.
“From Dakar to Bangui, let’s be proud and strong for Africa. Let’s come out from darkness and celebrate peace in music,” said the duo, who say religion is not a source of division but a source of richness.

“Youssou had the idea to do this song, and he called on me to join him, as I was already committed to message for my country” Idylle Bamba explained to World Watch Monitor.

She then joined N’Dour in Senegal in January to record their single.

Idylle Mamba denounces the exploitation of the crisis for political purposes.

”It is important for Central African citizens to understand this aberration and put an end to the violence. We have always lived together and there is no reason to make things change from one day to another”.

”There is a phrase in our song that says: “May peace transform our lives into gold”.  And we must repeat this every day, because there is nothing more important than peace. This is all we hope: live together in peace.

I really hope that Central African citizens will understand that we have reached the limit with this last [Djotodia] coup. I hope we will become aware of this situation, all the deaths we have had there, all displaced people living in refugee camps and say: this never happens again, never again”.

Youngest of 16 children, Idylle Mamba grew up in a musical environment in the shadow of her mother, a church chorister in Bangui, the capital.

”My mother used to bring us with her into our church choir” she recalls. At home, we spent time singing Christian music. Thus, little by little the desire to sing started. I think my faith has played a key role in my career. I am a Christian and I’m not afraid to say it”.

On March 10, many African artists held a concert in Paris to show their solidarity for CAR. This was an opportunity for the duo Mamba and N’Dour to perform their single One Africa. Click here to listen.