The death toll following a massacre across three villages in central Nigeria a week ago has risen beyond 150, according to the deputy Chairman of the Kaura Local Government Area in Southern Kaduna. 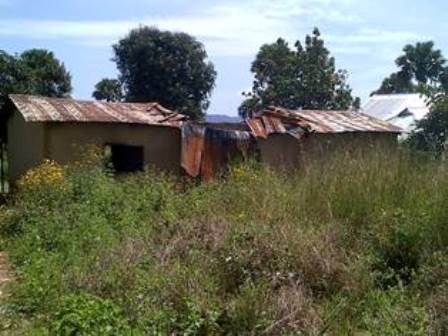 240 houses were set ablaze, alongside three churches, one ECWA (Evangelical Church Winning All) and two Anglican. The wife and three children of the pastor of the ECWA Church, Rev Likita Riku were killed, and burnt beyond recognition.

On Tuesday, March 18, our reporter visited the area: three days after the massacre, he saw that the survivors were still highly traumatized. The affected villages, comprised of mainly farmers and small scale traders, were deserted (an undermined number of food stores were also looted). Dozens of those affected were sleeping in a primary school, some of them were with relatives in nearby areas.

Meanwhile hundreds of relatives and sympathizers arrived to commiserate with survivors. The ECWA pastor was still in a state of total shock, unable to speak to other relatives and a number of church officials who came to try to support him.

Surviving children, who were still crying, asked where their parents, brothers, sisters and friends were: many were hacked to death.

Explaining how the killings occurred, a survivor, Emmanuel Tonak, said, “We were fast asleep when we heard gun shots and chanting of ‘Allahu akbar’ [God is great]. Suddenly we came out and saw them advancing and some houses in flames. They came around 11 pm. I escaped into the forest, when they came I started hearing cries and gun shots.”

NEMA has registered about 2,000 people displaced by the attack: its Zonal Coordinator Alhaji Musa Ilallah acknowledged that more may be needed, due to the scale of destruction.

“Although the materials may not be sufficient, we urge the people to accept them and to try to embrace the spirit of forgiveness and love one another.”

Attacks carried out by Fulani herdsmen in central Nigeria have reached an unprecedented level this year. (About 35 people were killed and a Catholic Church was attacked by Fulani armed men in several villages last Sunday afternoon 16th Feb in Taraba State, on Nigeria’s eastern border).

Some analysts point to the use of guerrilla warfare tactics, aimed at wiping out an entire community. Women and children were clearly attacked, and in some cases prominent families – such as community or religious leaders – were targeted.

The Kaduna State Governor, Mukhtar Ramalan Yero, who was on his way to United States to address an audience on peace and security, cut short his trip to return to Nigeria. He vowed to bring the perpetrators to justice but he didn’t explain how.

“We pray that God should expose the people that are causing this problem. We pray that God should touch their hearts to stop such dastardly acts or destroy their evil machinations. We must not despair under these brazen attacks. As a leader, I am not happy with such ugly situations because it is my responsibility to ensure security and safety for the entire people of the State.”

The Secretary of the Kaduna State Chapter of the Christian Association of Nigeria (CAN) Rev. Sunday Ibrahim, has condemned the massacre.

“The killing is barbaric and unjustifiable. We are mourning and condemn in strong terms these serial killings. As Christians we are not preaching violence, but urging the government and security agencies to rise up and face the reality of things. It is clear they have religious motives and the government must protect our people’s religious freedom to the letter.”

The security forces were accused of being slow to intervene, leaving enough time for the assailants to withdraw. According to survivors, the attackers have vowed to come back. Despite heavy security reinforcements, the prospect of further violence seems high.