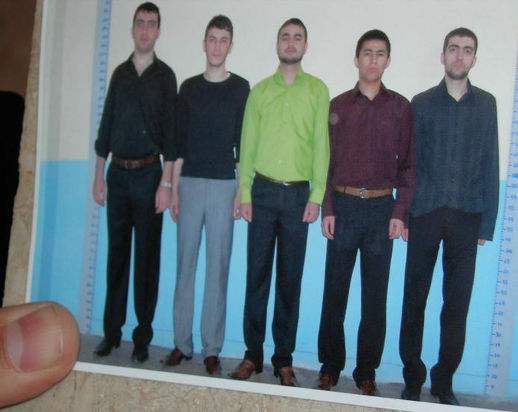 A 2008 snapshot of the five Malayta murder suspects.World Watch Monitor

Five Turkish murder suspects on trial for torturing and killing three Christians in Malatya nearly seven years ago are expected to be set free on bail within the next few days, before the conclusion of their trial in southeast Turkey.

Under a new judicial package passed by the Turkish Parliament on Feb. 21, the detention limit for suspects on trial who have not yet been convicted was reduced from 10 to five years. Once the proposed laws are approved by the Turkish President and published in the Official Gazette– expected at the latest by March 7– the five Malatya suspects would be eligible for immediate release.

Susanne Geske, widow of the German victim Tilmann Geske, admitted that “the thought of meeting one of these men downtown, or at the mall” until the trial is concluded was something she and her children still living in Malatya would “have to get used to”.

Because the suspects face a life sentence for deadly assault, the likelihood that they will flee the country “is very high”, Umut Sahin announced in a written statement from the Association of Protestant Churches in Turkey. Although Sahin told World Watch Monitor that the lawyers representing the victims’ families have requested that the five suspects be fitted with electronic tracking devices when released, he said any formal conditions of their bail would be decided by the court.

“But even that is unclear, as to what court that will be,” Sahin admitted, since the same legal package has also abolished the Special Authorized Courts under which the Malatya suspects were being tried.

During the past four years, some 20,000 military personnel, members of the Kurdish party, journalists and a variety of activists were convicted in these special anti-terrorism courts of planning alleged coup attempts against the ruling Justice and Development Party government.

Once the special courts are dissolved, the Malatya case will be moved into the normal criminal court system, with the likelihood that the current judges and prosecutors would be changed. Practically speaking, that would require the new officials assigned to the case to go through more than 100,000 pages of documents submitted during the trial’s 92 hearings to date.

“So the whole process could last some more years,” said Geske, who told World Watch Monitor that she hoped the case would be left with the current judicial officials and finished soon.

“It’s the law now,” she said, “so we can’t really do anything about it,” referring to both the changed court status and the pending release of the murder suspects. “We’re fine, and my kids are doing well. Some in our church here are really upset. But God can do miracles, so we are praying that the judges and prosecutor will not be changed. And we will keep on loving our enemies.”

During the last Malatya court hearing on Feb. 24, defense lawyers tried for two hours to block the reading of the prosecutor’s final appeal for sentencing of the accused killers and perpetrators, demanding that this be postponed until the new law went into effect.

But Presiding Judge Hayrettin Kisa, who has declared his firm intention to conclude the case by June, denied the defense’s request.

In addition, the state requested that one suspect who had turned state’s evidence be judged according to the Active Repentance Law, and that two accused accomplices who were never detained be acquitted.

The prosecution summation cited evidence that the Malatya murders were clearly linked to the previous assassinations of two other Christians in Turkey: Armenian journalist Hrant Dink on January 2007 in front of his Agos newspaper office in Istanbul, and Italian Catholic priest Andrea Santoro while kneeling at the altar of his Trabzon church on February 2006. Links were cited to the JITEM and TUSHAD units, allegedly formed illegally within various Turkish military forces to create disinformation and eliminate enemies of the state.

When the Malatya case is set to reconvene on April 10, the defense will be allowed a final statement. A subsequent hearing is expected to be scheduled for the verdicts to be announced.

Dubbed the “Malatya Massacre” by the Turkish press, the vicious murders of Turkish Christians Necati Aydin and Ugur Yuksel and German Christian Tilmann Geske in the Malatya offices of Zirve Christian Publishing on April 18, 2007 shocked the nation. The drawn-out trial against the suspected killers, who were arrested at the scene, began six months later.