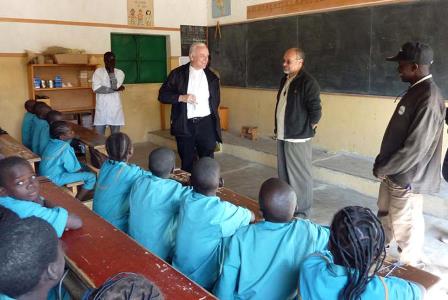 The two priests Giampaolo Marta, 47, and Gianantonio Allegri, 57, in a classroom.Courtesy of Vicenza Diocese, Italy

A Canadian nun and two Italian priests have been kidnapped by armed men in northern Cameroon, a region which serves as a base for Nigeria’s radical Islamist group Boko Haram.

The Canadian nun, Gilberte Bussiere, 75, has been in Cameroon for nearly 40 years. The two priests were identified as Giampaolo Marta, 47, and Gianantonio Allegri, 57, from the diocese of Vicenza in the northeast of Italy. According to local sources, Father Marta has been in Cameroon for 10 years, while Allegri had returned to the country in September after working there in the 1990s. They’ve all been involved in social development, especially in education.

The three clerics were taken hostage on the night of 4 April after a group of armed men stormed their small parish in Tchéré, 18 km from the Diocese of Maroua – Mokolo, and ransacked church buildings before heading toward Mora, near the Nigeria border.

Since then, security forces have engaged in a search operation with helicopters, but there is still no news regarding the clerics. On Saturday, Cameroon’s Defence Minister Edgard Alain Mebe Ngo’o, visited the area and expressed the government’s solidarity with the affected community.

During Sunday services, dismay and sadness were high among the worshippers, said Father Henri Djonyang, Vicar General of the Diocese of Maroua.

”What happened leaves us speechless. Why do peaceful people working for the wellbeing of the population get kidnapped?” he told World Watch Monitor, as his voice barely concealed his indignation.

”We knew they [militants] could act at anytime and anywhere, because they live among us and some even have dual nationality. But we did not feel particularly targeted.”

The identity of the captors has not been confirmed but all eyes are on Nigeria’s Boko Haram which has been responsible for a number of abductions in Northern Cameroun. In November, the French priest Georges Vandenbeusch was abducted, taken to Nigeria and then freed at the end of last year. In February 2013, seven members of a French family, including four children, were kidnapped by Boko Haram following a visit to the Waza National Park near Lake Chad. The Moulin-Fournier family was released after two months.

The resurgence of attacks has created a climate of anxiety among the population, says Fr. Djonyang.

”Our Muslim neighbors have expressed their compassion and sympathy towards us. Many say they fear that a scenario similar to that affecting their immediate neighbors, Nigeria and the Central African Republic (CAR), could happen in Northern Cameroon”

On March 20, the Cameroon authorities pledged to deploy 700 soldiers to its northern territory as part of a regional force which includes Niger, Nigeria, Chad, CAR and Libya to tackle Boko Haram insurgency and other related security issues in the region. Despite these efforts, some analysts claim Cameroon is the weakest link in the fight against Boko Haram.

This is partly because the far-north region of Cameroon is a vast semi-desert area composed of three provinces (Adamawa, North and Far North), bordered by Nigeria, Chad and Central African Republic. Due to terrorist threats and the risk of kidnapping, Westerners are advised against all travel in the region.

Deadly attacks by Boko Haram as well as Nigeria’s military response have resulted in thousands becoming refugees in neighbouring Niger and Cameroon. A local human rights organisation says Cameroon’s far north region has become a base for Islamist militants.

“Some Nigerian refugees have been granted Cameroon National Identity with the complicity of local officials. Many suspected militants are officially Cameroon nationals, which allows them to move freely in Cameroon after carrying out attacks in Nigeria,” Emmanuel Momo, President of Cameroon Human Rights Monitoring, told World Watch Monitor.

Momo went onto say that Cameroon’s security response is inefficient and has failed.

“How can one explain the apparent silence of authorities of the Mora district last November, when Boko Haram has distributed letters threatening to kidnap?” said Momo. “Considering the fact that the French priest was kidnapped by a convoy of 18 motorbikes carrying heavily armed men, riding openly on a main road before midnight, one should ask where Cameroon security forces have been at that time.”

Nigeria had openly accused its eastern neighbour, Cameroon, of not co-operating by failing to allow cross-border pursuits of Boko Haram members. In efforts to block the movement of insurgents, Nigeria closed part of its 1,600 km border with Cameroon in February.