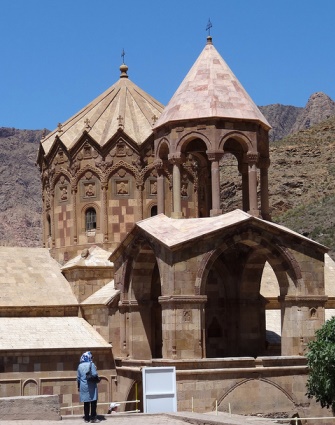 It’s officially the first week of a New Year for the Persian-speaking world who have just finished celebrating Nowruz.

With the Iranian new year some ‘new’ things have already happened for the Islamic Republic. Most notably Austrian President Heinz Fischer has accepted an invitation to visit Iran. No date has been set but this would be the first trip by a Western head of state in many years, as none have visited Iran under either of the current Iranian President Rouhani’s predecessors – Mohammad Khatami and Mahmoud Ahmadinejad.

Despite ‘Western-friendly’ appearances, the recent election of Mr. Rouhani has not contributed to a decrease in the injustices that many citizens of Iran, primarily non-Muslims, continue to suffer.

Another ‘new’ event concerns the dual British/Iranian citizen Roya Nobakht, who was arrested in October 2013 for saying Iran is ‘too Islamic’ on Facebook. Nobakht is making the news this week as she has officially been charged with “insulting Islamic sanctities”, a crime which can be punishable by death.

Experts who follow what’s happening in Iran continue to be outraged at the country’s list of human rights abuses, especially of Christians and other minorities.

While most cases involving Christians are tried in Revolutionary courts for ‘national security’ crimes, the report highlights that some Christians face charges in public criminal courts for manifestation of religious beliefs; for example, a court sentenced four Christians to 80 lashes each for drinking wine during communion in October 2013.

As of January 2014 at least 49 Christians were being detained and in 2013 alone, the authorities arrested at least 42 Christians, of whom 35 were convicted for participation in informal “house churches”, association with churches outside of Iran, perceived or real evangelical activity, and other standard Christian activities.

Sentences range from one to 10 years of imprisonment.

Since the 2010 October speech of Ayatollah Ali Khamenei in which he said that there is a fight against “the enemies of Islam (who) establish and encourage the expansion of Christianity in Iran” the Iranian government has consistently increased restrictions against people who convert from Islam to Christianity. Considering what has happened in the reported period, recent pressure on Christians appears to confirm this.

St. Peter’s Presbyterian Church in Tehran, was added in December 2013 to the expanding list of churches where Farsi-speaking Christians are not allowed either to participate in services or to enter the premises. Earlier the Ministry of Intelligence had asked members of St. Peter Church to submit their ID cards and personal information to the ministry. This was probably done to intimidate church members and keep them from attending church services. Also in August 2013 St. Abraham’s Catholic Church in Tehran announced that all Farsi-speaking Christians would be prohibited from attending services in compliance with government demands. In June 2013 the church had been ordered to submit copies of members’ ID cards.

Several pastors of established (Armenian, Assyrian) Churches who were subjected to restriction before October 2013 have been further pressured by the government through intimidation and interrogations to ‘encourage’ them to stop their activities and leave the country.

Pressure to keep Muslim background believers out of “traditional” churches has resulted in a thriving, yet vulnerable, house church movement.

House churches can be attacked by using spies. In one case a ‘pastor’ proved to be a secret police officer who interrogated former house church members.

House church leaders and their members are threatened by raiding their house church meetings, especially over Christmas. Leaders or active members have been arrested; including at least 16 Muslim background believers during the period covered by the U.N.’s report. Materials, books and DVDs have been confiscated. Believers have been beaten. Some have been taken to undisclosed locations and their whereabouts have been difficult to trace. Family members seeking to discover the location of arrested believers have been threatened to keep quiet. When asked about the conditions of believers thought to have been held in Evin prison, authorities have refused to provide answers in some cases and dismissed concerned relatives. While one pastor was detained in prison, his house was raided in December 2013. His wife and children were threatened by security forces, and a laptop and Christian materials were taken away.

Some of those imprisoned are kept for a long time, and are refused necessary medical treatment. In the case of Saeed Abedini, the imprisoned American-Iranian pastor, it was reported that he was taken to hospital while EU High Representative Catherine Ashton was on an official visit to Iran, but he failed to receive adequate treatment.

Apparently, even a long-established tradition of allowing long-term prisoners home for Nowruz, leave for two weeks (akin to allowing them out to spend Christmas at home) has been arbitrarily applied.