For the missing Nigerian girls kidnapped over 100 days ago, another trauma has emerged. Eleven of the group of grieving parents have died, many of them after heart attacks and stress-related illnesses. Some reports said that at least four fathers’ bodies were among those brought into the town of Chibok after the latest Boko Haram attack last weekend. But other local reliable sources have told World Watch Monitor that they have no evidence of this. It’s not impossible that all 11 may have died as a result of stress and trauma-related conditions connected to their daughters’ kidnapping.

Nigeria’s President Goodluck Jonathan again pledged to secure the release of the school girls kidnapped in April by Boko Haram during his long-postponed first meeting with the remaining parents, which finally took place on Tuesday. The parents had pulled out of a meeting last week amid accusations they were being used for political reasons.

On 14 April more than 200 school girls were abducted from their boarding school in the north-eastern town of Chibok in Borno state by Boko Haram. It sparked a global campaign, #BringbackOurGirls, aimed at securing their release.

But despite this global mobilisation and the support of countries like the USA, France and the UK, the whereabouts of more than 200 girls is still unknown. Some believe the Chibok girls are held in the Sambisa forest near Nigeria’s border with Cameroon, where the insurgents have set up camps.

The Nigerian President has been criticized for handling the crisis badly. For weeks he failed to comment on the abduction. His visit to Chibok, where the girls were kidnapped, was first announced by local media on 17 May, before later being cancelled.

Dr Pogu Bitrus, one of the most vocal Chibok community leaders, presented the community’s address to President Jonathan.

Just minutes after their meeting ended, he told World Watch Monitor that it was ‘a free talk’ that allowed parents and relatives of kidnapped girls to express their feelings. It was also an ’emotional’ moment with many people from the community weeping, including staff from the girls’ school, he said.

He stressed that the government must make it a priority to assure security in the Chibok area, since some girls’ parents have already lost they lives.

Speaking on the phone from Nigeria’s capital Abuja, hundreds of miles from Chibok, Dr Bitrus reported ”(As far as I know, at least) three parents have died from related heart attacks resulting from the shock they have sustained from which they never recovered. Then four others were killed in subsequent Boko Haram attacks in the area making a total of number of at least seven. Others are in very serious need of medical and psychological help.”

“We are not aloof” claims Nigerian President

More than three months after the kidnapping, President Jonathan tried to reassure the parents and relatives, and appealed for their patience, understanding and cooperation.

“Anyone who gives you the impression that we are aloof and that we are not doing what we are supposed to do to get the girls out is not being truthful,” he said.

“Our commitment is not just to get the girls out; it is also to rout Boko Haram completely from Nigeria. But we are very, very mindful of the safety of the girls. We want to return them all alive to their parents. If they are killed in any rescue effort, then we have achieved nothing,” President Jonathan told the parents and community leaders. 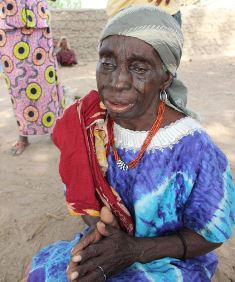 Grandmother of
two of the
Chibok girls.Hassan John

Some 200 people, including 51 of the girls who had managed to escape Boko Haram’s captivity, attended the meeting held in the Presidential palace in Abuja.

President Jonathan promised to do “everything humanly possible” to get the girls out without giving any specific detail.

“Our duty now is to take all relevant steps to recover our girls alive and our primary interest is getting them out as safely as possible.”

”For now we have no reasons to say he isn’t sincere. All we have to do is wait and see how that sincerity will translate into a real chance to rescue the girls. So let’s wait and see what strategy he is going to take.”

Responding to Jonathan’s promise to assure security in the Chibok area, Dr Bitrus expressed his anger and dissatisfaction towards the military deployed in the affected areas.

”So far, what we know is the military has not been pro-active on the issue,” said Dr Bitrus. “They only sit down and wait for Boko Haram to attack, rather than taking the fight to Boko Haram and routing them out. The military has the capacity to do it. Unfortunately, for whatever reason, nothing is happening.

Since the April kidnapping Islamist insurgents have intensified their attacks on Chibok and neighbouring communities. Last weekend Boko Haram took control of Damboa town, 85km from Maiduguri, the capital of Borno State. According to local sources assailants set fire to number of properties and the market.

Officials from the National Emergency Management Agency were struggling to establish a death toll. Multiple reports said that Boko Haram fighters were still occupying the town after hoisting their flag above a public building.

More than 15,000 people have fled Damboa to escape the Boko Haram onslaught, raising the fear of a humanitarian disaster in the region.

Today, Thursday 24th July, three regional governments – Niger, Cameroon and Chad have said that they will contribute 700 troops each to a combined regional force to fight the Boko Haram crisis that now spreads across their borders too, causing a spreading crisis of refugees there too.

According to Human Rights Watch, more than 2,000 people have been killed in the past six months compared to 3,600 killed during the previous four years of the Boko Haram insurgency.