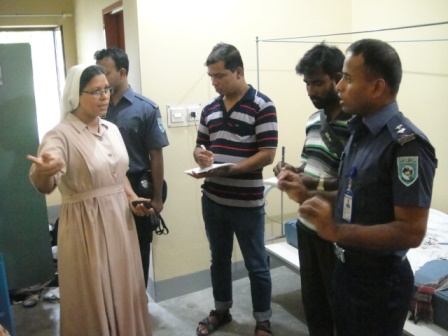 Bangladeshi nun describes the attack to the police.© Diocese of Dinajpur/Aid to the Church in Need

A mob of about 60 people armed with machetes, knives and iron rods raided a Catholic convent and beat up its nuns and priest – the Catholic mission in Rangpur district, 280 kilometers northwest of Bangladesh’s capital city Dhaka. The attack was said to be the first attack of this kind in the country, according to the Bishop of the local diocese Dinajpur, Sebastian Tudu: “It‘s unprecedented because nuns are highly respected in Bangladesh. The attack is obviously a targeted and planned attempt at intimidation.

The July 7 attack including attempted rape and looting began around 2am and lasted for nearly two hours; consequently the incident led to multiple protests by thousands of Christians across the country.

Speaking with World Watch Monitor, Father Anthony Sen, Secretary of the Justice and Peace Commission in the Catholic diocese of Dinajpur, said the assailants of Boldi Pukur Catholic mission had ulterior motives including the seizure of the church’s land.

According to UN-funded IRIN, a humanitarian news and analysis service, attacks on Bangladeshi minorities’ property is increasingly common and ‘it is not clear whether Islamist politics is behind the violence, or whether bandits are taking advantage of political instability to seize land and other assets from vulnerable groups.’

Of Bangladesh’s 154 million people, Sunni Muslims constitute 90% and Hindus 9%, according to the 2001 census. The remaining 1% are mainly Christian and Buddhist.

“One of the major reasons for the attacks is occupying land and assets. If repeated attacks take place, Hindus [or any religious minority group] will migrate and this will help local [lawbreakers] to occupy the land,” Rana Dasgupta the general secretary of the Bangladesh Hindu Buddhist Christian Unity Council, told IRIN.

After a primary investigation, police found that a robbery had been committed in the convent but denied the allegation by clergy that the raid was a planned attack by local Muslims over a land dispute.

“Three teams perpetrated the robbery. We have arrested one team [12 people] so far. Our initial interrogation yielded that robbery was their motive,” said Islam. Of the twelve, ten are Muslims and two are local tribespeople.

However Father Sen still isn’t convinced: “One of the robbers asked the nuns, while beating [them], about the documents of the case regarding a current land dispute between the church and a local influential political leader.” (The Church donated a piece of land to a school run by Muslims near the church. But the local political leader has tried to illegally occupy more of the church’s land).

“The robber also asked where the Father and the nuns get money to continue the case regarding the land dispute,” said Sen.

The authority of the Catholic mission filed a robbery case in the nearby police, without reporting any names.

The Bishop of Dinajpur Sebastian Tudu said: “The most recent attack is clearly a targeted response to Catholics’ commitment to the country’s poorest people.”

Details of the attack

The robbers first entered the priest’s house. After tying him up and beating him they proceeded to vandalize his home and steal his valuables.

Next they went to the medical house, inside the mission compound, where they beat a nun for information about the other nuns, and details regarding the location of the convent.

After vandalizing the convent they proceeded to beat up, and then to attempt to rape the nuns. In total there were seven nuns on location, of which three were beaten while the others managed to hide.

“The attackers tried to rape the nuns, but the women were saved by the grace of God. Their attempts to desecrate the vow of chastity of nuns for greater humanity and the service of God are shameful for us,” said Sen.

“When local influential people try to illegally occupy the land of poor tribal Christians, the priest and nuns make a stand against it. So the attack could be planned to intimidate the Father and the nuns because of their having recourse to the poor people,” said Sen.

Formerly East Pakistan, Bangladesh was established in 1971. After 15 years under military rule, democracy was restored in 1990.

Despite a constitution that provides religious freedom, Bangladesh is officially an Islamic state. However, unlike neighboring Pakistan, the country does not struggle with blasphemy laws or any anti-conversion bills. Even with the nation’s current democratic liberties, Islamist extremist groups continue to try to modify the constitution and establish Shariah law.

According to the World Watch List, compiled by global ministry Open Doors, which works amongst minority Christians, Bangladesh ranks at number 48 on a list of the top 50 countries where Christians are most under pressure for their faith. The main source of persecution is Islamic extremism. 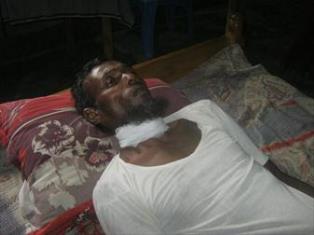 Sattar Miah, a Christian who was formerly Muslim, was attacked after a group of seven Muslims broke into his family’s house in the early hours of June 29 in North Bangladesh: Manmath, Gaibandha District.

An Open Doors’ worker who cannot be named due to security told World Watch Monitor, “One of the attackers stepped onto Sattar’s neck and was about to slit his throat with a dagger when his family began screaming, which alerted the neighbors, so that Sattar was rescued in time.”

“They came with rods and daggers. They looted the house. When Sattar tried to stop them, they overpowered him and beat him,” said the Open Doors worker.

Two months prior to the attack, Sattar Miah and 39 other Christians, who had also previously been Muslim, filed a complaint for the religious pressure they had been receiving from the village’s Muslims.

“For the past two years, these MBBs have been living under threat,” said Open Doors’ worker. “They are cut off from the community relations, kicked out of their work, and their children are maltreated in schools, but still they continue to stand firm in their faith in Jesus Christ.”

Political tensions have spilled over into violence

The beginning of 2014 saw continuing violence and Human Rights Watch (HRW) said Bangladesh had “tumbled backward on human rights”. In its recent report, HRW said nearly 200 people were killed and thousands more were injured in violent street protests in 2013.

In addition to Bangladesh being criticised for its human rights record, another concern regards the treatment of the nation’s women and allegations that police use torture against those in custody.