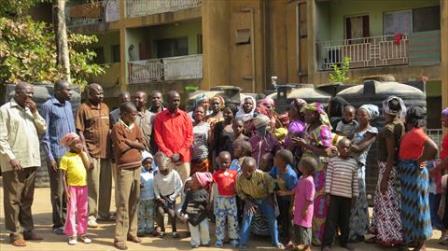 Nigeria’s radical Islamist sect, responsible for the kidnapping of nearly 300 girls in Chibok in April, appears relentless in its fight for the establishment of an Islamic state in Africa’s most populous country. Boko Haram’s leader Abubakar Shekau has announced, in a recent online video, the establishment of an Islamic caliphate in the towns and villages it has seized in north-eastern Nigeria.

The insurgents have raised their flags over Damboa and Gwoza in Borno State, and two weeks later, over Buni Yadi in neighbouring Yobe state. Boko Haram also is trying to claim Madagali in a third state, Adamawa, near the border with Cameroon. Hundreds of sect members attacked the Madagali army base before taking over the town. They also attacked the nearby villages of Sabongari and Kafin Hausa.

Boko Haram withdrew from Madagali on Aug. 25, after holding the town for 24 hours. Nonetheless, the offensive caused widespread displacement of the mostly Christian residents and others from surrounding villages who were taking refuge in Madagali. Most have made their way to Mubi, about 80 kilometres away, itself the victim of a serious Boko Haram attack in October 2012.

Also on Aug. 25, insurgents attacked the border towns of Gamboru Ngala and Banki. The fighting forced thousands of civilians to flee across the Cameroon border.

The Nigerian army, often outgunned and regularly criticized for ineffectiveness against the insurgency, has failed to stop the militants. Hundreds of soldiers have fled to neighbouring Cameroon.

More than 178 churches were destroyed around Gwoza, says a worker for Open Doors International, which works to support Christians who are pressured because of their faith. In a telephone interview, a local Christian worker said “the situation is becoming out of hand. The church can no longer support the large population of refugees from different parts of the northeast trooping to Mubi.”

The Director of Social Communications of the Catholic Diocese of Maiduguri (which covers Borno, Yobe and Adamawa states) Rev. Fr. Gideon Obasogie, told journalists on Thursday 29th August that “dozens have been killed and church structures have been burnt down. Christians in the town are in great persecution. Christian men were caught and beheaded, the women were forced to become Muslims and were taken as wives to the terrorists. The houses of Christians that have fled are now occupied by the Haramists. Their cars are used by the terrorists. Some Boko Haram sympathizers around the town showed the terrorists which were Christian homes, and Christians hiding were also identified and killed. Strict Sharia Law has been promulgated, as observed by a woman who luckily escaped from the death zone”.

A local church leader said, over the phone, “Only God can come to our aid – we are in a very difficult situation.” 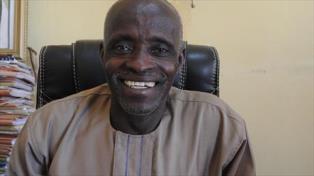 Rev. Samuel Dali is the President of the Church of the Brethren in Nigeria, known locally as Ekklesiyar Yan’uwa a Nigeria, or EYN Church. Located mainly in northeast Nigeria, EYN Church has been a direct target of Boko Haram attacks; most of the Chibok girls’ families belong to the Church. Unless put down, he told World Watch Monitor, the Islamist insurgency “will lead to certain humanitarian disaster, and the future of the church in the whole area is threatened.” World Watch Monitor’s Illia Djadi met with Dali recently. Here is an edited transcript of their conversation:

ID: How would you assess or describe the situation on the ground?

SD: Most of the communities are refugees, squatting with their brothers and other members of the church or living in places they even didn’t know before. In Gwoza area, the whole population has fled into Cameroon, or into other neighbouring Nigerian states like Adamawa or Taraba. They have lost almost everything. The rainy season has started but people cannot go to their farms, so you can easily imagine the outcome. The coming months are going to be worse than the present because since they have nothing left with them and they cannot go to their farms. Even if Boko Haram stopped attacking, it’s going to be a disaster for the communities this year. Actually most of the people are living with so little, just ‘from hand to mouth’. Thus being a refugee in their relatives’ house is even creating further problems for those people. So there will be definitely a famine in that area, unless miracles happen.

ID: From whom — or where — will these miracles come?

SD: Maybe from a loving human community who probably hear about the story and the plea of this people. The most important assistance the international community can provide is to help Nigeria to stop Boko Haram’s attacks, so that people can start a new life again. The international community can help the Nigerian government to identify the perpetrators of that violence and impose sanctions against them, notably by freezing their accounts and denying them visas. These can contribute to reduce the problem [evidence is emerging that Boko Haram has accomplices within high ranking politicians and the Army]. Of course it will be very helpful to assist people with materials like food and shelters. We have a relief committee in charge of distributing aid.

ID: What’s the impact of the crisis on your daily life?

SD: The crisis has created a distracting effect on our church, so that we are no longer thinking about our future plans. Initially, as a leader, I tried to create some programmes which aimed at promoting a better future for my Church. But as the crisis has intensified and is coming closer to every village, we don’t know when it is coming to our place. Every day, when we wake up, we thank God because we are still alive. Several times, the Relief Committee members planned to distribute materials to affected people, but as they are about to go, they hear that the area was attacked and they have to delay. The crisis doesn’t allow us to go through this kind of bureaucracy. Actually we have thousands of refugees in the premises of our Headquarters. The first time I came across hungry children begging for food, it made me very upset and I tried to avoid them. Some of them were naked. You see them going around and some times, if you give them food and water, they begin to play as they think things are normal. So, gradually I begin to come closer to them, trying to comfort their families. Most of the parents are women carrying these children because their men have disappeared. When I saw them like this, I say: for how long can these little children be running from one village to another?

ID: What are you expecting from churches worldwide?

SD: We want the Church worldwide to recognise that this is not just our problem. It is the problem of the whole body of Christ. Maybe they may have not known yet the intensity of the crisis we are going through. As a church, we initially totally depend on offerings from our members. But as they cannot hold services and they have lost almost everything, the whole church has lost its income. Actually we feel we have been left alone. That’s why we completely give it up to God and say: ‘God, here we are, do whatever you think is proper for your people here’. The situation is just getting bad every day and will eventually lead to a human disaster. The future of the church in that area is also threatened. Dozens of our churches have already been completely razed down and many pastors killed while others have fled along with their members. If the situation does not stop, there is a real danger of eliminating churches in North-eastern Nigeria.

According to the UN Office for Humanitarian Affairs: since May 2013 (when the Nigerian government declared a state of emergency in the States of Adamawa, Borno and Yobe) to date, more than 300,000 have been forced to flee the violence of Boko Haram.

The report – published jointly by the Internal Displaced Monitoring Centre (IDMC) and the Norwegian Refugee Council (NRC) – stated that the number of internally displaced people in Nigeria is approximately a third of the IDPs in Africa and 10 per cent of IDPs in the world.

According to the report, 470,500 people were displaced in Nigeria in 2013 alone, placing it as the country with the third highest number of displaced in the world. Nigeria is only ranked behind Syria with 6.5 million IDPs and Colombia with 5.7 million IDPs.

The Nigerian military reported that Boko Haram killed more than 1,500 people in the first three months of 2014 alone and more than half of those killed were civilians.