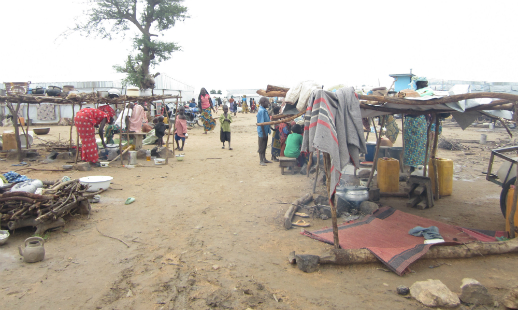 Northern Cameroon is more than ever in the sights of Boko Haram, as details of atrocities committed by the radical Islamic sect from neighboring Nigeria continue to emerge.

The militant sect, which now controls several major Nigerian towns, has set up a caliphate with a strict implementation of sharia law. A lawmaker told the BBC that dead bodies of civilians remained littered on the streets of Bama, a key town of Nigeria’s north-eastern Borno state – seized by Boko Haram this week. Christians in the occupied areas are being persecuted, it is reported. Christian men have been caught and beheaded while women have been forced to convert and been married to some of the militants.

Their offensive has forced thousands of civilians to flee into neighboring Cameroon. Making a mockery of the border (which the Cameroon authorities say they’ve closed to prevent the spread of the ebola virus) militants have intensified their attacks in Cameroon’s villages and towns. As in Nigeria, Christian populations are particularly targeted.

This is particularly true of the village of Cherif Moussary, where a church was ransacked and the residence of the pastor burned down. Many Christian families were stripped of their properties; ‘even kitchen utensils were not spared’ local sources told World Watch Monitor.

A similar act of desecration was reported at Mouldougoua village. At Assighassia (occupied for days by militants before being ousted by the army on Thursday, August 28) two church elders – Zerubbabel Tchamaya and Samuel Lada – were beheaded. In Djibrilli village, a pastor was kidnapped, threatened and asked about his faith by militants before being released the following day.

Everywhere the story is the same. A local community leader told World Watch Monitor “The assailants attack in the night, when the army is no longer patrolling in the villages. They enter the houses of Christians and strip them of their properties… Several churches were ransacked and valuables such as musical instruments were destroyed or taken away…

“The situation is alarming”, laments the leader, who has sheltered a number of the internally displaced. “It is difficult to give precise figures of Christians who have fled”.

In July, at least 25 people were killed in Cameroon, among them a church leader, as militants carried out two spectacular attacks in the region. The wife of the Deputy Prime Minister was kidnapped, raising the fear that northern Cameroon, long seen as a rear base for the militants, has become a new battle field for them. She was rescued two days later, after a fierce battle between her kidnappers and the army.

Since then, the Cameroon government has announced the reinforcement of the army in the region. Also several meetings have been held – aimed at pooling resources with neighbors – after the abduction in April of about 300 Chibok school girls by Islamists. On Wednesday, Nigeria and its regional allies called for greater international support to shut down Boko Haram’s weapons and funding supply, as concern has mounted at the group’s rapid recent land grab in North-Eastern Nigeria.

For months, the churches have been trying to contain the influx of Nigerian refugees and internally displaced people. The Council of Protestant Churches in the Far North region has set up a crisis committee, Rev. Samuel Heteck, one of the regional leaders, told World Watch Monitor.

”The action of our churches has initially consisted of providing the refugees and IDPs with food, shelter and medicines. But now, the capacity of our churches is overwhelmed, as their number has increased up to threefold”.

But in the meantime, cross-border raids and atrocities have continued, pushing more people to flee. ”Every week we welcome new waves of refugees coming from all sides. More than 9,600 displaced people were recorded in two weeks. Some are welcomed within church compounds and others in the UN Minawao refugee camp in Mokolo”, notes Rev. Heteck.

The Church in Cameroon alone cannot cope with the spiritual, physical and financial demands that can give a better life to the thousands of displaced people, points out Rev. Heteck.

”After more than a year of social action, we now face a depletion of our resources. Unfortunately, the help and generosity of our brethren from abroad has been slow to appear.”

Moreover, the deterioration of security has forced missionaries and expatriates, employed mainly in social work, to leave the area. Their departure has significantly reduced the response capacity of the churches, as local staffs were not prepared to face such a crisis.

Activities aimed at raising funds or generating momentum for prayer are held by local churches. A day of fundraising and voluntary donations is set for Sunday, October 19, in all Protestant churches in Cameroon.

On July 19, a day of prayer for peace was held by the Catholic Church. “We want to entrust Cameroon as well as all other countries in war to the Lord. The insecurity raging on our borders, in particular those with Nigeria, has created a psychosis in our population. In these situations, you must put yourself in the hands of the Almighty”, said the Archbishop of Douala and President of the Episcopal Conference, Samuel Kleda.

Conflict prevention activities are also held jointly between Christian and Muslim leaders in Northern Cameroon, fearful that their region may become another area of sectarian violence. About 40 Christian and Muslim leaders met in April to promote a culture of peace and tolerance between different religious communities, and this led to a Youth Forum on August 7 in Maroua.

Under the theme “Young Christians and Muslims together for peace and development”, it allowed local authorities to call young people to be ‘an agent of intelligence’ and to report any suspect activity. (Hundreds of young Cameroonians have reportedly joined the ranks of Boko Haram). In their closing statement, Christian and Muslim young people expressed their commitment ”to promote religious tolerance, to not give in to the bait of kidnappers and to remain faithful to the ideals of the Republic”.

Unlike the regions in its south, the Far North of Cameroon is a vast semi-desert, very poor area. Some  accuse successive political leaders of abandoning the north, which is in great need of basic infrastructure, and where banditry and all sorts of trafficking operations have developed. Over years, food production and farming have declined because of the scarcity of farmland and grazing areas.

The current influx of refugees has put further pressure on scarce natural resources. Additionally, the destruction of farms and livestock by Boko Haram militants has raised the prospect of widespread famine in the region. In July, the World Food Programme (WFP) started providing humanitarian assistance to Nigerian refugees in Cameroon, and it raised the alarm.

“Local authorities have done their best to help, but these refugees are in urgent need of food and assistance. We found alarming levels of malnutrition, particularly among children. This is a priority for the WFP and its humanitarian partners” said Jacques Roy, WFP Representative in Cameroon.

The arrival of the rainy season complicates further access to the areas: deadly flooding has been reported, and also an outbreak of cholera has claimed an undetermined number of lives.