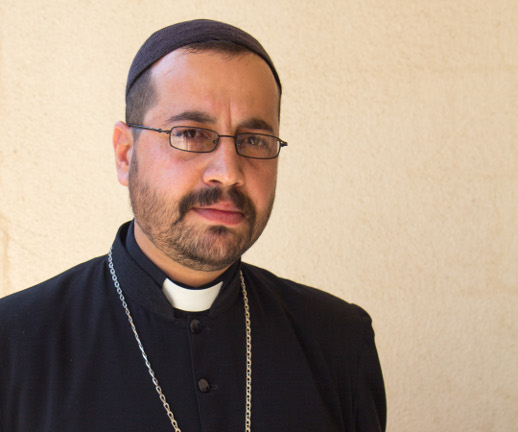 The last Christians have fled the northern Iraqi town of Bartella. Six babies were born during the difficult journey east to Erbil, a city under Kurdish control and still known to be safe for Christians.

The church group was led to safety by Father Yacoub Saad Shamas who explained what it felt like to leave their homes.

“It was a painful decision to make, to leave behind our homes, the place we grew up in, the place we love. Some church guards and I were the last Christians to leave our village. It took us 10 hours to get to Erbil. In my church group we had six babies born along the way. It was all very difficult.”

According to Father Yacoub, 2000 Christian families from the Syriac Orthodox community fled Bartella on 6 August. Six hundred went north to the Dohuk area, but the majority came to Erbil.

Sixty thousand Christians have arrived as refugees in Erbil since Islamic State began terrorising Christians in Mosul and the Ninevah Plains, according to local NGOs.

Like so many of the refugees, families from Father Yacoub’s church are spread around Erbil with many settled in Ankawa, one of its suburbs. Some of the refugees are staying with relatives while others are living in schools, church courtyards and public gardens.

Father Yacoub has lost his church but feels he must stay with the church families despite having an open visa to enter the United States, a country he’s visited twice before: “I feel responsible for my people. It is a hard time and we have to look out for each other.”

His group of refugees relied on the Church for food when they first arrived in Erbil but that soon ran out. “The Bishop of our Church, Mar Gregorius Saliba Shamoun, helped us, but our resources were so little. It was gone quickly.”

Up until their exile the Christians from Bartella could provide for themselves. Many owned houses and good agricultural land, which meant food was always available in the markets. But now they are completely dependent on others.

“We are very happy that now at least we can get basic supplies for our families,” Father Yacoub said. “But it is strange for us that we now have to ask church aid organizations to help us out. ”

The Bartella community has organized itself so that all the families have registered their names with Father Yacoub, who has negotiated to get help from partner NGOs. But he still struggles with distribution:  “It is too difficult for us to bring each bag personally to each of the families. We have a good person in the local community whose house we use to distribute the goods,” he said.

“We take the food there and we have a list of the families and call them up so that they can come and pick up the supplies.”

The bags that the Christian aid organization provides contain enough basic supplies for one family for one week, but no meat or fresh vegetables. Father Yacoub still feels it is an important contribution that is making a big difference: “I want to thank all those who are sending help for us in our time of need. We really need it!”

Father Yacoub is a busy man who still has services to take, as the church leader of the community he led to exile. He continues his duty of care for the community. Later in the day he has a funeral service to hold and he tries to visit the different families spread across the city.

“When I come to sit with them, at least they feel that the church has not forgotten them and that they are not alone. Jesus said that because they have persecuted him, they will persecute us. But he also said that although we face tribulation we can be sure that Christ has overcome the world.”

When asked what the international community can do to support him and others who want to stay in their native land, he becomes passionate: “Please pray; this is first. Without prayer we really cannot do, or begin or finish anything. But also please ask your leaders to help us, so we can return to our homes and to stay in Iraq.”