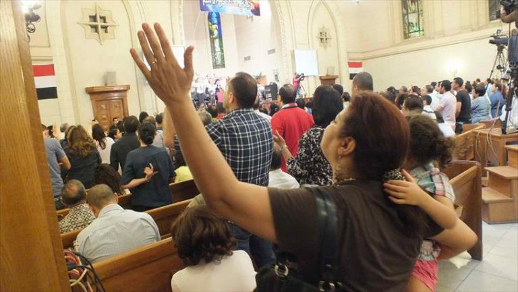 Members of Kasr el-Dobara church in Egypt, shown in 2012, have given generously to support refugees in Iraq.World Watch Monitor

As a coalition of Western and Arab countries continues military action to try to defeat Islamic State (IS), it’s timely to hear how the region’s largest Christian minority – in Egypt – is helping to provide humanitarian relief in Northern Iraq.

Coptic Christians themselves faced an onslaught from Islamic extremists only a year ago, but are now providing much-needed practical and psychological support to other Arab speakers in ways that Westerners cannot.

One of the biggest churches in the Arab world, Kasr el-Dobara church in Cairo, is delivering aid alongside agencies such as the UNHCR, Caritas and many others, thanks to its relatively well-paid and well-connected membership.

Revd Fawzi Khalil, director of relief ministries, has just returned from Erbil in the Kurdistan region of Iraq, where many of the 1.8 million Iraqis displaced since January, have settled.

His church has sent a delegation to Iraq every 10 days for the past two months, trying to stem the humanitarian tide. Its middle-to-upper class membership, which worships in a street behind the flashpoint Tahrir Square, has so far donated $180,000 to the effort. A fundraising trip to the United States added an additional $120,000. 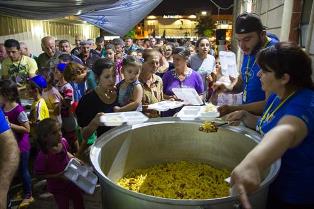 They have distributed 2,500 mattresses, along with pillows and blankets, and also 400 portable gas stoves that serve four families at a time. Most impressively, the church supports a network of 2,200 families that receive a food basket every two weeks.

This network is run in coordination with churches of Ankawa, a largely Christian neighborhood in Erbil. Around 90 per cent of recipients, however, are non-Christian, either Muslims also fleeing IS militants, or from the Yazidi minority.

Khalil explained that the majority Chaldean Catholic Church of Ankawa has done an excellent job of caring for Christian refugees. Erbil’s population includes roughly 160,000 Christians, and many have taken in their religious brethren.

As a consequence Erbil’s churches are packed. The refugee centre in the Mar Elia church grounds is home to 700 families. World Watch Monitor reported recently that the onsite kindergarten was managing to give schooling to all the camp’s infants.

Nearby Mar Yousef camp is in a church itself, and hosts mostly Muslims and Yazidis. Erbil has a permanent population of 1.5 million people. But according to UN-Iraq, the three established UN camps can host only eight percent of the refugees.

The rest are taken in by local families and churches, but thousands sleep on the streets, under bridges, or in partially completed buildings, said Khalil.

Khalil’s team has a wealth of stories collected from their visit. They spoke to dozens of individuals with similar stories, but names and faces begin to blend together.

A 60-year-old blind man from Nineveh told Khalil how he couldn’t return to his home. ‘I don’t want to go back to the same neighbors who betrayed me,’ he said. ‘They surrendered me to the terrorists.’

Soha is 22. She graduated from university and was looking forward to her new job in Mosul before the IS onslaught. Now she must care for her brother’s three children who have been separated from their mother.

‘Now, all I have is a mattress, a donated plate of food, and two pairs of clothing,’ she told Eva Boutros. ‘This is the end of my youth.’

Boutros is the director of volunteer ministry for Kasr el-Dobara, but accompanied a joint churches team organized by the Chaldean Church in Heliopolis, Cairo.

This team brought cash as well as tents, medical supplies, blankets, and children’s underwear that were donated by Egyptian companies.

But Boutros recognized many of the refugees needed something more, and took 280 young women, including Soha, shopping at the local mall.

‘It was fun for us, and fun for them,’ she said, describing a moment of happiness amid a desperate situation.

Perhaps her woman’s touch gives her greater memory for personal detail. But she praises a different source.

‘I remember each person, their face and their story,’ she said. ‘The Lord sent us to tell them ” we are suffering with you”‘ .

Kasr el-Dobara’s team included a professional psychiatrist, who spent hours counseling women and children through their trauma. Childcare specialists did their best to entertain the children each evening.

The empathy given to refugees in the churches is just one aspect of the care they receive. According to another member of Kasr el-Dobara in Erbil, Ehab el-Kharrat: ‘despite their difficult conditions these refugees have it better than anyone else’.

Kharrat, a former MP in the Egyptian Parliament, thinks the next most fortunate group of refugees are those taken in by Kurdish families, followed by those in unfinished buildings but under the sponsorship of church groups. Kasr el-Dobara’s efforts are toward this group, primarily.

But thousands of Iraqis remain on the streets and in underfunded UN campsites in the desert. Kharrat noticed most tents were recycled from an earlier Syrian refugee camp, and of deteriorating quality. 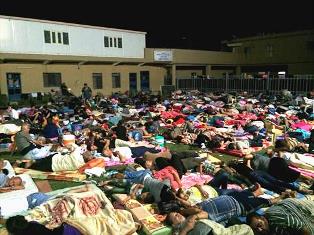 Thousands
who slept in
the church
yard in
Erbil in
August
will be
more
vulnerable
when
winter
temperatures
arrive.
World Watch Monitor

After speaking to Kurdish officials, he related their complaint that under the Maliki government, Baghdad failed to send Erbil its constitutionally guaranteed share of the budget. The new government, formed on 8 September, has promised to do so but not yet delivered, he said.

This has left the Kurdish regional government in a bind, the officials say. The UNHCR is a refugee agency, but those fleeing are technically considered Internally Displaced People (IDPs). With no agency possessing a clear mandate, the UN looks to the local government to lead.

Even so, the UN documents detail over 346,000 people who have been reached to some degree.

According to Boutros, however, the fact that Egyptian Christians have been present has made an impression on many.

‘Muslims and Yazidis appreciate very much that they are cared for,’ she said. ‘They know it is the church that is doing this in Iraq.’

But no one is able to do enough. If by December families are still living on the streets, the already tragic situation will turn catastrophic.

‘They survived the summer- the heat did not kill them – but the freezing snow might.’