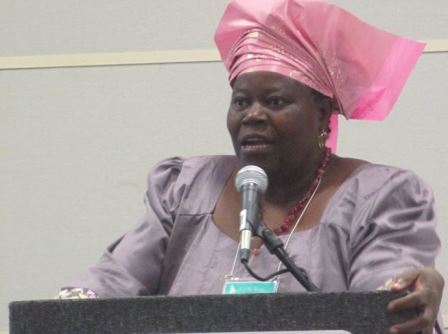 Dr Rebecca Dali is the founder of Centre for Caring, Empowerment and Peace Initiatives.Courtesy of CCEPI

Nigerian Rebecca Dali’s birthday is 1 October – the same date as her country’s Independence Day. But this year there was little time for celebration because her home town of Michika is overrun by Boko Haram.

Rebecca is the wife of Rev. Samuel Dali, President of the Church of the Brethren, the church attended by most of the 276 girls abducted by the Islamist group in April 2014, known as Ekklesiyar Yan’uwa a Nigeria, or EYN.

“Last year l celebrated my birthday with family and friends. My husband whispered ‘happy birthday my love’. He hugged me, gave me a gift, held my hand and prayed for me. My children hugged me and sang a birthday song.

“Lots of women, children and older people visited me. I met with friends and staff of the Centre for Caring, Empowerment and Peace Initiatives (CCEPI) to celebrate its launch – on my 50th birthday in 2010. I shared with them how l started this NGO in 1989, to help women and girls to become self-reliant. After a time of entertainment, we enjoyed a meal and prayed together.

“But this year, there is no time for celebration. Our joy’s turned into sadness because we’re homeless. My family are scattered in different places. My husband is in Abuja, some of our children are in Jos and others in Kaduna, while I am working to help displaced people in the North-East. We’ve registered more than 140,000 Internally Displaced People in Mubi, Hong, Gombi, Gere, Yola South, Yola North and Numan Local Government areas only”.

Recent weeks have seen an intensification of Boko Haram attacks in north-eastern Nigeria. About 25 towns and villages are now under Islamist control in the three states of Borno, Adamawa and Yobe, where the government has declared a ‘state of emergency’.

There was no mention of the fate of the Chibok girls, abducted almost six months ago in the government’s official speech on the nation’s 54th Independence Day.
Some 500 people staged a protest in Abuja to express their anger, accusing President Goodluck Jonathan of ”insensitivity” and failing his oath of office.

“He swore to protect the lives and security of Nigerians on 29th May, 2011. He held the Bible and the Constitution. Section 14 of that Constitution is very clear, that the security and welfare of the people will be the primary objective of government”, said Dino Melaye, one of the organisers of the demonstration. 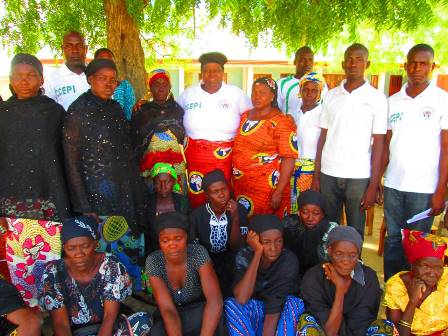 Dr Rebecca Dali (Middle) with some mothers of Chibok girls. May 6, 2014Courtesy of CCEPI

Rebecca muses on the day: “This year l did not have my green cloth around me. I used to wear green attire on my birthday. [Green is the main colour of Nigeria’s flag]. I cannot go to Michika; it’s been turned into a death zone for now. Maybe our house and our CCEPI office in Michika were looted or burnt down, with all the materials to be distributed to widows, whose husbands were killed by the insurgents. We bought sewing and knitting machines, foodstuffs, etc.

“The memories of the day militants attacked are still fresh in my mind. It was September 7, at around 9 to 10am. People were trapped: some in their churches, some in their homes, and more than 150 were killed. We didn’t have the comfort of burying them. Up to now, the bodies of our loved ones are littered on the street. In Michika women and children are not spared. A friend who managed to flee the town this week told me insurgents forced another friend Kwaji to witness the killing of her husband and 18 year old son.

“As in Michika, so elsewhere in Gwoza and Madagali Local Governments: they continue to sow death and destruction.

“In Madagali town, people were killed and some abducted. We have lost Pastor Ezra. One church leader, who was attacked while performing a burial ceremony, told me how he almost died. They shot to death many people including the 13 year old daughter of the deceased.

“He hid, but saw Boko Haram men vandalizing his property. He walked more than 50 miles before reaching a safe place. Unfortunately he’s had to leave his wife and children at the top of a nearby mountain.

The stories of people suffering are everywhere; the same in Borno, Yobe and Adamawa States. Lots of people have been killed, and an unknown number of properties destroyed.

EYN, which is essentially based in North-Eastern Nigeria, is the most affected Church. More than 10,000 people have lost their lives, more than a hundred churches have been burnt down.

“But the government doesn’t care. Even the money collected to help the victims has not reached the real victims. We need security more than anything. Nigeria should reclaim our motherland for us”.