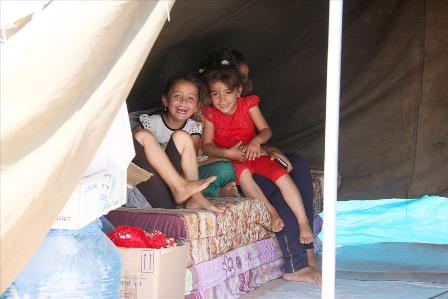 Iraqi Christian children
driven out of their homes by IS. Photo taken at a refugee camp in Erbil on September 16.World Watch Monitor

In recent history, genocides have often been accompanied by the preparatory dehumanization of victims.

In 1994, in Rwanda, for example, the Hutu interhamwe labelled the Tutsis as “termites” or “cockroaches” before they killed more than one million (mainly) Tutsis. Similarly, before World War II, the Nazi regime in Germany often featured illustrations of Jews in cartoons and other propaganda materials looking decrepit or sub-human, and forced Jews to wear yellow stars saying “Achtung Juden (Warning: a Jew).”

In other instances where many civilians died, such as in the predominantly Ibo breakaway region of “Biafra” in 1967, the term “kwari kwari (mosquitos)” was used to refer to the rebellious people, who suffered up to one-million deaths during the suppression of the rebellion.

Each generation, each region, and each group of victims has seen different terms and methods used

against them, but the one common factor behind all genocides or mass killings is that the victims are dehumanized before the violence can take place. One of the more recent challenges in preventing a possible next genocide or mass killing is that, for the first time in recent memory, the perpetrators of such attacks are using and citing religion to justify their violence.

From Boko Haram, to the Islamic State (IS) in Iraq and Syria, to the Taliban, to al-Qaeda in its global operations, the religious ideology to justify the kidnapping, killing and rape of tens of thousands of people is takfirism.

Etymology and Background of ‘Takfirism’

The word kafir in Arabic – incorporated into almost all languages that Muslims speak – translates most closely to “infidel” in English. Takfir is based on the root word kafir and most closely means the “act of labeling another person an infidel.” Takfirism therefore refers to the doctrine in Islam of labeling other people as infidels. Usually, the label is applied to those who are not Sunni Muslims. (Sunnis comprise more than 80% of Muslims around the world; they maintain that their religious belief and practice is truer than other sects, such as the Shi’a). However, also assumed under the concept of kafir in Islam are “apostates,” or those who have disassociated from their Muslim background and no longer consider themselves Muslims (in many cases, they have adopted Christianity or another religion). The doctrine of takfirism is broad enough to include the labeling of all non-Sunni Muslims as kafirs, therefore including those Muslim background believers who left their religion.

Since the U.S. and Allied war in Iraq in 2003, the doctrine of takfirism has been increasingly used to target Muslims who are perceived to collaborate with the U.S. and other “infidel” powers by, for example, enlisting in Iraqi security services, participating in democratic elections, or migrating to Iraq to work for companies involved with the U.S. forces. Abdul Basit, the pseudonym of a scholar for a Taliban media wing called ‘Neda ul‐Jihad’ (‘call of jihad’ in Arabic) even advocated that ordinary Muslims (who are not linked to the government or indeed to foreigners) are also kafir, simply on the basis that they did not actively participate in jihad.

The overwhelming majority of Islamic scholars (ulema) hold that the punishment for those who are kafir is, for individuals, the death penalty. But there is not consensus as to whether it is applicable to entire groups. In other words, one individual who leaves Islam for another religion, or becomes an atheist, would be subject to the death penalty, but if an entire group in a previous generation left Islam for another religious belief, such as the Bahais or the Ahmediyas, they as an entire group are no longer subject to be killed en masse.

This is nonetheless contradicted by the fact that whether or not their predecessors left Islam, in this life they are still seen as kafir for being non-Sunni Muslims and are therefore, according to the harshest of takfirists, subject to the death penalty.

An alternative to killing people labelled kafir is nonetheless available; namely if the kafir pays jizyah, or tax, to the Muslim rulers, then this will afford them “protection.” In recent years, takfirist organizations such as Boko Haram, the Islamic State and the Taliban have employed jizyah to pressure minorities, such as Christians, Shias or Sikhs, to pay them money for “protection”, or to justify rape and enslavement or expulsion – as justification or compensation in cases where such jizyah is not paid.

An issue of debate is whether takfirism is a spin-off of Salafism or a separate doctrine altogether. Salafism is an interpretation of Islam rooted in Saudi Arabia (there known as wahabbism) that calls for Islamic practice based on the ways of the salafs, or devout followers of the Prophet Muhammad in the 7th century. It is hostile toward mystical Sufism, and syncretic brands of Islam that combine elements of local tradition – and it allows followers to practise takfir.

The Syrian-born Spanish national and Al-Qaeda ideologue (with a focus on “jihad”) Abu Mus’ab al‐Suri, for example, argued that “some prominent men from the Salafi‐Jihadi wave, or at least those scholars…who followed them, offered interpretations which were either extremist, or were articulated in such a general manner that some ignorant jihadis took them a step further and widen[ened] the concept of takfirism“.

As a result of this, according to al-Suri, the difference between mainstream jihadism and takfirism has become so narrow that the two are nearly inseparable today.

(al-Suri is believed to have been captured by Pakistan and sent to Syria in 2011 and then either freed by President Bashar al-Assad at the start of the Syrian uprising in 2012, or is still in Syrian prison).

Others have argued that “the concept of global jihad and takfir” was developed on the basis of Egyptian Muslim Brotherhood founder Sayyid Qutb’s ideology, whose main notion was that the Muslim community (umma) was dead so long as it was not fighting to extend Sharia everywhere in the world.

Yet others argue that takfir is a “stepping stone” to engaging in violence against secular Muslim rulers, and those who are perceived to be supportive of those rulers, such as Christians, foreigners or those who participate in elections. Still others suggest that takfirism is merely a product of strictly textual interpretations from Islam itself, such as Qur’an (4:89), which says: [Infidels] wish that you should disbelieve as they disbelieve, and then you would be equal; therefore take not to yourselves friends of them, until they emigrate in the way of God; then, if they turn their backs, take them, and slay them wherever you find them; take not to yourselves any one of them as friend or helper.

Whatever the outcome of these debates, it is clear that almost all of the most violent actors in the global jihad, employ takfiri ideology. We need to understand this concept of ‘infidel’ to understand militant Islam.

Al Shabaab’s leaders, for example, state that Western citizens and their allies are ‘kuffar’ (plural of ‘kafir’ and that it is halal (lawful) to kill and rob non-Muslims. “Boko Haram similarly states “that we shall make the country ungovernable, kill and eliminate irresponsible political leaders of all leanings, hunt and gun down those who oppose the rule of Sharia in Nigeria and ensure that the kafir does not go unpunished”.

The Islamic State has forced Christians to leave their homes, burned their churches and raped or “forcibly married” Christian women, all in the name of takfirism.

As a result, it can be said that following takfirism is the means by which these jihadist groups justify their attacks on their enemies, who include anyone who is not a Sunni Muslim and possibly even Sunni Muslims who do not side with them. With Christians and other non-Sunni Muslims increasingly becoming the targets of murders en masse by takfirist groups, it raises the concern that the next mass genocide – or, more likely, religicide will be – or is already – being carried out by takfiris. It would appear that this doctrine and ideology must be confronted before the world experiences another “never again” moment. We need to understand this concept of kafir or ‘infidel’ to understand violent extremist tendencies infiltrating Muslim populations today.

One method of confronting the threat from takfirism is to prohibit speech and advocacy in support of this ideology because it infringes on the rights and well-being of others. This is especially imperative in countries where it is not yet so prevalent that the takfiris could launch their jihad in response, such as Central Asia or Europe. Some countries are likely already late in confronting the threat, while others are on the cusp of being too late, such as Cameroon, where Salafist-sponsored mosques and madrassahs emerged in the late 1980s and 1990s, which is about 10 years later than its neighbor, Nigeria, which is now struggling greatly with takfirism. It is important for governments and civil society to de-legitimize takfirist ideology.

Another key way to stop takfirism is through protecting freedom of religion. Since takfirism calls for the punishment of death to non-Sunni Muslims, it is inherently a violation of the freedom of religion. Any preacher that espouses such ideas would be subject to prohibition or bans. Thus far, it seems only in countries like Uzbekistan, Chad and Kazakhstan that the threat of takfirism being taken seriously, but these are the same countries that human rights groups often criticize most vehemently for violating religious rights, although they intend to protect their own religious identities and freedoms. This is an issue that requires further understanding, discussion and resolution.

The world must take notice of the doctrine of takfirism before it is too late. If any continent should recognize these signs, it should be Europe, given its history and understanding of how a small and seemingly marginal group of people can within a decade’s time manage to become extremely powerful. While history will not repeat itself the same way as in World War II, history does, in the words of Mark Twain, “rhyme,” and this is what we are seeing across the European, African, Middle Eastern, and Central Asian landscapes today.

(The author, an independent expert on radicalization, writes in a personal capacity; his report was originally commissioned by the World Watch Research Unit, Open Doors International, which works to support Christians under pressure for their faith worldwide)