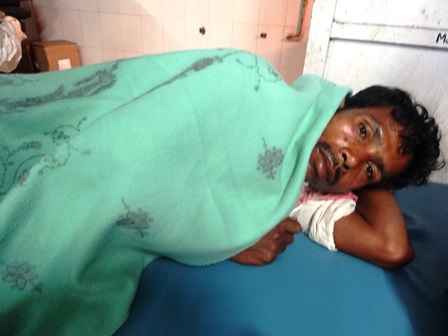 Scores of policemen are camping in a remote Indian village following an Oct. 25 attack on Christians by Hindu fundamentalists.

Government officials characterize the violence in Madhota village, in the Bastar district of Chhattisgarh state in central India, as a “clash between two communities.” Arun Pannalal, president of Chhattisgarh Christian Forum, calls it a “cleverly planned attack.”

That’s not the only point on which Pannalal and local officials disagree.

“Eleven of our people have been hospitalised. Eight of them have serious injuries,” Pannalal told World Watch Monitor on Oct. 29.

“Ten people were injured,” countered Ankit Anand, the district collector — the head of Bastar’s government administration. The 10 include five Christians and five of the attackers, he said.

In the wake of the violence, more than 100 police officers are camped in Madhota.

“Yes, policemen are there in the village,” Anand said. “We have to maintain law and order.”

The roots of the trouble go back a week, in the village of Bhanpuri. That’s where Dinesh Kashyap, a member of India’s Parliament from Bastar, washed the feet of some Christians and declared they had undergone “ghar wapsi,” or homecoming, to Hinduism.

Kashyap is a member of the Bharatiya Janata Party, the political home of Hindu nationalism and which won a majority in the national Parliament in elections earlier this year.

The Bhanpuri event raised tension between Christians and fundamentalist Hindus in the region. In Madhota, traditional drumbeats summoned residents to assemble with government officials and police on the morning of Oct. 25 to discuss the resulting “simmering tension.” Christians gathered awaiting the officials, Pannalal said.

“But the officials never came,” he said. “Fundamentalists came in a truck and attacked the Christians.”

Several hundred Hindu fundamentalists had been camping around the police station, in

Bhanpuri, demanding that the case against them be withdrawn, said Rev. John Daniel, president of the Bastar chapter of Chhattisgarh Christian Forum and a Pentecostal minister.

“I have been here for 40 years. Whenever Christians are attacked, this is the pattern. Before the Christian victims would reach the police station, the attackers would have filed a case against them with the police. That’s why innocent Christians have been arrested,” Daniel told World Watch Monitor.

Anand, however, said the two Christians who were arrested had been released Oct. 29, while the four Hindus, charged with more serious offenses, are still in detention.

“We have been getting complaints these days that Christians are not even allowed to draw water from the (common) tube wells,” Daniel said after attending an Oct. 29 “peace meeting” convened by the district collector.

Elsewhere, police are preventing Christians from entering the hospital at Jagdalpur, 30 kilometres from Madhota, to which injured Christians had been rushed in a truck, Pannalal said.

Asked on Oct. 29 whether police have filed any case against Dinesh Kashyap, the Member of Parliament who conducted the “reconversion” ritual in Bhanpuri village, Anand said “I am not aware of such a report and no Christian has mentioned it in their meeting with me today or given in it in writing.”

A day earlier, on Oct. 28, the Indian Express, a national newspaper, reported that “the present controversy is rooted in an attempt by the right-wing groups to take these converted tribals to the Hindu fold.” It referenced the MP Dinesh Kashyap, saying he “had visited the [Bhanpuri] area and initiated” the reconversion of Christians in the village.

When World Watch Monitor directed Anand’s attention to the national headlines of a day earlier, he said: “We will look into it.”

He also said he will look into whether the present situation is linked to tension in other Bastar villages where village councils have passed resolutions that outlaw the open practice of Christianity.

“Christians had complained to us about these resolutions. I had told them that these have no legal validity,” Anand said.

Christian-rights advocates have sued the Bastar government over the restrictions. “The government has been asked by the (state) high court to respond to our petition about these resolutions,” Pannalal said. “But they have not responded to this yet.”

He said the subsequent attacks on Christians are a “ploy to intimidate us.”